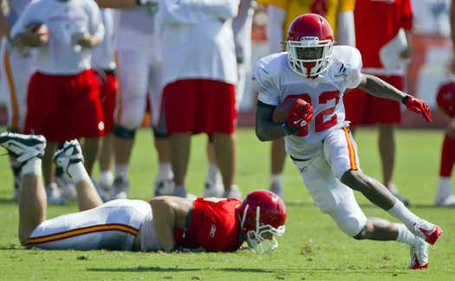 Tony Gonzalez perused the Chiefs’ roster the other day and strained to see a few familiar names.

It’s been just 17 months since Gonzalez, the Chiefs’ all-time leading receiver, was traded to the Atlanta Falcons, but it may as well have been seven years. Only 23 players — and counting — remain in camp with the club since Gonzalez played his last game in Kansas City in 2008.

"I see Brian Waters there … is Jarrad Page still there?" Gonzalez said during a phone interview on Wednesday. "I see Rudy (Niswanger) … Jon McGraw is still there, isn’t he?"

Thomas Jones can’t say enough good things about being a member of the Kansas City Chiefs.

The veteran running back, who signed with Kansas City as a free agent this offseason, enters his 11th NFL season and said he’s pleased to see his teammates working hard during training camp at Missouri Western.

"Guys are pushing each other and working really hard and doing the things we’ve got to do to get better," Jones said after Wednesday’s morning practice. "For me, it’s just a great situation for me to be in because there are a lot of guys on this team that have a lot of talent. I’m just happy to be a part of it."

When they issued their depth chart early in the week, the Chiefs listed Thomas Jones as the starting running back ahead of Jamaal Charles. That’s consistent with the way they’ve lined up during training-camp practices. Jones unfailingly is sent out with the first team before Charles.

Coach Todd Haley said that situation would probably continue for the foreseeable future. But he also added, "I wouldn’t hold me to anything on the depth chart right now."

Haley has indicated there will be enough work to keep both players happy.

Wednesday in Chiefs camp | Jones has edge over Charles for No. 1 running back; practice moves indoors; Pioli happy with camp from KC Star

Chiefs starting wide receiver Chris Chambers, got married in Las Vegas, NV on July 24, 2010 according to the Clark County, NV Recorders Office. The jaw-dropping part of the story is that he married Stacey Bernice Saunders, a woman with whom he had an affair while he was married and playing for the San Diego Chargers. She is also someone that he filed 11 separate misdemeanor counts of stalking and harassment against in 2009.

Chambers asked the Court for a restraining order against Saunders in the summer of 2009 because she reportedly "launched an incessant attack verbally on me, and now my wife, her mother and sister." According to the San Diego Union-Tribune, Chambers said the texts, e-mails and phone calls he and his family received were "abusive, vulgar and irrational,".

Kansas City Chiefs training camp: WR Chambers weds his former stalker; nothing else can top that from The Examiner

If there is one thing certain about this year’s training camp at Missouri Western State University in St. Joseph, Missouri it has become pretty obvious that head coach Todd Haley is running a tighter ship than the previous year at River Falls, Wisconsin.

While the Chiefs decided to move camp to St. Joseph to be closer to their fans, one thing they probably didn’t anticipate was the sweltering heat during the month of August. While going from low to mid 80s in River Falls, the Chiefs are now practicing in mid to upper 90s in St. Joseph.

During my three day stay in St. Joseph to get a glimpse of the 2010 Kansas City Chiefs I noticed that things are definitely different not just in location but the attitudes and conditioning of the players.

We preface this post by saying that we have a man-crush on Kansas City Chiefs WR/KR/RB Dexter McCluster. We caught a whiff of McCluster last year when he shat (it’s not swearing if you use a made-up, improper form of the word) upon the University of Tennessee while running for Ole’ Miss.

Now with the Chiefs as a second-round pick, McCluster is being listed as a wide receiver, which darkens our hearts a bit, although we’ll have to see how they use him before we pass judgment. (KIDS’s ALERT: You should only pass judgment in cases where you know someone else’s beliefs are wrong and not what god wants. Just a little tip).

McCluster gets reps at tailback from Off the Record

Celebrities and NFL legends were at Bluffs Park earlier this month to compete in the EA Sports Madden NFL '11 Pigskin Pro-Am. The game, which aired Sunday on ESPN, prmoted the release of the EA Sports vide game "Madden NFL '11...

With the victory, the fans in sections that were designated for Gamers fans took home a free copy of "Madden NFL '11."