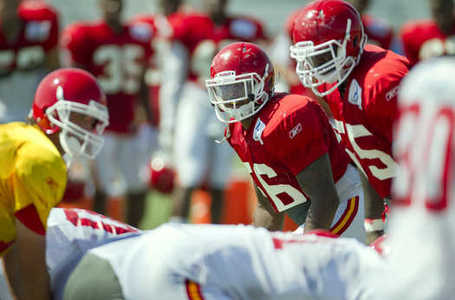 Happy Wednesday, Chiefs fans. I'm a little bummed because the one practice I had a shot of seeing this trip was this afternoon. That practice in now indoors and closed to the public. Oh well. Enjoy your Kansas City Chiefs news.

Asamoah, the Chiefs third round draft pick in this year’s NFL draft, has caught the eye of Chiefs coach Todd Haley through the first two weeks of training camp at Missouri Western, enough for Haley to say he feels comfortable playing Asamoah at either guard position.

"This young kid, I like him," said Haley at Tuesday’s press conference. "He’s a tough guy, as all (offensive linemen) have to be when they play an offensive like position. They’re selfless. They’re tough. They’re nasty. They’re ornery. Those are the good ones and that’s the disposition that you’re looking for in that position, and he seems to have it to this point."

Chiefs coaches are experimenting with the 6-foot-4, 305-pound lineman from Illinois from News-Press Now

Other than Crennel calling the shots on the sideline and Berry roaming the deep middle, the Chiefs will line up defensively the same as last year. Crennel was a bit more eager than Haley to see exactly where the Chiefs stand.

"All I can do is try to get these guys to fit where they need to fit," Crennel said, "to be physical and aggressive and have great effort to the ball and hopefully that will pay off in the running game."

At times, the Chiefs appear to have reason for hope. Berry looks like he’s making a difference and several defenders have turned in the type of big plays that were all too infrequent in recent years.

There are also times when the Chiefs look like they did last year. The Chiefs were 31st against the run and 30th overall defensively last year among the NFL’s 32 teams

Today: Mostly sunny and hot, with a high near 97. Heat index values as high as 112. Calm wind becoming south southwest around 6 mph.

Tonight: Mostly clear, with a low around 76. Light and variable wind.

Chiefs quarterback Matt Cassel said Tuesday that he’d like to play the entirety of Friday’s preseason opener at Atlanta, adding that he’s eager to compete against defenders who aren’t his teammates.

"Everybody, to a man here, is ready to start hitting somebody else, start sweating against somebody else," Cassel said. "It’ll be fun to get out there and be a good challenge for us.

"In these games, you never know how much you’re going to play, and so I’m preparing to play the whole game if I have to."

New Chiefs offensive coordinator Charlie Weis has become known for improving the play of the quarterbacks under his direction.

During an 11-on-11 scrimmage that pitted the first team offense with the first team defense, Cassel zipped back-to-back bullets to tight end Leonard Pope and wide receiver Dwayne Bowe. Cassel hit Pope on a crossing route and then hit Bowe on an out route.

When it was Croyle turn, he threaded a touchdown pass between four defenders to tight end Jake O’Connell, which caused the players on the sidelines to erupt.

Both Cassel and Croyle said Weis has already made a difference.

Chiefs Among Us: Cassel on Weis' impact from News-Press Now

One week of training camp is now in the books, and the Kansas City Chiefs  and their fans have to be excited about what they've seen thus far.

After spending a full day watching practice in St. Joseph, MO earlier this week, I can say that while there are still areas with plenty of room for improvement, there are a few areas where the team already appears to have turned the corner.

Here are my early camp impressions through the first week:

The good news for Chiefs fans is that this team has improved over the offseason. The bad news for Chiefs fans is that Oakland and Denver improved more than Kansas City did over the offseason. It'll take another solid draft and free agency for this team to be in position to win the weak AFC West, and another year or two for them to have a shot at making some serious noise in the playoffs. While the Chiefs are headed upwards, they still have quite a way to go before they get where they want to be. - Hank Koebler, IV

Clarence Duncan Park is where Berry, from ages 5 to 13, put down roots in football a few miles from the HUD home his parents fixed up and quickly filled with their sons’ trophies.

Back then, Berry needed the park. Recently he returned because the now-ragged 50-acre park really needs him.

"If you got hurt at Duncan Park, if you weren’t dying, you just did it [kept playing]," Berry, 21, said. "I did that for seven years. That’s how I built [myself] to be tough. ... I think we were brainwashed because we thought we could do anything."

Today there’s no playground equipment. The pool is drained. In late spring, the football field's weeds were so high that the tops of blocking sleds looked like mailboxes.

Enter Berry, who felt such pride in his roots that he intended to wear his Fairburn Flames T-shirt on stage in New York at the NFL Draft. Later he realized that to make a difference, he had to get in the dirt again.

After a whirlwind tour of the East over the last two weeks ­ stops at the Redskins, Ravens, Eagles, Giants and Browns – I'm back in town for a few days before heading into the Midwest this weekend. I'll be visiting the Kansas City Chiefs and St. Louis Rams.

In years past when I've visited the Chiefs I've had to travel to Wisconsin. The Chiefs trained at Wisconsin-River Falls from 1999-2009. But they moved back to Missouri this summer to train at Missouri Western University in St. Joseph.

What type of test are you expecting from QB Matt Cassel and the Chiefs passing?

"I have not spent any time on Kansas City. We will be starting the four defensive backs that started the last game of the season. They’re young guys, even though they have a lot of games under their belt they are still young and seeing things. It’ll be a test for them. Matt Cassel has been a very effective quarterback. We don’t know what to expect. We’re not going to game plan for those guys, we’re just going to go out and play. We don’t actually get into game planning until game three of the preseason."