The Kansas City Chiefs coaching staff has a unique coaching style. You've got Charlie Weis, who quickly became a fan-favorite once some people heard him on the field. Then you've got Romeo Crennel, who is one of the best defensive coaches who has also filmed a Coors Light commercial.

Then you've got Maurice Carthon. He's close with Todd Haley and definitely had a unique coaching style. Like Weis, he's loud on the field.

But he also likes to get creative.

He did that last week by putting players in the porta-potty on the sidelines and throwing them the ball. Someone would sit on the pot and another would stand at the door. Carthon would fire the ball at the porta-potty and the door would swing open at the last second and the person inside would have to catch it. 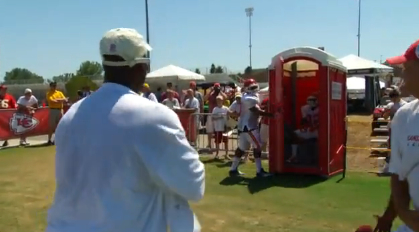 If you take out the idea of sitting in a porta-potty, it actually seems like an effective drill because it requires concentration.

Carthon told reporters on Monday that the idea isn't his and it actually dates way back to 1994 when he first joined the Patriots.

"My first year of coaching at the Patriots I learned that from Mike Pope. He really did a good job through all the years with the tight-ends he coached and I was wondering, asked him one day you know he had everything to sort of make his guys better.

"I thought that was a great drill and you think about it and you start doing it, I haven’t did it in a while but it’s a good concentration drill, I think, you know for hands, eyes, and getting the ball and getting your hands up quick."

So there you have it. More than you ever wanted to know about porta-pottys.