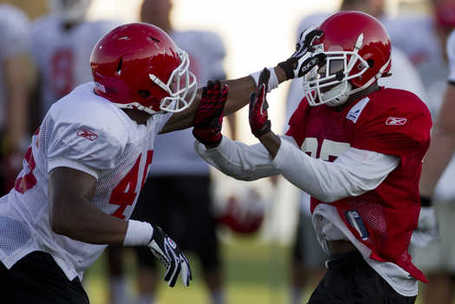 Hello Chiefs fans. Another day closer to the Falcons. Enjoy your Kansas City Chiefs news from across the internet.

For the first time since February, Weis addressed reporters and outlined some of his plans as the Chiefs’ offensive coordinator. He said that he likes what he sees and that he has fit well with head coach Todd Haley and the rest of the staff. He added that he especially likes the players he’s in charge of.

For better or worse, the Chiefs have Matt Cassel at quarterback. And Cassel was Weis’ top priority when Weis, a former New England coordinator and Notre Dame head coach, was hired in January. Weis said he pored over Cassel’s snaps from last season, identifying flaws and trying to think of ways to eliminate weaknesses. Then Weis looked at each snap from 2008, when Cassel filled in for the Patriots when Tom Brady suffered a season-ending knee injury.

The Chiefs were at or near the bottom in passing offense, total offense, passing defense, rushing defense and total defense.

Despite those numbers, both Weis and Crennel said there’s cause for optimism heading into the 2010 campaign.

"I think that, between Todd and Romeo and myself and the rest of the coaching staff, I think that we should expect improvement," said Weis, who comes to run Kansas City’s offense after spending five years as the head coach of Notre Dame. "There’s always peaks and valleys, but I think there’s been a steady climb of progress and I think that we’re becoming a much tougher team."

A coordinated effort from News-Press Now

Tonight: A slight chance of showers and thunderstorms. Partly cloudy, with a low around 76. South wind between 3 and 9 mph. Chance of precipitation is 20%.

Brian Waters took his place as the starting left guard for the first time at training camp after missing several practices because of an undisclosed leg injury.

Waters didn’t take all of the first-team snaps, leaving some for Ikechuku Ndukwe.

"I felt good today, but we’re being a little cautious," Waters said.

Chiefs’ Monday day in camp: Waters in lineup at practice from KC Star

The Chiefs issued a depth chart today in advance of Friday's preseason opener in Atlanta. It for the most part follows the form of the way they've lined up at training camp.

No surprises on depth chart from The Red Zone

Maybe it was the heat or simply the effects of a long two-a-day practice coming to a close, but something sparked a short onfield fight between fullback Tim Castille and cornerback Donald Washington on Monday evening.

Near the end of the two-hour practice, Kansas City was practicing running plays an 11-on-11 scrimmage when Castille, the Chiefs’ starting fullback last year, took a handoff, burst through a hole and ran into the secondary.

With training camp in full swing, and the first pre-season games for many teams right around the corner, there are many players who are starting to emerge around the NFL. In Chiefs camp, there are some familiar names that are starting to play well, and some new names that are quickly becoming known on this team. I took a look at five Chiefs who have been playing at a high level at training camp for this piece
Kansas City Chiefs 2010 Training Camp: Five Players Who Have Stood Out from Bleacher Report

BOTTOM LINE
Cassel's numbers will moderately rise. Kansas City has given him some more weapons and Weis' influence will help him. But it probably won't be enough to garner a fantasy roster position to start the season. If the Chiefs offense shows vast improvement early, then grab Cassel off the waiver wire. There are too many better options to start the season off to be your fantasy No. 2 QB.

It is also a refection back in NFL history to a lot of good players that have played the game and left many lasting memories for us the fans. One particular player that I had the pleasure of interviewing recently is Bill Maas. Bill played his college football at the University of Pittsburgh and created a great reputation there for his tenacious play at Tackle. He is known for his great game in the 1980 Gator Bowl where he recorded a sack and blocked a punt in route to the Pittsburgh Panthers win over South Carolina.

Bill earned All-American honors in 1982 and played in the East-West Shrine Game then was selected as the fifth-overall selection in the 1984 NFL draft where he was drafted by the Kansas City Chiefs. Bill continued his great play his first year as a Kansas City Chief and being their first-round draft choice as he also earned NFL Rookie of the year honors.

Bill Maas played for the Chiefs from 1984-1992 and played one-year with the Green Bay Packers in 1993. My interview with Bill is below:

Bill Maas, Former Defensive Tackle for the Kansas City Chiefs from The SOP

Two years ago, the Chiefs announced they were a 3-4 defensive team, although they lacked the three linemen, or the four linebackers, needed to make it work successfully. The secondary has garnered recent attention by adding quality draft picks to play along side its talented, young corners. The verdict is still out for the defensive line with two first round prospects, but without a dominating nose tackle.

The Right Four from Arrowhead Addict

26. Kansas City Chiefs -- Charlie Weis will try to recapture some of the spark Matt Cassel showed in his 2008 fill-in run for Tom Brady.

As a member of the 1979 City Series champions, quarterback Garcia Lane was one of the most dynamic players of the past thirty years in the valley. Lane, father of Hubbard standouts Shaun and Ben, played football at Ohio State where he was a three-year starter in the defensive backfield. Garcia competed in the start up United State Football League (USFL) for the Baltimore Stars and head coach Jim Mora. Lane was selected by the Kansas City Chiefs in the 1984 NFL Supplemental Draft. He played in all sixteen games as a rookie in 1985. Lane returned 13 kickoffs for an average of 20.7 yards and 43 punts for 8.9 yards per clip.

Robbins' first head coaching job was at John Battle and he also had a stint at Christiansburg, but found his greatest success at Powell Valley. The Vikings won seven state titles under his direction and produced a plethora of college players.

With over 300 career victories, Robbins is a Virginia High School League Hall of Famer and has helped cram the trophy case at Powell Valley with Lonesome Pine District, Region D and state title hardware.

Yet, he felt it was time to move on.

End of an era: PV's Robbins will retire after 2010 season from TradingMarkets.com

Brown was a fifth round pick of the Chiefs in 2009 and signed a three year deal worth $1.34 million. Brown was able to find a silver lining in last season. Despite the fact that he was not on the field, just attending meetings and watching film, helped him learn so much more about the game.

Dave Riggert of ESPN 1550 in St. Joseph caught up with Brown after a recent practice and that interview is featured on our latest Press Box Podcast.

Colin Brown trying to bounce back (PODCAST) from MissouriNet

While McCoy and Charles have a lot in common, the deciding factor on draft day should be potential. Who has the best chance to be a top-10 running back at season's end? I'm leaning toward Charles even though he'll begin the season sharing carries. Remember, Jones is old for a running back (32) and Kansas City's woeful offensive line won't create as many inside holes for him like in New York. Instead, the Chiefs will lean on Charles' outside speed to break off huge runs.

When to Draft Him: Dexter McCluster is currently going in the 12th round of most mock drafts at FantasyFootballCalculator.com – after rookie receivers I have ranked behind him. Although the Buccaneers’ Mike Williams has a better opportunity to become an every-down starter, I think McCluster landed on a team that will use his skills more efficiently and he’ll ultimately be more productive. He is my dark-horse candidate for rookie of the year.