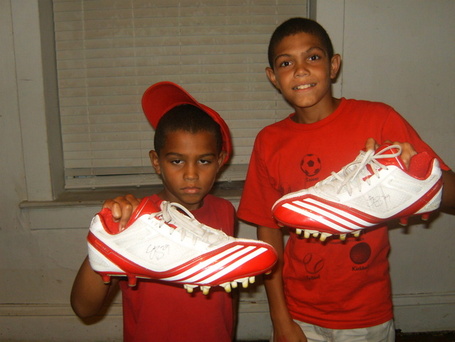 [Editor's Note: Great story and thanks for sharing it. - Joel]

First and foremost, I'd like to start off this post by saying just how awesome it is to have a young man like Eric Berry on the 2010 Kansas City Chiefs.

Before heading up to Saint Joe today to watch the evening practice session, I had heard good things about Mr. Berry, you know normal stuff, he's a character guy, he always stops and gives kids autographs, etc.

But even all these good and positive statements could not prepare me for the awesome human that Eric Berry proved himself to be tonight.

After a two hour practice in 100+ heat, Berry made a B line straight for the autograph seeker section and silently started signing memorabilia on a day where the heat made it miserable enough that only one other Chief stopped to sign (Brandon Albert).

However Mr. Berry's commitment to the fans outlasted Albert's and long after he had gone inside, Berry was still out there signing.

Now, I have never been much for autographs; however, I had my two grade school aged nephews with me and, like all kids, autographs are king in their eyes.

So, when they approached Mr. Berry and he readily autographed both their football and their hat, it was not so much of a surprise as it was greatly appreciated; but what Mr. Berry did on this night went a step further than I believe anybody could ask or expect out of a pro player. A camp staff member had previously given my nephews a heads up that players sometimes give away their gloves after practice and told my nephews that they should ask Berry for his. When they asked Berry for his gloves he told them that he unfortunately had already given away his gloves today. Now keep in mind he had already signed a ball and a hat for these young men.

Who could ever expect or ask any more of a player?

But what happened next floored me. Since Mr. Berry didn't have any gloves, he took off his shoes, signed them, and handed them to my nephew's.

It was an awesome to see a guy who takes his role and image in the eyes of fans quite seriously, especially in a day and age of prima donna players. Now I can't say for sure that Eric Berry will give you the shirt off his back, but he sure as hell will give you the shoes off his feet...

God bless you Mr. Berry. The NFL and the Chiefs are lucky and better off to have such a kind man as the face of their product.