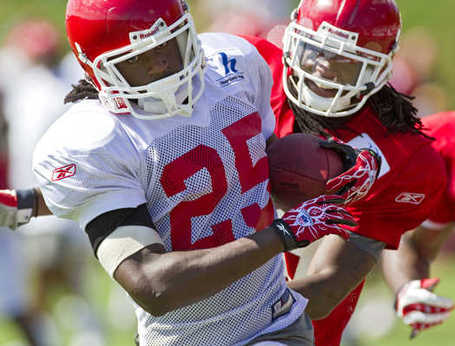 Good morning, AP. We've made it to August. Today's Kansas City Chiefs news includes what is likely the last link to the Bob Gretz site as he goes to a subscription format later today. I know there are strong feelings about both him and paid content, but I wish him the best of luck. Keep reading for lots of camp updates from around the internet. Enjoy.

From the moment he arrived at training camp a day after the rest of the Chiefs, Eric Berry has tried to be the model teammate.

He apologized to his teammates for the tardy arrival in a team meeting. During his first camp practice session Saturday morning, Berry made a veteran move by pulling quarterback Matt Cassel from the middle of a mass brawl.

There’s one thing that made the Wildcat successful at this time in the NFL and that was the element of surprise. But that’s gone now, and the effectiveness of the formation falls by 50 percent or more now that it’s become so common.

"The surprise element is gone, but you still have to take the time to prepare for it," said Haley. "That’s part of the deal."

But you can bet that if it was a big part of the Chiefs offensive deal, they would not be showing the Wildcat during practices where the media and fans are watching. They could do that behind closed doors and possibly surprise somebody.

Today: Patchy fog before 8am. Otherwise, mostly sunny, with a high near 89. Heat index values as high as 97. Calm wind becoming south southeast between 6 and 9 mph.

Tonight: A slight chance of showers and thunderstorms after 1am. Partly cloudy, with a low around 71. South southeast wind between 7 and 10 mph. Chance of precipitation is 20%.

The countdown continues for the start of premium content on bobgretz.com. Noon on Sunday, August 1 is the deadline for becoming a charter subscriber.

Final Hours To Get Charter Subscription from Bob Gretz

Whether or not the Chiefs got better Saturday afternoon is something only the coaches can judge. But from observation it was the poorest of the three sessions so far in the ’10 camp.

That’s to be expected given the amount of football in such a short period of time, with the weather conditions – hot and muggy. It’s the kind of football weather that Haley loves.

"The players probably hate me, but I like the weather," Haley said. "It’s hot, it’s sticky, it’s miserable. It means training camp. It means everybody’s a little ornery, mad, a little nasty. Those are all good things."

Here’s some of what went down in the afternoon session:

There were a handful of good plays turned in by both sides of the football on Saturday morning, but this AM’s Play of the Day goes to an overall practice performance.

Competing for a key position on the Chiefs defense, veteran DT Shaun Smith was very impressive in the club’s 9 vs. 7, inside run period. At one point Smith received praise from both Haley and defensive coordinator Romeo Crennel after successfully handling the zero technique to plug up multiple rush lanes.

Heartland Health Practice Report - Saturday AM from The Mothership

Goodell isn’t trying to be the bad guy here. He’s trying to be realistic. The New York Super Bowl is a long way off, and a lot can happen between now and then. And besides, that’s New York, and what exactly does it have in common with Kansas City anyway, other than, yes, it also gets cold there in February.

Goodell knows what the Super Bowl means to football fans. He knows what it would mean to Kansas City — or Green Bay, or anywhere else where ears perked up three months ago, those salt-of-the-earth communities where football was born and raised before it grew up.

He doesn’t want to crush your spirit or anything, but he has to say it, so here goes: "There’s a lot of challenges," he says, standing in the sun Friday morning outside Arrowhead.

After a sharp performance Friday, Bowe picked up where he left off during Saturday’s two sessions, making several tough catches and running terrific routes. He looked focused and fit, and the only time coach Todd Haley reprimanded the fourth-year wideout was when Bowe ran a crisp route to get by Brandon Carr and stopped after the catch to pose for fans. Haley yelled for Bowe to "hustle back" to the huddle.

"It’s carrying over from OTAs and minicamp," cornerback Brandon Flowers said of Bowe. "He came in in OTAs and minicamp and dropped his weight, got in well-conditioned shape. He’s stepping up to a whole other level. He’s definitely like a No. 1 receiver out there."

It’s not that Colin Brown doesn’t appreciate the fans’ presence at camp — the Braymer, Mo. native signed dozens of autographs on Friday and Saturday — it’s that his roster spot is not yet secure and his eyes are focused on nothing else.

"It’s something I’ve got to try and block out," Brown said of the many people he recognizes showing up at practice. "Otherwise I’ll get to thinking about people I’ve seen up here and people that want to come up. I’m mentally trying to prepare like I’m in River Falls and go about my business. When I see people I know, I’ll talk to them. But it’s not something I really try and focus on. It’s only going to be a distraction the more I think about it, so it’s just something I try and keep out of there."

Weis, alternating between walking with a cane and riding in a cart after recent knee surgery, loudly berated his offense for loafing during a play against no defense. When he was done, shouts of 'You tell 'em, Charlie' or 'Yeah, coach 'em up' accompanied a loud ovation from the first field's bleachers normally reserved for acrobatic receptions or tackles for losses. This is our top coordinator sequence for now, that is until defensive coordinator Romeo Crennel grins awkwardly after a fan inevitably makes a Coors Light cold activated cans comment. I'm pretty sure Romeo is the only coach to return to the NFL after being cast in the Coors Light pseudo press conferences. Something to keep our eye on.

The rookie who had the most impact on the second day of the Chiefs' training camp was not Eric Berry, but the shifty Dexter McCluster.

The rookie from Ole Miss resembled a high school player in the two practices, and not just because of his size (5-foot-8, 170 pounds) but by lining up at lining up in numerous different spots to help his team.

McCluster scorched the defense with big gains in the slot, showcased his open-field running ability with a 20-plus-yard jaunt on a wide receiver screen where the diminutive rookie lined up near the sideline, took handoffs at running back and was heavily involved in the Wildcat either as the quarterback or the in-motion receiver that takes or fakes a handoff.

But Horn got another break with the CFL adding an expansion squad, the Memphis Mad Dogs, in 1995. The Mad Dogs picked him in the expansion draft, and he rewarded them with 77 catches for more than 1,000 yards.

Numbers like that drew interest from NFL scouts because he was still eligible for that league's draft, and a dozen teams worked him out. One of them was the Kansas City Chiefs, who sent running back coach Jimmy Raye to put the fellow Fayetteville native through his paces.

Horn already had worked out for teams such as the Carolina Panthers and the Philadelphia Eagles, but his 40 times were in the mediocre 4.5 to 4.6 range. So he returned to Fayetteville to work with Stoker, his former track coach, and fine tune his speed.

When he dropped a 4.35 on the soccer field at Methodist, Raye didn't believe his watch. Horn's agent, Ralph Vitolo, had marked off the distance, and Raye wondered if his measuring tape had been a little short.

ChiefsPR http://twitpic.com/2ah88h Thanks to all of the Chiefs fans in attendance at training camp today.

JoshLooney Defense only allows one completion on 8 snaps to close out practice...all three QBs repped...good flow from LBs and DBs