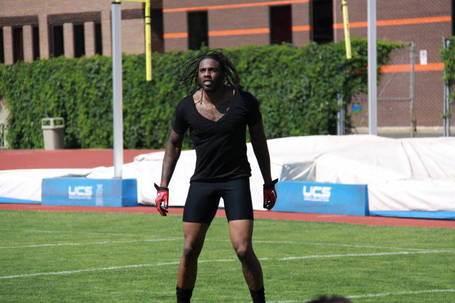 Friday! For a short week, it's taken forever to get here. Work is currently kicking my butt, so I have to skip the tweets again today and roll out early. Today's Kansas City Chiefs news consists of job opportunities, a terrible prediciton for our season, and more from the WR training camp in Minnesota. Enjoy!

It will be three weeks from Friday when the Chiefs will step on the practice fields of Missouri Western State University for the first practice of 2010 training camp.

The scene around the football side of the Chiefs facility remained very quiet this past week as coaches and players are still scattered around the country either working out or resting up for the start of camp.

That doesn’t mean there isn’t plenty going on in the league. Here’s a grab bag of news and notes.

This article includes video of the workouts and some photos.

Legendary wide receivers Cris Carter and Michael Irvin headlined the training camp's "coaching staff" - there at the request of Fitzgerald to help all participating athletes learn from some of the very best. Also involved in the camp is Bill Welle - one of the top physical trainers in the country and co-founder of Carter's FAST Program, which serves as a model for the closed-to-the-public camp and provides an atmosphere that allows athletes to get the very most out of their training.

NFL Pros Work Out on Campus from GopherSports.com

Contemporary Services Corporation (CSC), the world's largest event security firm, will be holding a job fair this Saturday, July 10, in order to recruit for the upcoming Kansas City Chiefs football season. CSC will be accepting applications and conducting interviews for a variety of positions, including security, ushers, event staff, and supervisors. The job fair will be held from 10am through 4pm at Arrowhead Stadium, inside Gate G.

If you're secretly obsessed with drumlines, or a die-hard Chiefs fan, or perhaps just a fan of applying mad amounts of muscle to drumsticks and creating glorious, cacophonous noise (or, even better, all three!) then Sunday might be your chance to live the dream, brah.

Audition for the KC Chief's rumble drumline from The Pitch

Kansas City Chiefs (1-15) – This is my pick for worst team in football.  There are only three winnable games on their schedule, and a team with so few stars is not going to find a way to win games they shouldn’t.  In fact, this is the sort of team that will lose games they could win.  Thomas Jones cannot carry this team.

First off, for everyone reading this -- TK is an avid caller to our show on Sirius NFL radio and he is one of our most knowledgeable callers.

TK, I agree with you that Johnny Robinson is deserving. One player I really believe belongs is former Dallas safety Cliff Harris. Cliff was a finalist a few years ago but didn’t make it. I think Harris and Robinson both are deserving -- I’d put Harris in first, based on my familiarity with him.