From the FanPosts. -Joel

There seems to be a lot of speculation about what roles Jamaal Charles and Thomas Jones will fill this year for the Chiefs. Will JC be the primary back or TJ? Will they split carries equally? Will one be a third down, short yardage back? I would argue that the answer lies in the past. You guys all know that I like to compare what is currently going on in Kansas City to what has gone before.

Let's break down the running backs to see if there are clues to what Jones and Charles might do...I love this stuff!!

The 1990 NFL season would see the Bill Parcells led NY Giants win the Superbowl. That year saw the resurgence of a once well respected running back by the name of Otis Anderson. Anderson had fallen from grace due in large part to injuries during his career. 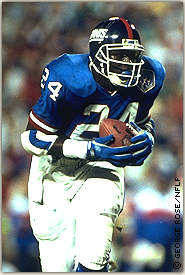 Anderson was drafted by the St. Louis Cardinals in the 1979 draft as the 8th overall pick. He did not disappoint in his rookie campaign, rushing for 1605 yards and making the pro bowl. He rushed for over 1000 yds in five of his first six seasons (the one he missed was the '82 strike year when he only played in 8 games).

Then came the injuries.

Injuries drastically decreased the number of games Anderson played each season, and his explosiveness as a tailback. After a year and a half, Stump Mitchell emerged as the Cards' top running back, and the expendable Anderson ended up deep in the New York Giants' depth chart in the middle of the 1986 season. By this time in his career, it was clear that he was better used in goal line or short yardage situations. Anderson would rush for only six yards on seven carries in the 1986 playoffs, but did score a rushing touchdown in the Giants' victory over the Denver Broncos in Super Bowl XXI.

I guess that it wasn't so clear to coach Parcells that Anderson had to be relegated to short yardage and goal line situations. Four years later, Anderson was still shakin' and bakin' and winning a Super bowl at the tender age of 33. Iron man? You bet.

In his first two and a half seasons with New York, Anderson did not fumble once in his 100 offensive touches. In 1989, Anderson become the top running back for Bill Parcells' ball control offense and was named NFL Comeback Player of the Year. He scored a career high 14 rushing touchdowns, and rushed for 1,023 yards on 325 carries. He was also the top running back for the Giants the following year, when they won Super Bowl XXV, and was named Super Bowl MVP for his 102 yards and a touchdown on 21 carries. As a testament to the Giants' ball control strategy, their time of possession was double that of the Buffalo Bills, their opponents, in the first Super Bowl without a turnover.

I wonder if Parcells ever told a running back to "protect his ball" like Haley told Charles last year? Just a thought.

This is a player that conventional wisdom said was washed up. He fit the Parcells scheme (Erhardt-Perkins) so Parcells literally picked this guy up off the injury heap and utilized his known skills to parlay a win in the Super Bowl. At 33 years of age this guy played a full season, carried the rock over 300 times, scored in and won a Super Bowl and yet he is hardly an after thought for casual NFL fans that don't live in St. Louis or NY.

Can it be that TJ has similar 'known' skills? We report, you decide.

Another iron man RB that Parcells was fond of was Curtis Martin. I have posted about him before. Parcells was the main reason that Martin headed to the Jets in 1997. I only mention him here because he was originally drafted third overall in the 1995 draft by the New England Patriots. Who was the head coach then? Oh, that's right, Parcells. These guys seem to have a strong propensity to identify power runners that don't fumble much. I like it.

Belichick had his own success with an 'older' runner with a man by the name of Corey Dillon. Remember this guy? 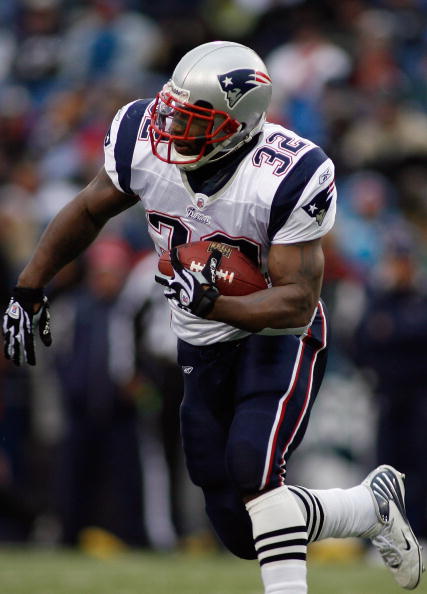 Dillon was another one of those guys that performed well out of the blocks.

Then the injury bug bit (I'm sorry, have you heard this story before?)

In 2003, Dillon only rushed for 541 yards due to injury, which, along with the emergence of Rudi Johnson, precipitated the trade of Corey Dillon to the New England Patriots for a second-round pick.

It looks like between being hurt, running his mouth and the Bengals having a handy replacement, Corey was destined to go to the junk pile. Not so, said a crafty coach Belechick. This guy may turn 30 shortly after next season begins but he fits our offensive scheme to a T.

In the 2004 season, Dillon proved himself to be a mature and dedicated team player, putting to rest the negative reputation he acquired before arriving in New England. He set career highs and franchise records with 1,635 rushing yards and 12 touchdowns. He was a major factor in the Patriots win over the Indianapolis Colts in New England's first playoff game, rushing for 144 yards and catching 5 passes for 17 yards. New England won its third Super Bowl, due in no small part to the running game built around Dillon. He was the top rusher of Super Bowl XXXIX with 75 rushing yards and a touchdown, while also catching 3 passes for 31 yards, for 106 total yards. Overall, Dillon rushed for a total of 292 yards, caught 9 passes for 53 yards, and scored 2 touchdowns in New England's 3 postseason games.

Now, I don't know about you, but I don't think that this power running back, show piece of the offense, ball control offensive scheme happening on two different teams coached by two different head coaches that share the same philosophy was an accident. The doubters will continue to make this case, but fear not, I have enough Kool-Aid for any and all who wish to imbibe with me.

In retrospect it seems that Dillon was the compliment to an existing RB in New England that had already been setting a few records of his own. Namely Kevin Faulk.

Now Faulk is not a power back like the others that are mentioned here, but he is an interesting and essential part of the New England backfield and has been so for years.

Actually, if you want to compare roles, his would seem more befitting of a Jamaal Charles type player, wouldn't you think? I know, Aiken the dipstick is prognosticating wins again (sorry, just had another glass of BERRY flavored kool aid).

In 1999, Faulk was selected by the New England Patriots in the 2nd round (46th overall) of the 1999 NFL draft. During that same year, Faulk finished his rookie season with 1,358 all-purpose yards in only 11 games. He also returned a kickoff for 95 yards against the New York Jets on November 15.

In 2001, Faulk helped the Patriots finish the regular season with an 11-5 record by compiling 1,070 all-purpose yards in 15 games.

In 2003, Faulk helped the Patriots finish the regular season with a 14-2 record by compiling 1,351 all-purpose yards in 15 games (including 1,078 yards from scrimmage). In Super Bowl XXXVIII, Faulk helped the Patriots to a 32-29 victory over the Carolina Panthers with 42 yards rushing and 19 yards receiving. His biggest plays were a 23-yard run in the 4th quarter and a two-point conversion score with 2:51 left in the fourth quarter; stunningly the two-point conversion was the only score by Faulk in 2003.

As of the end of the 2006 season, he had the most receptions (276) for a running back in Patriots franchise history.

Returning kick offs for touchdowns? Compiling all-purpose yards like a runaway train? Let's see, Charles returned at least one kickoff for a touchdown last year right? He has been touted as a threat out of the backfield catching the ball right? Hm. Sounds like a new rendition of an old plan to me, but what the hell do I know?

Does Faulk epitomize the essence of the 'right 53'? I think so.

In Week 13 of the 2007 season against the Ravens, Faulk forced a fumble out of Ed Reed who had just intercepted a Tom Brady pass. The play turned out to be crucial to the game and the 16-0 season, as it let the Patriots score a field goal on that drive. The Pats won the close game, 27-24

His loyalty and devotion to the Patriots team mentality has been applauded on by multiple announcers, coaches, and other players. Bill Belichick once said in a press conference, "Kevin would be willing to stick around no matter what. Heck, he'd even sweep the floor if it contributes to this team. He's a great person."

I'll bet that was good enough for Pioli and Haley anyway.

So...have we made any progress with our quest here? Any clues to what you will see in the Chiefs backfield this fall? Does the fact that the Chiefs didn't spend a bunch of money on free agent wideouts make any more sense now? How about the fact that the offensive live was addressed in the way it has been? Does that make anybody wonder (even a little)?

I submit that Jones is another one of those power backs in the long list of them that has been identified and utilitzed by the Parcells tree of coaches. Barring injury, he will be the featured back in our offense this year. Charles will see playing time and will be utilized in the Kevin Faulk role much more than the primary back role that TJ will occupy.

I know that everybody thinks that Charles is the guy, but his size is still a bit limiting for him to take the pounding that the power guy has to take. If TJ stays healthy, I would expect him to have 1300 yds rushing and 12 touchdowns. If they use Charles in the 'other' role, I would expect at least 1500 all purpose yards and 5-10 touchdowns. I also believe that the term, ball control offense, is what Haley et al are looking for. They will want to grind it out every time they touch the ball on offense. That my friends is a return to the roots of the Erhardt-Perkins. One other small item here: Charlie Weis ran the offense for both Parcells and Belichick during the tenure of the above players. I'll bet Charlie is dug in so deeply right now with the Chiefs play book you would need a crow bar to pry him out.

Because of this, I expect a fiery finish to many games this year, hence my analogy to the Kardiac Kids earlier this year. If the Chiefs make the playoffs, it won't be by blowing out our opponents. It will be by razor thin margins that will delight our fans by the thousands.

Mr. Irrelevant had best lace up his best shoes. If the Chiefs make the playoffs this year, it will most likely be by a foot or less.