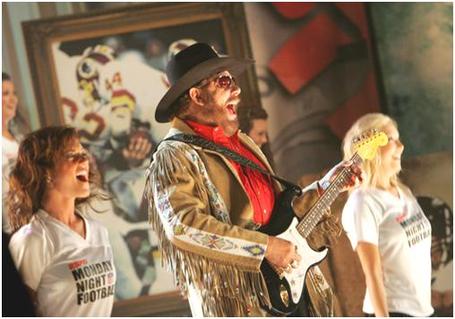 Good morning, AP. I hope everyone had a terrific holiday. Today's Kansas City Chiefs news kicks off much like the season will, with a little Hank Williams Jr, then leaps right into an in depth season preview from The New York Times. The photo used in the Bob Gretz article was too good to pass up, so I used it above. Enjoy.

That’s Hank Williams Jr. above, and he was in a Nashville studio last week recording show openings for ESPN’s broadcasts of Monday Night Football.

Williams’ ditty "Are You Ready For Some Football" has been the Monday night opening for many seasons now, written after his hit "All My Rowdy Friends (Have Settled Down)." It will be part of the show open on September 13 when the Chiefs and Chargers at Arrowhead Stadium are the second game of the opening Monday doubleheader.

Are You Getting Ready For Monday Night? from Bob Gretz

It happens every year. A dreadful team comes out of nowhere and achieves instant success. It’s like sex scandals for politicians: they’re so common that specific examples need not be cited. So instead, let’s just cut to the chase. Can the Kansas City Chiefs be this team in 2010?...

...If these building blocks are in place, it will be the subtle elements propelling the Chiefs over the top.

So what are these subtle elements, exactly?

Start with the rest of the coaching staff. The Chiefs made headway in their mission to become the Patriots of the Midwest by hiring Charlie Weis to coordinate the offense and Romeo Crennel to handle the defense. Hall of Fame defensive back Emmitt Thomas was brought in to take charge of the youthful secondary. Haley, an erudite play-caller, showed humility in turning the offense over to Weis.

This is the finale of our four-part evaluation of the Chiefs roster a month ahead of the teams trip to St. Joseph and the start of 2010 training camp.

Understand this about the rankings – they are meant to provide information and create talk. I’ve based the grades and whether a player’s career is going up or down based on what I’ve seen and what I’ve heard about each of those 81 players. The difference in numbers is negligible. Whether a man is rated No. 12 or No. 18 doesn’t matter so much as the designation that they are part of the top 20 players and should be major contributors to what Scott Pioli and Todd Haley are building at Arrowhead Stadium.

Whether you are a seasoned wine aficionado or novice sipper, the many different delectable flavors of wine, food and ambiance at Lawrence’s 12th annual Salute! are sure to whet your social palate.

...Salute! celebrity co-chair Kendall Gammon, retired Pro Bowler for the Kansas City Chiefs, says that he enjoys promoting the festival because it is different from most other charity benefits.

"A lot of the time, you read about the charity and maybe see some pictures," he says. "But to experience it firsthand and actually meet the people that benefit from Salute! gives you a sense of how important a cause it is."

Salute to the senses: Cottonwood fundraiser pairs best of food, wine from The Lawrence Journal-World & News

"Most of the stuff we run I learned from the Chiefs," Grunhard said. "We run a lot of the same terminology, patterns, route gaps that most major colleges run. Our practices are very similar to what they do at OU."

There are various pigeon holes that coaches can be placed in, you know the boy wonder types, the long-time assistants finally getting a shot, Joe College coach trying to make it in the NFL, the schemer types, the nice guy types, the coaches who would have sold their first born if it got them a head coaching job.

And then there was Don Coryell. He didn’t fit any of the pre-conceived notions of what type of personality the leader of a football team should be, other than the fact he could win games. He was the first man to win 100 games or more in college football and pro football.

But he was different.

BCarr39 At this Princess breakfast and this waitress keeps callin me "My Lord". #Royalty lol

BCarr39 Magic Kingdom was wayyy too crowded. Hollywood Studios is more like my cup of tea...my baby loves acting! #dramaQueen

almighty31 Bout to head back to KC n a couple minutes

mortreport On this day, we celebrate our freedoms, and I remember my neighbor, Eugene Markwell, KIA in Vietnam combat on July 4, 1967....Thanks troops!

JPosnanski Strange to spend Fourth of July in South Africa ... but special too. People wander up to wish an American a Happy Fourth.

HermEdwardsESPN They should improve from 30th,which was last years ranking.RT @ghoneycutt: can KC defense improving enough to crack a top 10 new coordinator

mortreport I was on a drive from Atlanta to Arkansas when someone called about McNair's death; reached Jeff Fisher on USO tour; devastated last July 4

mortreport RT @WhitlockJason: Is the Sports Reporters no longer shot in NYC? Where is that set today, Bristol? >> Yes. ESPNZone in NY has shut down

ChiefsPR Happy Birthday America. Take a moment today to remember all of the men and women who protect our freedom.