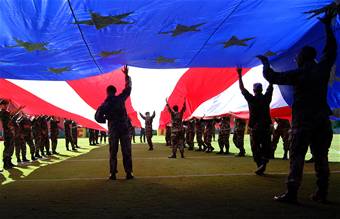 Hopefully you are enjoying the Fourth of July weekend. Once the smoke and noise clears from the fireworks the ticking clock of NFL training camps will be even louder.

The evaluation of the 81 players that the Chiefs continues today as we get to the top-half of the roster with the middle 20 players and what they have and can provide the team.

As we’ve noted throughout this series, each player with NFL experience has been given an arrow up and an arrow down. Those going up are ascending players or guys that have potential to make great improvement. Those with arrows headed down are descending players.

Two Southland student-athletes concluded their collegiate careers in impressive fashion by being chosen 2010 Medal of Honor winners by the Big Ten.

The accolade was established in 1914, when the Big Ten endowed a Medal of Honor to be given annually to a student in the graduating class of each university who demonstrated proficiency in scholarship and athletics. In 1982, the Medal of Honor was expanded to include a senior female athlete from each institution...

...Asamoah, who was selected in the third round of the 2010 NFL draft by the Kansas City Chiefs, maintained a 3.77 grade-point average and graduated with a bachelor's degree in December. He received the Outstanding Scholar-Athlete Award for achieving the highest GPA among Fighting Illini male letter-winners in the 2009-10 senior class.

When you are the Rochester area's tallest, strongest, fastest and probably best high school

quarterback like Ashton Broyld, people pay attention to the moves you make.
Broyld, a senior at Rush-Henrietta and a two-time All-Greater Rochester team member, wants to make the jump into NCAA Division I college football...

...Ashley Sims, Broyld's father, wanted his son to also go to a camp at the University of Maryland, where the 1992 East High graduate played defensive end...

...Broyld has a family tie to the National Football League. Branden Albert, an offensive lineman with the Kansas City , is Ashley Sims' brother. Sheldon Thompson, one of Broyld's cousins, was recruited to play at Cincinnati and ended up at Mansfield University in Pennsylvania. Other cousins played in black college football conferences at Alcorn State in Mississippi and Cheney University in Pennsylvania.

If thrills are your thing, then Halloween is for you.

It will never disappoint you.

October 31, 1999 was a good day to be a Kansas City football fan — an outstanding one I should say. Said date featured a Week No. 8 matchup between the Chiefs and the Chargers that to this very moment still resonates in the memories of those who cheer for the team from Missouri.

All, because of a gimmick.

The 34-0 Chiefs victory was in itself a reason to be joyous. But the rare occurrences that took place in this ballgame are what made the contest something of a cult reference amongst the Red and Gold faithful. Between the Chargers’ inexcusable gaffe at the beginning of the game, Reggie Tongue’s quadruple play, Greg Manusky’s run of his football life, Derrick Thomas’ first (and only) INT of his career, and the overall beating of the always-detested (in a gridiron sense) Jim Harbaugh in his return to KC, it would be accurate to say that enough relevant material was accumulated to label this happening as a remarkable event.

But BrandsMart turned it into a memorable one.

The Kansas City Chiefs have long been the bottom-feeders in the AFC West. This year, the Chiefs have young, raw talent that the team has drafted over the past two-three seasons, as well as players acquired via free agency.

This list ranks the Top 10 Chiefs that will have the biggest impact on the team in the 2010 season.

Alex Reynolds embarks on his high school athletic career in August, but he arrives at Northwest Whitfield High School already an accomplished wrestler.

The 14-year-old Reynolds has a formula for success and, while it’s nothing just off the assembly line, he’s taken it to a new level for such a young champion...

..."Alex likes to spend time on the internet watching guys Eric Berry (former Tennessee All-American first round draft choice — fifth pick overall — by the Kansas City Chiefs in April) and Knowshon Moreno (former Georgia second team All-American and first-round pick — 12th overall selection — of the Denver Broncos in 2009), seeing what they do on the field," his father said. "Like I said, Alex is very dedicated. He’s serious about his sports."

And, he’s extremely busy trying to perfect his athletic skills.

The great ones never take time off.

There are two names, however, that helped coach Bowyer in his journey to fame that are not so well known in Carlsbad. These names do not appear on any buildings, highways or even signs. At face value they are far from legendary and in fact come across as quite ordinary.

But these names contributed significantly to Bowyer's legacy. They also carry a legacy of their own. This legacy, while laced with athletic achievement, lies much deeper than sport. While its cover reads from glory on the gridiron, its substance reads from prejudice in the cotton field.

Bob and Joe Kelly are their names. The following is their story...

...His time in LA, however, lasted only a year. Joe found his way into the Canadian Football League with Ottawa where he helped lead the team to a Grey Cup Championship.

The Houston Oiler drafted Bob out of NMSU in the 22nd round. He played there from 1961-63. After a few years in the Semi-pros Bob came back to the NFL, playing for the Kansas City Chiefs in 1967 and the Cincinnati Bengals from 1968-69.

Once again, as success followed him to the pros, so did the darker side of his life. He found this out the hard way while playing an exhibition in New Orleans as an Oiler against the Bengals.

"We couldn't go out on the field (to practice)," Bob said. "The blacks had to come out last. I said 'what in the world are they talking about, come out last. I'm just as good as these other people.' Coach came in and began to explain everything. We said, 'dog man, this is pro football.' You're at the top of your profession and now they want to tell you that you can't come out. That was really embarrassing."

Pride and Prejudice: Naming Freedom on July 4th from The Carlsbad Current-Argus

BCarr39 Eating with the sharks!

almighty31 time 2 watch @SwinCash on ESPN2.... tune in and watch how we do it where we r from

BCarr39 Lord knows how many miles I walked today @ Sea World. Now it's time to chow down!

HermEdwardsESPN It's the 4th right? So that means a Parade and Barbecue.Have a great 4thRT@JoeyR_: @HermEdwardsESPN Coach, what will you be eating tomorrow?

kentbabb Missed my cnxn to Belize bc of a mysterious problem with our American flight. In dallas for the nite. Should've listened to @SI_JimTrotter.

Adam_Schefter Happy birthday to our country! More important, thank you to all the people who have fought, or are fighting, for our independence.