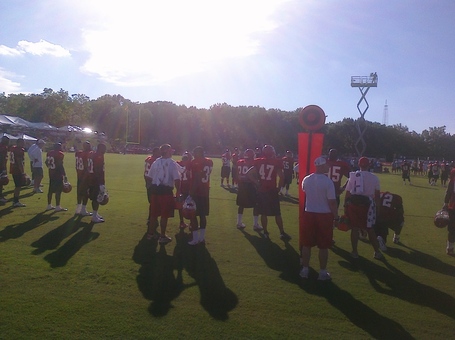 It was another hot day in St. Joe for Kansas City Chiefs training camp as you can tell with the sun beating down on us in the picture above. Since everyone else was sweating through their shirt, I didn't feel so bad. But it's days like these that the players earn their money.

Overall, I'm liking the defense. Maybe that's because my last impression of them was dominating the final 15 minutes of practice. Demorrio Williams looked solid at various times today (including a near pick-six) and the corners were on top of things.

The Chiefs kicked things off by doing some stretching. 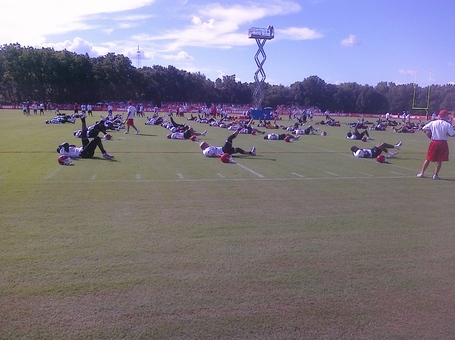 And then some running. 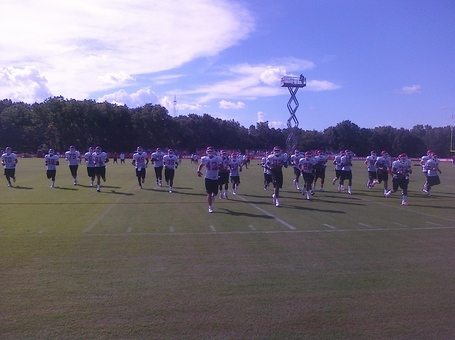 Dwayne Bowe had another solid afternoon overall. He didn't make any acrobatic catches like he did in the morning practice. In fact, he dropped one. It's good news that that's the only drop that sticks out at me through three practices.

Tim Castille drew some cheers from the crowd. In a 7-on-7 drill, Castille took off on a deep route being tailed by Corey Mays. Castille caught the deep ball in stride to the cheers of the fans. Castille has been taking quite a few first team reps. Before training camp, I didn't think he'd be a big factor but we may have to think again.

Kendrick Lewis is no Dez Bryant either. He's carrying an extra set of pads on his way back to the locker room. 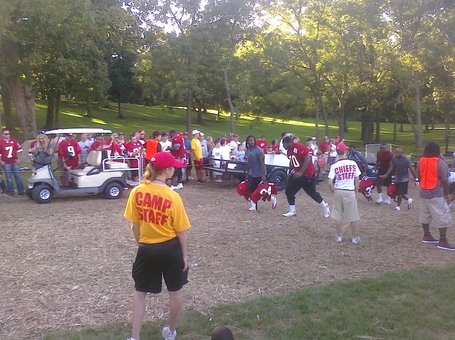 Generally you can't glean a whole lot from individual drills but there was one that caught my eye and it was probably the loudest hit of the day. Kestahn Moore was set up to block Demorrio Williams as Brodie Croyle sat in the pocket and Williams popped Moore creating a loud SMACK and then "Oohs" and "Ahs" from the crowd. Give Moore credit though. He didn't back down.

Tony Moeaki was also solid in the same blocking drills. Another reporter next to me said after one play, "Not a bad block for a guy who's supposed to catch balls." Speaking of catching balls, Moeaki had a nice one. He was running a route to the inside of the field and the ball was thrown behind. He planted his feet and reversed directions hauling in the diving pass. While it was a nice catch, there was some question as to whether he got the first down.

Thomas Jones, once again running with the ones, took a handoff for about ten yards before being touched. I would've loved to see a full-contact game and him going one-on-one against the safety in the middle of the field. 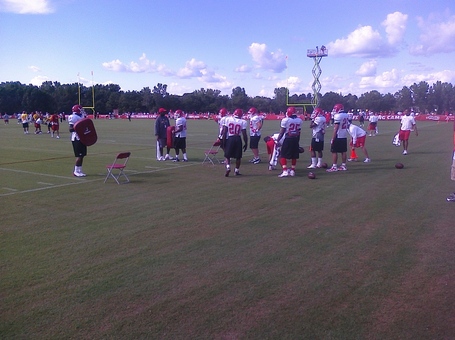 Wallace Gilberry is a guy I noticed more and more today. The Chiefs ran a lot of nickel and that's Gilberry's formation. Nothing in particular from him but he always seemed to be around the ball. 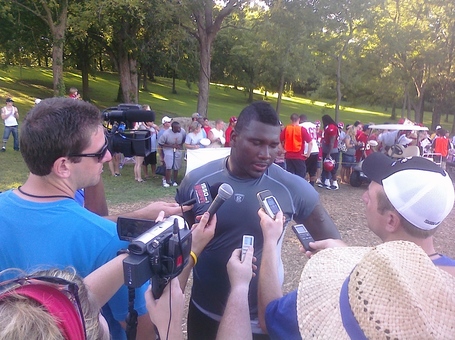 Brian Waters and Dion Gales were once again not participating in practice. We're not sure what's up with Gales but he's gotta get in there soon. But Waters did make time to sign some autographs after practice along with Matt Cassel. 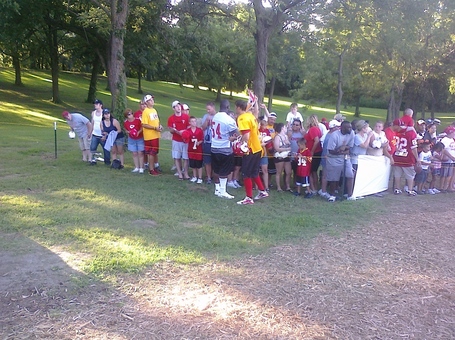 Barry Richardson popped up at times as well. He was running at right tackle and had a nice seal that allowed Kestahn Moore to scoot past for what would have been 5-6 yards before being touched.

Tyler Palko has been underwhelming through the first two days of camp. His passes just don't seem crisp and I've seen a couple communication issues (which I suppose could be the receiver's fault as well).

You know how folks always say Mike Vrabel is like a coach on the field? I saw that first-hand today. He was instructing people on what to do and conferring with the coaches on certain formations. You can tell why Todd Haley likes him. He's an asset on the field.

In team drills, the offense was backed up against their own goal line. Matt Cassel tried to hit the running back in the flat and the ball was tipped in the air and landed in Demorrio Williams' hands as he fell over. I couldn't quite tell if that was six or not.

Terrance Copper isn't a guy we've talked about a whole lot. He hauled in a nice pass from Croyle near the sidelines. Like Bowe did on day one, he planted his feet on the edge of the sideline and stretched out to make the catch.

The defense had a very strong finish to practice. Normally I'd give the advantage to the offense when everyone is so tired at the end but the defense held tight. The Romeo Crennel influence is showing. The front seven had a solid afternoon.

Walking off the field at the end of practice, there was an Eric Berry chant. 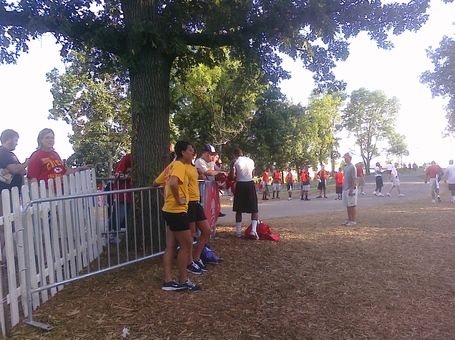