Chiefs Training Camp: A Scuffle And The Wildcat

Share All sharing options for: Chiefs Training Camp: A Scuffle And The Wildcat 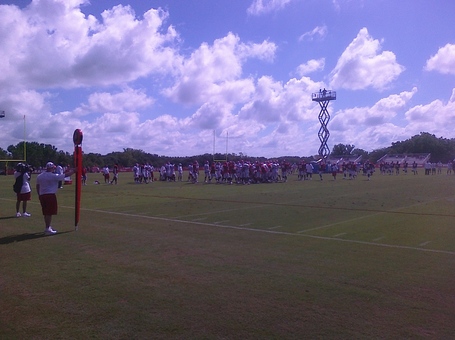 Eric Berry made his arrival at practice. We'll have some notes on him in just a bit but he was quickly plugged in with the number ones along with Jon McGraw. Looks like that spot is his to lose at this point. Kendrick Lewis and DaJuan Morgan were running with the twos.

The most interesting news of practice was the mini-scuffle that broke out. Jamaal Charles took a handoff up the middle and was brought back by the defensive line. All the big guys ended up falling on Charles. Before you knew it, both sidelines had cleared and the offense was taking on the defense but it was quickly broken up.

"I don't want guys righting fighting," Haley said after practice. "I made that clear." He said the important thing is that none of it is carried on after practice.

Thomas Jones once again ran with the first team. Haley said after practice, "I wouldn't read too much into the rotation." Just like Chiefs GM Scott Pioli said this week.

First team nose tackle was once again Ron Edwards. He was followed by Derek Lokey and then Shaun Smith.

First team inside linebacker was once again Corey Mays and Demorrio Williams followed by Derrick Johnson and Jovan Belcher.

New Chief Verran Tucker was on the field wearing No. 15.

Dexter McCluster and the other Chiefs running backs ran some of the wildcat. McClsuter is so fast that could be a dangerous play. Haley said he generally lets the "runners run and the throwers throw." In fact, he said back in 2007 when he ran the wildcat with Anquan Boldin in Arizona, he got a call from Bill Parcells reminding him of that. 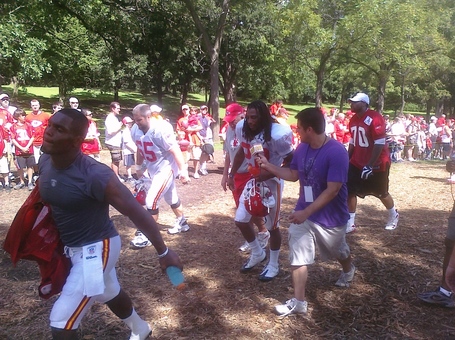 In one-one-on receiver and cornerback drills, the crowd cheered loudly when Eric Berry lined up against McCluster, who put a move on Berry and shook free.

Dion Gales and Brian Waters were once again on the exercise bikes. Ikechuku Ndukwe wasn't in the rehab zone anymore. No official word yet on if Gales failed his conditioning test, like most think. Todd Haley insinuated yesterday that Waters had some sort of injury. Looks like an ankle. 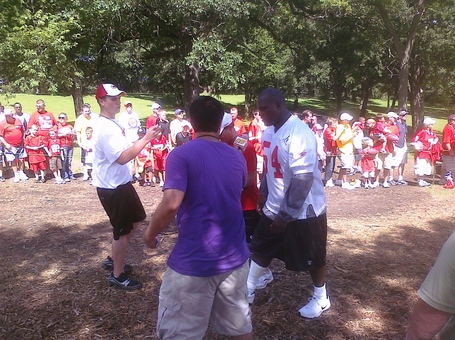 Jeremy Horne had a nice route against Jackie Bates. It was a one-on-one and Horne put on a nice stutter step to snag the deep ball.

Dwayne Bowe had another good day. I've seen a few catches from him falling over near the sidelines. He's got good concentration early. On another play, he barely beat Brandon Carr deep and leaped over him to haul it in.

"He's clearly ahead of where he was last year," Haley said of Bowe. "He's fighting to be considered one of the better players in the league. I think that's his goal."

And just like the first day, Bowe ran right past the media after practice. 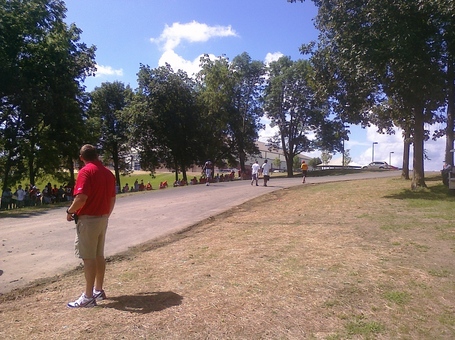 McCluster was back there returning some kicks.

At one point, McCluster came limping off of the field which caused a worrisome look from the crowds. However, it was just cramps and he was soon back out there.

For the second day in a row Leroy Banks had a nice catch. He got wide open near the end zone and jumped to make the catch and land on his feet. It's still early but he's shown more athleticism than Jake O'Connell.

The players once again signed autographs after practice. Matt Cassel was a popular one. 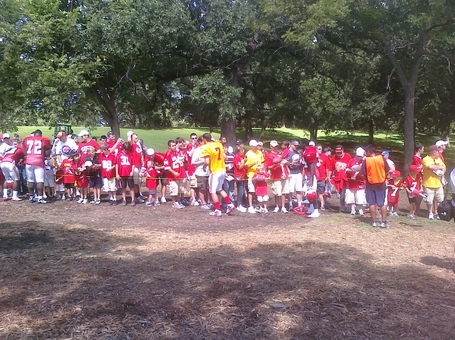 Looks like there was a fan that fainted. The mini-ambulance came out to pick him up but the guy appeared to be okay.