Share All sharing options for: Chiefs Owner Clark Hunt: 'Certainly The Greatest Outdoor Stadium Would Like A Super Bowl' 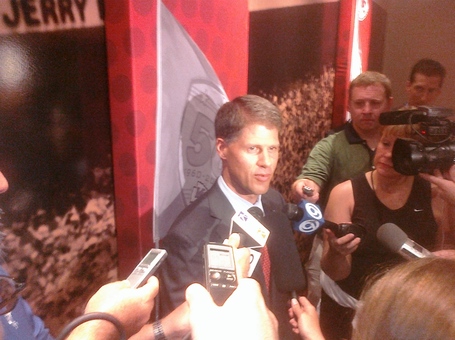 NFL Commissioner Roger Goodell was in Kansas City on Friday for the unveiling of the Lamar Hunt statue in the Founder's Plaza of the New Arrowhead.

Of course you put a bunch of people from Kansas City near the NFL Commissioner and the Chiefs owner and the topic of a Kansas City Super Bowl came up.

Clark Hunt once again said when the time comes he would be pursuing the game and has expressed that to the Commissioner.

"Having the outdoor Super Bowl in New York is really a game-changer for the entire National Football League," Hunt said. "If that Super Bowl goes well, I think there will be a lot of cities with great outdoor stadiums -- and certainly this is the greatest outdoor stadium -- who will be interested in a Super Bowl.

"The Commissioner and I had a chance to talk about it last night and he realizes in some ways he's opened Pandora's Box with the game in New York.

"We'll certainly be on the list and pursue one."

One reporter said to Goodell that it was always one of Lamar Hunt's dreams to host a Super Bowl in Kansas City.

To which Goodell (jokingly) said, "Wait, I thought his dream was to host the Thanksgiving game?"

Goodell said the Super Bowl has gotten so big that they would have to look at the infrastructure to determine if Kansas City could handle a Super Bowl. My overall feeling was that Goodell thinks Kansas City has a ways to go before hosting a Super Bowl.

But, hey, I've been wrong before.