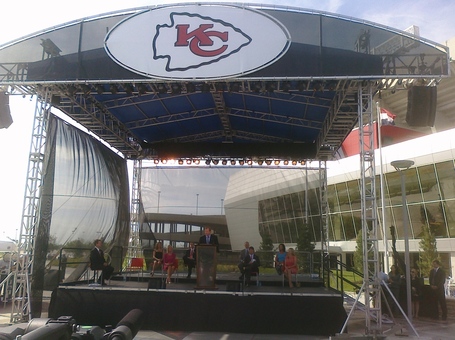 NFL Commissioner Roger Goodell, Chiefs owner Clark Hunt and the Hunt family had a special day on Friday at One Arrowhead Drive.

In the Founder's Plaza area, they unveiled a "heroic-sized" statue of Lamar Hunt. Let me tell you, it really is "heroic-sized" (look at the people standing next to the statue for a reference point). 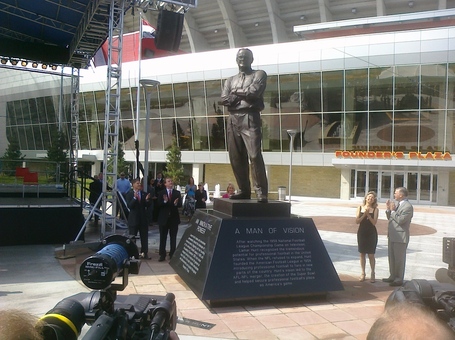 Friday was the first time Hunt had seen the statue. He said everyone one of his family members said, "Wow, that's Dad." In fact, Hunt said, "I was speaking with Jack Steadman and he said, 'I've seen your dad stand in that pose hundreds of times.'"

The statue is nine-feet tall and has Lamar Hunt in slacks and a shirt. Hunt says what he would be wearing and other details of the statue were family decisions and they couldn't be happier with the result.

Commissioner Roger Goodell was on-hand for the moment and talked about being a one-time assistant to Lamar Hunt while working for the AFC. Goodell stressed how much Hunt talked about the fans and doing unique things for the fans. He also said one of the biggest lessons he learned from him was being an innovator and never settling. 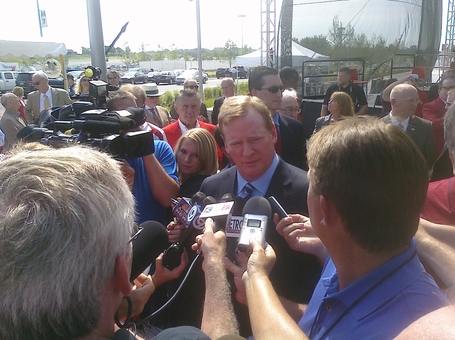 The Founder's Plaza is shaped in the form of the Vince Lombardi Trophy. Fitting considering Lamar Hunt coined the term Super Bowl when he brought his AFL against the NFL. There are fountains commemorating the eight old AFL teams as well.

And then of course there's the most famous play in Chiefs history -- 65 Toss Power Trap -- ingrained into ground. As Hunt was talking about that, I could see Goodell nodding his head indicating he knew all about it. I'm sure Lamar Hunt reminded him of that play a time or two when they worked together.

It was a good day for Clark Hunt and the Hunt family as well as what Mitch Holthus would call the Chiefs Kingdom.