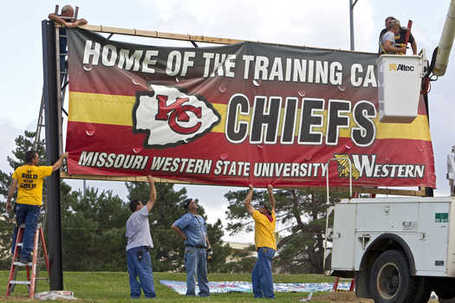 Hello football, we missed you. Welcome to training camp 2010. We have a ton of Kansas City Chiefs news for you, and most of it isn't even camp related. Skipping the Twitter posts so I can get to work on time. Be sure to keep checking back today for updates from Arrowhead and St. Joe's. Enjoy your Friday.

They trickled into training camp, some alone and others in motorcade-like clusters, into a place that’s heavy on optimism and filled with eagerness.

The Chiefs arrived Thursday at Missouri Western State University, their new training-camp home about an hour north of Kansas City. Near Belt Highway, the town’s main thoroughfare, signs welcomed the Chiefs and their fans. Some signs were more optimistic than others; one predicted that the Chiefs will finish 16-0.

Things were different than they were the past 20 preseasons, when the Chiefs trained in River Falls, Wis., a quiet college town with about one-sixth the residents of St. Joseph.

The Chiefs’ preseason picks up today with training camp in St. Joseph from KC Star

"Just left Chiefs’ training camp. Very impressive. Fans will enjoy going out to watch practices," is what Goodell posted on Twitter as he left St. Joe. He’s just the first of what figures to be thousands of visitors that will make their way up I-29 to see the team go through training camp practices.

Luckily for the Commish, he arrived after the sun went down and temperatures cooled a bit in St. Joe. When the Chiefs were checking into their rooms at Scanlon Hall on the Missouri Western campus, the sun was high in the sky, the temperatures were up and so was the humidity. It was a taste of what the Chiefs will get for the next three weeks as they roll through 22 practices in the morning, afternoon and evening.

The Heat Is On … Friday Cup O’Chiefs from Bob Gretz

What we don’t know is whether or not a pair of safeties were in the building: first-round draft choice Eric Berry and restricted free agent Jarrad Page. Both began the day without contracts, the only players left in the Chiefs world that had not put pen to paper on the dotted line.

Pioli didn’t come anywhere near the media line, not that it would have mattered since talking about contract negotiations with the press is verboten. Earlier Thursday a Knoxville, Tennessee TV station reported that Berry’s agent said they were close to a deal with the team. Chad Speck later made it known he said no such thing. "I didn’t talk to them," he said via e-mail.

A big day for the Kansas City Chiefs will start with NFL commissioner Roger Goodell at their new Founder's Plaza in Arrowhead Stadium on Friday morning and wind up with the first workout at their gleaming new practice facility in St. Joseph, Mo.

Goodell will be on hand at the Founder's Plaza when a nine-foot statue is unveiled of the late Lamar Hunt, founder of the Chiefs and the American Football League.

Coach Todd Haley will begin practice a few hours later in the team's new facility in St. Joseph. It will be the first time in 20 years the Chiefs have not camped in River Falls, Wis., and mark the beginning of what Kansas City fans hope will be a sharp upward turn following three dreary losing seasons.

Chiefs day will start with NFL Commissioner helping honour Lamar Hunt, then switch to camp from The Canadian Press

Cons: Kansas City managed just 22 sacks last year - good for 31st in the league. It was actually an improvement from the 10 they managed in '08. Still, both totals are abysmal, even if they showed some improvement.

Fantasy tip: KC is going undrafted in most leagues and for good reason. They're not worth an immediate pickup, but as the season progresses, you could consider them for one-week plays if they make progress under Crennel.

For nearly two decades, the sounds of cracking helmets and coaches whistles have echoed over UW-River Fall's Raymer Field. But on the eve of another NFL summer training , Steve Stocker just isn't the same. He is the director of Recreation and Sports Facilities for the University."No, it doesn't feel right at all," said Stocker.What doesn't feel right to him are the locked field gates and empty turf. The Kansas City Chiefs are nowhere to be found. But not only are the players gone, so too are their fans.

River Falls, Wis., was home to the Kansas City Chiefs’ training camp for about two decades — until this summer when the Chiefs relocated to Missouri for preseason camp. (The Vikings’ contract with MSU was extended through 2011 after $400,000 in upgrades were made at Blakeslee Stadium in 2007.)

Rosanne Bump, president of River Falls’ chamber of commerce, said the city held a three-day farm festival this year that attracted about 35,000 visitors to "help ease the pain."

But, according to figures she shared from a 2005 study, the city will still lose out on more than $1.4 million in local revenue (including $400,000 the Chiefs paid for food and services during that year).

With camp open, let the spending begin from The Mankato Free Press

Croyle, a strong-armed quarterback from Rainbow City, had signed with the University of Alabama when Dennis Franchione, Price’s predecessor, was head coach, but the drop-back, pocket passer was hardly ideal for Franchione’s offense, which featured option plays and required his quarterbacks to be able to run with the ball.

Following last season's success that Minnesota's Percy Harvin had working out of the slot, teams are copying the formula by drafting fast, quick receivers to work the slot and take advantage of their yards-after-the-catch ability. The Panthers used a third-round choice on Armanti Edwards, a former Appalachian State quarterback who has wowed coaches as a slot receiver in organized team activities. The Kansas City Chiefs are opening camp with second-round choice Dexter McCluster working the slot. He has the ability to run after the catch.

The increased talent base for the slot receiver is only a natural reaction to the increased use of spread offenses in the NFL. A lot of people don't realize Patriots coach Bill Belichick, a mastermind for defensive schemes, traded for Welker and let him use some of the Texas Tech slot routes that got him into the NFL as a prospect.

Offenses cashing in with inside targets from ESPN

Who was the meanest defensive player you ever went up against? Who do you think is the toughest defender of all-time?
-- Casey Martin, Telluride

FL: The meanest? I don't know who was the meanest, but I would have to say that of all the guys I played against, the Kansas City Chiefs' Willie Lanier was the toughest. Especially since he was assigned to shadow me all the time. He could hit you.

After our playing days, we became friends and he told me about their strategy. I used to line up on the extra-point and field-goal teams and Willie told me that one of the things the Chiefs tried to do was give me extra hits, thinking I would wear down late in the game. They figured if they kept me under 100 yards we weren't going to win.

Floyd Little: Looking Back at a Big Broncos Career from The Denver Post

In an action similar to the NHL's rejection of the Kovalchuk contract, the NFL rejected the Grbac contract because Grbac's voidable fifth year was "likely to be earned" but not certain to be earned. Because the fifth year was not a certainty, the NFL viewed it as an attempt to dodge salary-cap restrictions.

The NHL is taking the same position on the final five years of Kovalchuk's contract, claiming that they may be earned but they are not certain to be earned.

In his decision on the Grbac-Chiefs contract, U.S. District Judge David Doty, who has earned an enviable reputation for fairness and equity in his decisions on NFL labor issues for the past two decades, ruled for Grbac and the Chiefs, and against the league.

Small graduated after giving the Gophers three very good seasons.  He started 31 games notching six sacks over that span after coming to Minnesota from Joliet JC. Garrett Brown was one of my favorite Gophers last year.  He was very productive and a smart kid with a bright future.  His non-football future will have to wait though as he was signed by the Kansas City Chiefs as an undrafted free agent.  He'll be fighting the next few weeks for a roster spot in the NFL.  He started 32 games as a Golden Gopher and during his senior year he recorded 35 tackles and one sack.

Thomas Jones knows all about changing teams. He is quite familiar with learning a new playbook, getting friendly with new teammates and coaches and living in a different city.

Jones has played on four different teams prior to 2010, and this year he'll call Kansas City home. His previous stops included Arizona, Tampa Bay, Chicago and the Jets, and Jones has done well in making adjustments to succeed in each stop along the way.

"I'm on a new team now," Jones said in an interview with CBSSports.com. "I'm happy. I'm happy with my teammates. I'm happy with the situation that I'm in. I think I made the best choice as far as being a free agent signing with the Chiefs because of the opportunities they present. They have a lot of exciting things going on, and I'm happy to be a part of that."

"We had a hundred-something colleges coming after him,'' said Stan Wysocki, a masonry contractor for 42 years whose other two children, Steve and Millie, live a few blocks away from the house in which they were all raised. "It was getting unreasonable.''

Thinking about the pros, though, was not.

When it all went wrong is hardly in dispute. How much it contributed to the road Wysocki has traveled since is still questionable. The facts are clear and well-documented (in one case, in an ESPN feature aired during the 1990 NFL Draft): no team picked Wysocki. His friends and family had come to the house for a party and all left disappointed. But teams still had interest. The Cowboys, his favorite team, sent a scout to the house to offer a $2,000 bonus.

At the same time, on the phone was a scout from the Kansas City Chiefs, wanting to offer him $15,000. "Oh -- my -- God,'' Stan Wysocki says even to this day. The Chiefs' representative was driving up the highway, telling the father not to let the son sign anything until he made it to the house.

Chiefs fans, if you see a 6-foot, 270-pound, face-painted Raiders fan this year, run. This man is a destroyer.

The Chiefs have settled two lawsuits this year with local men who claim that a Raiders fan kicked their asses in the parking lot during a game in November 2005, according to The Daily Record in Kansas City.

Thomas Jones, Kansas City Chiefs – I’ve learned to quit writing off Thomas Jones and I’m not going to do it this year.  He is clearly the second option to the explosive Jamaal Charles in K.C. but this guy keeps getting better as he gets older.  He has a history of producing big numbers when paired with a speedster as he has proven in his years in New York when he played with "Neon" Leon Washington.  Jones has run for over 1,10o yards the last five seasons and shouldn’t be discounted this year even playing for a bad team like the Chiefs.

Fantasy Football Frolicking: No.2 RBs Who Could Produce No. 1…Like Numbers from Draftseason.com

Today: A chance of showers and thunderstorms. Mostly cloudy, with a high near 90. Heat index values as high as 101. Southeast wind around 8 mph. Chance of precipitation is 40%. New rainfall amounts between a tenth and quarter of an inch, except higher amounts possible in thunderstorms.

from The National Weather Service