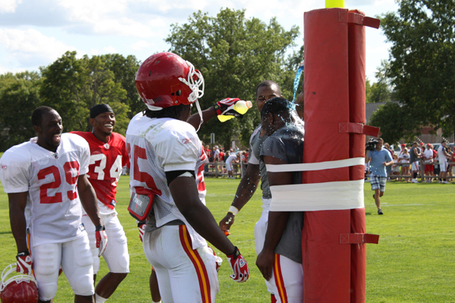 Good morning. We are one day closer to training camp, and Bob Gretz shares some of his favorite memories of camps past. From the tweets, it looks like a Chief will be welcoming a new member to his family any day now. Oh, and don't forget to buy your tickets tomorrow (if you're local). Enjoy your Kansas City Chifes Chiefs news.

Far more than any other single place in my life, I learned football sitting in the corner of the 19th Hole, a bar in the basement of a motel on Rt. 30 in Latrobe, Pennsylvania. At the end of a training camp day, that’s where the Steelers coaching staff would retire to enjoy a few beers before heading back to their dorm rooms. They didn’t much mind a few ink-stained wretches hanging around, as long as we didn’t interfere with the evening. Coaches like Rollie Dotsch, George Perles, Woody Widenhofer and many others would provide insight into the game. They were always careful about what they said about their own team, but they were always willing to shed some light on some aspect of offense or defense.

Over more than three decades there have been a lot of memories tied to training camp. As the league hurtles towards the end of camps as we know them, it seemed an appropriate time to remember:

The Jackson County sale continues Thursday. Tickets may be purchased in person between 10 a.m. and 5 p.m. at the Arrowhead Stadium ticket office or at the Ticketmaster outlets in the Kansas City area listed in the accompanying box.

Charlie Weis takes over an offensive system in Kansas City that he knows inside out. He also has a quarterback in Matt Cassel who speaks the same language. We should see some early results from that combination.

With so much training camp fodder, here are 10 things to watch from NFL.com

If they do, for some reason, start passing around the Super Bowl like weed on Snoop Dogg's tour bus, then it sure seems like the cities King mentioned -- plus the Bay Area and a bunch of other shinier locales -- would be ahead of KC in line. Especially considering that the state just jettisoned the favorite entertainment option of Super Bowl-bound men: lap dances.

So if it does happen, it probably won't be until after we're all dead. Which, when you think about it, will make it much more difficult to enjoy

ESPN analyst Herm Edwards says the better choice for rookie wide receiver Dez Bryant of the Dallas Cowboys would have been to carry the shoulder pads of veteran Roy Williams. Instead, the first-round draft pick just said no after practice at the Cowboys camp in San Antonio.

"That's something you always explain to rookies the first day of training camp," says Edwards, a former NFL head coach with the New York Jets and Kansas City Chiefs.

"There might be a veteran who asks you to pick up some pads or take his helmet. Just kind of go with flow because I can't protect you. There are too many of those guys. You can be a tough guy, but eventually they get you.

Herm Edwards: Rookie Hazing Happes in NFL, but Within Limits from USA Today

During his brief stint as an NFL Defensive End, Lesnar's WWE "showmanship" was well received by the fans, but was viewed as a sign of disrespect by fellow NFL players. Lesnar's intensity led to several "in the heat of moment" fights.

During a scrimmage against the Kansas City Chiefs, Lesnar nearly caused an all out brawl after laying out Chiefs' QB Damon Huard. Interestingly, Jared Allen was a Rookie Defensive End on that very same Chiefs team, having been taken in the 4th Round out of Idaho State in 2004 Draft. Like Lesnar, Allen was also trying to prove he belonged in the NFL.

Lesnar May Not Have Found NFL Stardom, But His 2004 Football Rookie Cards Just Might from The Cardboard Connection

My reasons for being a fan of Chiefs coach Todd Haley are not logical.  They’re not based on past achievements, or even current skills.  They are based, in part, on the notion that Haley is a potential up-and-comer.  Someone like that is more likely to buck convention and take chances, and I’m always in favor of that.  If there is one thing I’ve learned from years of studying the NFL, its that following conventional wisdom means falling behind.  In theory, a new coach is less likely to be attached to old sensibilities.  For me that’s a plus.

But the main reason I like Todd Haley is simple: he is the anti-Herm Edwards.

The Case For Todd Haley from Arrowhead Addict

Strengths: When you think about the sort of run game the Chiefs could have in 2010 with Jamaal Charles and Thomas Jones, it brings to mind the one the Titans had in 2008 with Chris Johnson and LenDale White; Charles, much like the electric Johnson, Jones, much like the pounding White.

It will be a smash and dash situation for Kansas City's offense. If Charles can dazzle in 16 games like he did in last season's final four, look out NFL.

BCarr39 You gotta walk by #faith and not by sight.

almighty31 I don't c how imma be in the delivery room... This check us she's gettin got me dizzy.. N I don't hav a weak stomach lol

almighty31 RT @arrica26: @almighty31 OMG are yall having the baby today?>> Nope.. Monday if she don't come by then

BCarr39 Okay so my daughter knows damn near all of Justin Bieber's videos!

BFlowers24 Can somebody get married n have me as the best man please....watchn all these wedding movies got me ready to attend one #random tweet

mortreport My request to get teams I missed in '09 - including West Coast - means longer drives, a couple fewer teams 4 me but we'll get all 32 covered

mortreport RT @19Yanks23: @mortreport who is covering my sorry Chiefs? How do you think they do this year? 7-9 too much to hope for? > I t's possible

JPosnanski Royals down 17-0 in 7th inning. Also known as: first day of football season in KC.