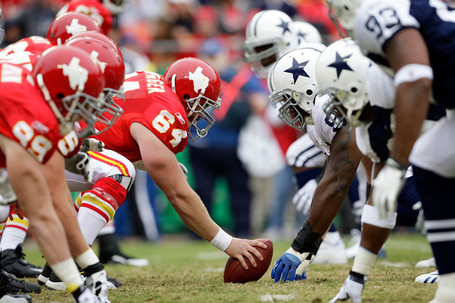 Kansas City Chiefs news all in one place? Must be the Monday edition of Arrowheadlines. Enjoy.

Already camping as of Monday were the Cleveland Browns rookies, who started on Friday, the Dallas Cowboys who kicked off on Saturday and then on Sunday it was the San Diego and New England rookies. Opening the doors on Monday will be the Philadelphia and Baltimore rookies.

By the end of the week on Saturday afternoon the only teams not in camp will be the New York Jets veterans, the Indianapolis Colts and the New York Giants. They all begin on Sunday, August 1.

As hardcore fans of the Kansas City Chiefs, we often get excited about players before they even hit the field. This is probably true of all sports fans, but in Kansas city our eyes are perpetually on the future. A natural consequence of a bleak present. If religion is the opiate of the masses, then draft picks are the opiate of Chiefs fans. We love them. We think about them. We want them to do well.

Of course, we’re also on the outside looking in. We hear what people tell us, and we know what we can find on the internet. But in most cases, we’ve never really seen these guys play. There’s only so much college scouting a fan can do. Most of us have jobs, loved ones, social lives and bowel movements to deal with on a daily basis. You can follow your alma mater and watch the big games, but that’s about it.

Speaking of Montana, the potential to not only become the first QB to lead two separate teams to a Super Bowl title, but cement his spot as the greatest QB of all time, was squashed by the Buffalo Bills in the 1993 AFC Championship game.

The Bills beat the Chiefs, 30-13, and Montana left the game in the 3rd quarter with a concussion.

Quote of the Week III

Hunt won't be alone. If it's anything other than a raging blizzard on Super Sunday 2014 -- when the game is played in northern New Jersey -- you'll have five owners knocking on Roger Goodell's luxury box, saying, "We're next!'': Pat Bowlen (Denver), Dan Snyder (Washington), Hunt, Jeff Lurie (Philadelphia), and hmmm, let me think -- well, Paul Allen (Seattle) won't knock on the door, but he will e-mail Goodell.

Rookie -- Don’t be surprised if Eric Berry makes a run at defensive rookie of the year. However, if there is a rookie gem, it’s Dexter McCluster. The all-purpose player will definitely get some looks all over the field, but he’ll probably make his biggest impact in the return game. If you’re in a league that rewards points in the return game, he’s worth looking into.

"Promoting the jerseys like this gives the players a chance to take off their helmets and tell a story," said John McMahon, marketing director for Reebok Sports Licensed Division. "It makes them relatable."

The campaign, running through September, will have a dedicated Web site with video footage of players like New York Giants quarterback Eli Manning and safety Kenny Phillips, Kansas City Chiefs running back Thomas Jones, and other stars talking about the origins of the numbers they wear. Fans can upload video clips about their favorite numbers (or the ones they wear during their own games) and enter a contest to win NFL swag.

Evocative and still full of life, Fred "The Hammer" Williamson has had three different entertainment lives. He began his career in pro football – where he received his nickname for his punishing style – and played mostly for the fledgling American Football League [AFL] with the Kansas City Chiefs. He also played in the first Super Bowl [1967].

His second career involved the movies, where he appeared in the classic Robert Altman film, "M*A*S*H" [1970] and black action films like "Hell Up in Harlem" and "Black Caesar" [both in 1973]. He has continued to work in films including the recent "Starsky & Hutch" remake [2004].

Over the years, my wife has accused me of being insensitive.

So I think what I’m saying is this insensitive business is a two-way street.

Mike Pound: It’s time for a ‘talk’ from The Joplin Globe

BCarr39 Day 2 of attempting to go to the water park. Hopefully minus the ☂ this time

almighty31 Pullin up to arby's bout to hav a little snack

berry1429 Waitin on my sis nita baby to figure out what we're doin today.

BCarr39 Somebody help me make a decision on some TVs. There are too many choices now-a-days!

GlennDorsey72 What's a good movie I can check out?

JarradPage44 Jus finished watchin the movie SALT. They had Angelina Jolie ass jump from about 3 different trucks on to 3 different freeways Lol #c'monman

HermEdwardsESPN It's his 3rd year, he needs to define his role & stay healthy . He was a Young jr comming out.RT @markster956: Is Dajuan Morgan a bust?

kentbabb Me, I'll be a little surprised if Morgan makes the team out of training camp. Only way he does is if Page is cut and no other FS emerges.

kentbabb For, ahem, Jarrad Page, I'd bet the Chiefs are looking for at least a fourth rounder (but would take a fifth). Just a guess, though.

HermEdwardsESPN CJ Siller/ E Berry/ R Mathews/ D BryantRT @da_legend_sy: which rookie do you think will have the biggest impact for his team?

HermEdwardsESPN Yes,if he can continue to play he did last year.RT @wheresmyNFL: sir what do you think of ss bernard pollard. Is he probowl caliber