The New Arrowhead Stadium had it's first test this evening with the Kansas City Wizards matchup beating of Manchester United. 52,424 folks came into the stadium for the first real sporting event at the Chiefs new digs.

Here are a few photos from my evening, including the first fly over at the New Arrowhead.

Things went off very smoothly. There were no major problems. I talked to a few fans who were impressed with the stadium and I've been following the reactions of folks via Twitter and everything is positive.

I spent my evening in one of their suites. Described in two words: Fancy pants.

It was awfully nice with plenty of amenities. I didn't catch the cost of it but I can tell you I had a great time there. I snapped a few photos of the cool Chiefs-related stuff in our suite and I'll detail that in a posting for tomorrow.

But here's a sneak peek of the suite life in the New Arrowhead: 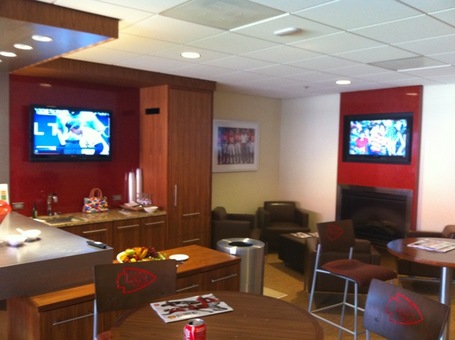