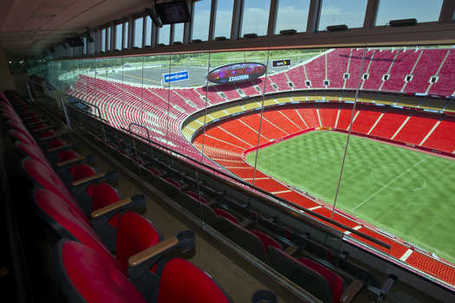 When you’ve won 10 games over the previous three seasons, as the Chiefs have done, it doesn’t take much to prompt the feeling the the worst is finally over.

The Chiefs think they’ve earned the right to feel that way. They point to a productive offseason that saw them rebuild coach Todd Haley’s staff of assistants, sign a 1,400-yard rusher in Thomas Jones and draft one of the top safety prospects to come out of college in many years, Eric Berry.

Haley dared give voice to that notion as far back as the NFL’s scouting combine in February. He didn’t back off last month when the Chiefs concluded their offseason practice.

As camp looms, Chiefs feeling more upbeat and focused than a year ago from KC Star

This week, the Chiefs will open training camp in for the first time since they left for , in 1991. Western State University and the city of St. Joseph are the new summer home for the Chiefs, who chipped in $10 million of the $13.45 million construction cost…

…Here is a look at where the Chiefs will be living and working for the next month.

Camping Out in St. Joe from KC Star

This is your chance to get on the record the big questions marks that need to be addressed with the 2010 Chiefs. Simply attach to this post your three biggest concerns as the team heads to St. Joe. Do that between now and Thursday when they arrive at Missouri Western.

We’ll total up the concerns and put together the top five question marks in the minds of the fans. Starting on Monday, August 2, we’ll address those concerns with a daily story highlighting one of those situations and what has gone down in camp to provide answers.

What Are Your Questions About The 2010 Chiefs? from Bob Gretz

Because of the wear-and-tear of a 16-game schedule — in addition to the different skills required in multiple offenses — most teams are doubling up in the backfield and splitting the workload between two and sometimes among three running backs...

...That’s why several teams fortified their backfields this season, starting with the Chiefs, who signed free agent Thomas Jones, the third-leading rusher in the NFL for the Jets with 1,402 yards. He’ll team with the league’s 11th-ranked rusher, Jamaal Charles, who ran for 1,120 yards in barely a half season last year.

NFL blitz: Teams are doubling up in the backfield from KC Star

When NFL teams head into training camp over the next week, they will have 38 coaches with ties to the Kansas City Chiefs.

From a head coach like Mike McCarthy in Green Bay, to San Francisco offensive coordinator Jimmy Raye (left), to assistant coaches at just about every position on the roster, more than three dozen men have worked inside Arrowhead Stadium and gone on to other NFL teams.

NFL Coaches With Ties To Chiefs from Bob Gretz

Colzie will remain with the Chiefs through their first preseason game against the Atlanta Falcons on Aug. 13 at the Georgia Dome, meaning he’ll miss West Georgia’s first week of preseason practice.
Colzie headed to Chiefs for NFL program from The Times-Georgian

Her death stunned many in the NFL who did not know she was that sick or that her cancer had advanced to a terminal stage. No details have been released on her passing and the family has asked for privacy. A private funeral service is set for Monday in North Carolina.

"Kaye was the rock that we could all lean on in the tough times," Bill Cowher said in his statement. "She was looked up to by so many people and I cannot say enough about what Kaye meant to our family. Her memory will never be forgotten. We would like to thank everyone who has kept our family in their thoughts and prayers and for those who have reached out to express their condolences. It is clear that Kaye touched a lot of lives."

gregaiello RT @JasonLaCanfora: Donations on Kaye's behalf can be made to Family Resources of Pennsylvania (412)-363-1702;  www.familyresourcesofpa.org