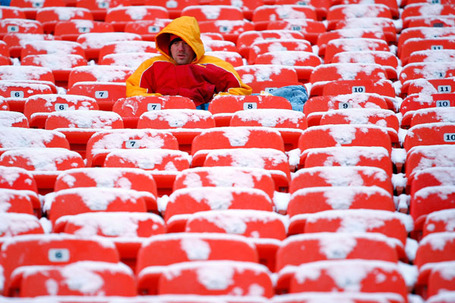 Wow! I hope you guys are having a slow day at work, because there are a ton of articles waiting below. Seriously. We've got a couple of write ups on our new coaches, more about Kennison, a couple of updates on Albert, and a lot more. Now get to reading!

The trio of Charlie Weis, Romeo Crennel and Steve Hoffman has coached in 13 Super Bowls and walked away with 12 championships. No other staff in the league comes close to matching those dozen titles among their coordinators.

What does that mean for the Chiefs? They have coaching staff leaders who have been there, done that at the highest level of the game. Discussion can be had on whether Weis and Crennel are products of the successful system of Bill Belichick. It’s the old chicken or egg question; were the Patriots so good because Belichick was the key decision maker, or did New England win because it had talented coaches on the staff like Weis and Crennel.

Last season, Hoffman led the most consistent and successful facet of the Chiefs game during the 2009 season. The kicking game had very few mistakes and developed a top kicking prospect in Ryan Succop.

No NFL team was interested in Eddie Kennison’s services, so there was only one thing for him to do. Kennison called an end Monday to his 13-season NFL career, even signing with the Chiefs so he could retire as part of the organization.

"It’s been one of those situations where you know it’s coming but you really don’t want it to end. I’m closing this chapter and looking forward to the next chapter in my career and in my life."

Receiver Kennison retires as a Chief from KC Star

Here's wishing Eddie Kennison signed with the Chiefs to play for them in 2010 instead of merely to retire as a member of the organization, as he did today.

Maybe this time around, Kennison would have received the credit he was due the first time, but never seemed to get.

Kennison was always underappreciated from The Red Zone

The Kansas City Chiefs are entering dangerous territory, as their multi-year rebuilding period has morphed into a culture of losing. They've won just 10 games over the past three seasons, they haven't averaged 20 points per game since 2006, and they haven't won a playoff game since 1993. These are lean times. During the offseason, the Chiefs hired new coordinators on both offense and defense, which should tell you — in the clearest possible terms — that everything is broken.

Well, OK, almost everything. There's clearly nothing wrong with Jamaal Charles(notes). (According to the fantasy expert's style guide, I'm supposed to insert a "Charles In Charge" joke here. Instead, let's just link to a picture of Willie Aames in aerobics attire and call it a day).

Juggernaut Index No. 24: The Kansas City Chiefs from Yahoo! Sports

There are two safe assumptions we can make about the 2010 Kansas City Chiefs:

1) They will run the ball well

2) They will struggle to stop the run

Neither of these statements are at all controversial.  We know Jamaal Charles can run behind this line because he did it last year...

...I know some of you don’t want to believe this, but our rush defense will probably be at least as bad as our rushing offense is good.  Again, we need look no further than last year for evidence of this.  The front seven couldn’t stop the run last year.  Given that these are the same guys, there’s no reason to think they’ll be able to this year, either.

While Running Game Is Certain, Passing Game Is Anything But from Arrowhead Addict

After being drafted with the 15th overall pick in 2008, Branden Albert played well as a rookie left tackle for the Kansas City Chiefs.

Last year, the former East High School student endured a rocky and inconsistent sophomore season, but he's ready to rebound. Albert delivered a message about perseverance and diligence Monday to a group at the Carlson MetroCenter YMCA at the Branden Albert's second annual Rochester Kids' Day.

"Just keep working hard," the former University of Virginia star said. "Don't let anybody tell you you can't do anything. I had a lot of people growing up who didn't think I was going to be anything."

Before heading to training camp for the Kansas City Chiefs, Rochester native Branden Albert stopped by the Rochester YMCA to talk with some local kids.

Albert was the Chiefs’ first round draft pick in 2008. He says reconnecting with kids is a priority. "Most of the kids at the YMCA today didn't even realize who was coming in for a visit today.

It wasn't that long ago that Albert was in their shoes -- this was his home away from home. "I did the day camp thing I came here to play basketball and worked her to give back to the YMCA. Having this annual day means a lot to me."

After the display that was ESPN’s The Decision, the conventional wisdom has it that Cleveland is the unluckiest, most cursed sports city in America. Certainly, this majority opinion is hard to disagree with in the wake of LeBron James’ prime time announcement (snub?) that he was going to Miami.

Still, I kept asking myself… Does Cleveland have it that bad?

To cast this question another way… Is Cleveland more cursed than my hometown of Kansas City?

Kansas City: Cursed in Sports? Part I from Upon Further Review

The new collaboration leverages the college coach connections of College Coaches Network and the training expertise of the 68 Inside Sports staff to train and prepare young athletes for collegiate competition and deliver higher quality athletes to college coaches across the nation.

Will Shields’ 68 Inside Sports and College Coaches Network Join to Create Better Athletes and College Exposure from PRWeb.com

For the people and businesses in St. Joseph, the culmination of many months of anticipation ends when the Chiefs arrive in town to bring their training camp home to Missouri Western University.

Beth Conway, communications director for the St. Joseph Convention and Visitors Bureau, said excitement is running throughout the city. Training camp in St. Joseph runs from July 29 through Aug. 19.

"We're pumped," Conway said. "Everyone is talking about it."

This year marks the first year the Chiefs won't be in River Falls, Wis., and many in St. Joe are thankful the Chiefs will bring their brigade of players, coaches and staff, along with thousands of fans, much closer to the Chiefs home base. Conway said she and many of those in town aren't quite sure what to expect from the Chiefs visit.

Professional sports teams are so transient, and the athletes so uninformed about their team’s history that rivalries have diminished across the board. Besides, the young jocks don’t have a connection to the community nor live there year round. It’s more about their posses and their own selfish lives.

Who are the Denver Broncos’ rivals? ’s dead. It was the Kansas City Chiefs for a while, but not really. Most Broncos fans would now say it’s the San Diego Chargers, but the Chargers fans would say, "Not so much."

Eric Berry, S, Kansas City Chiefs: A hard-hitting ball hawk with a knack for being in the right place at the right time, Berry should record enough tackles and interceptions to become a legitimate IDP starter in 2010. The 2009 Jim Thorpe Award winner amassed 14 interceptions and three touchdowns in three years at Tennessee.

5 rookies to watch in 2010 from The National Football Post

Team chemistry has been on my mind a lot as I pondered some strange recent happenings in the AFC West. It started in early 2009 when new Chiefs GM Scott Pioli announced his philosophy of "The Right 53" and how he was going to build the team: "It’s not necessarily the best 53 players - it’s the right 53 players". Not the most talented, not the best, not the most exciting - just the 'right' ones. I wonder how they measure 'rightness', or would that be 'righteousness'?

Now, I'm no expert on the Chiefs, and in ways that escape me somewhat, theirs may be a sound strategy. But I've got to wonder how much the strategy was influenced by the then soon-to-be-hired Chiefs Head Coach Todd Haley and his experience with T.O. in Dallas. Kansas City is the only team the currently employment-seeking T.O. has categorically ruled out so far: "Me and Todd Haley, we don't get along," Owens said of Haley, who was T.O's WR coach in Dallas in 2006.

Measuring the Immeasurable: Team Chemistry from Blogging the Boys

Undaunted, Valero called back and asked Smith to give him 30 minutes of his time.

"I met with him at 6 o’clock in the morning, and by 3 o’clock that afternoon I had the job," Valero said. "And I was with him for 12 years after that."

It was an association that took Valero from Idaho to Utah State (1995-97) and then Louisville (1998-2001). During all this, Valero did have an eye on the NFL, not to mention a foot in the door. He served minority fellowships at training camps with the Kansas City Chiefs (1994), where he worked with coach Marty Schottenheimer and Gibbs; the Buffalo Bills (1996), when Marv Levy was the coach; and the New York Jets (1998), when they were coached by Bill Parcells.

"All I did was take notes," Valero said of those summer-school sessions with Schottenheimer, Levy and Parcells. "I’m one of those people who approached it as, A, I’m a free agent; and, B, I’m going to be very, very slow to speak and very quick to listen.

"The coaches who were on those staffs have no idea how much they’ve helped me – personally and professionally."

The Art of uniqueness from Seattle Seahawks.com

WTF, you say? Maybe I’m still having an unnatural man-crush on this guy from the Cotton Bowl. That was one of the best single game bowl performances I’ve ever seen, right up with Bo Jackson’s 1985 Cotton Bowl. Once he got in the open field, he was insanely fast and elusive.

I kept having visions of a stronger Percy Harvin out there–on a worse team, but with better skills, hence over looked. Walking out of Jerry World, he was already my 2010 Sleeper target.

Kansas City sure didn’t overlook him either, taking him in the second round and hoping for some Parvin-esque joojoo. McCluster doesn’t have a defined position with the Chiefs, and that’s a good thing. He’ll likely line up at wideout, slot, running back, wildcat, and return man during the 2010 season. If not the next Percy Harvin, perhaps the next Josh Cribbs?

Weis and Crennel have come full circle from their salad days with the Patriots in the early 2000s. They enjoyed some initial success as their own big cheeses (Crennel led the Browns to a 10-6 season and Weis went 9-2 out of the gate at Notre Dame) and both parlayed quick starts to big contracts.

It eventually went sour and now both at back at what they do best. It was a mild surprise that they are both not back at New England, but a little Bill Belichick goes a long way and former front office boss Scott Pioli brought them to Kansas City.

NFL Top 5: Coordinator hires you should know about from Covers.com