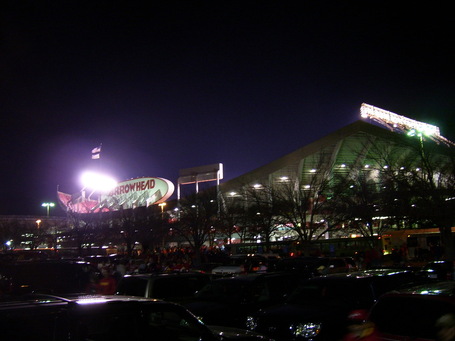 Welcome to another week. Your Kansas City Chiefs news waits below. Not too much today. Enjoy.

Haley is a workaholic, which is really just another way of saying he’s an NFL head coach. When he has a minute in his life to think about things other than football, his time and thoughts are dominated by a wife and five children. Haley puts in the same type of hours that Marty Schottenheimer did, and Gunther Cunningham, Dick Vermeil and Herm Edwards. Some 10 days from now when the Chiefs caravan heads to St. Joseph and Missouri Western State University for the start of training camp, his clubs will go back in the garage and won’t be touched again until probably next June.

That’s life as an NFL head coach, not a professional golfer.

He may just be the best all-around athlete in TCU history.

That's not hyperbole, and neither is the claim that Mickey McCarty has been a medical miracle for 24 years.

"I've had two lives, if you want to break it down that way," McCarty said from his League City home, just south of Houston. "An athletic life and a medically experimental life..."

...Let me provide a snapshot of Robert Mickey McCarty:

Great athlete, 6-foot-7, 250 pounds, drafted out of TCU by four professional sports leagues -- NBA, ABA, MLB and NFL -- and signed by the Kansas City Chiefs to play a sport he hadn't played since high school.

At 35, he suffered a stroke that paralyzed his left side, so he taught himself to be right-handed...

..."My plan was to sign with the Chiefs [$20,000 bonus], take a couple of beatings, then get cut and go play baseball," said McCarty, who was a fourth-round draft pick despite not having played football at TCU.

Future Hall of Fame quarterback Len Dawson approached him on the way to the training table, and asked young McCarty, "Do you want to make the football team?"

The Lions decided last month not to pursue free agent O.J. Atogwe, but they won't rule out making another move. Among the players who might be of interest is Kansas City's Jarrad Page, who has requested a trade and refused to sign his restricted free agent offer from the Chiefs.

"I think we're gonna keep looking at that position as well as every other to try to get better," Mayhew said

C.C. Brown starting his career over with Lions from The Detroit News

What was your year like with the Cowboys in 2008?

"It was great to come back. I made a lot of friendships and they have a lot of good guys who I root for. The only thing that was uncomfortable for me was changing positions. When you do something for 12 years with the Dolphins playing right in the middle at linebacker that's what you know. Dallas had Brady James there in the middle and didn't need another middle linebacker. I wanted to come home to Texas and try to adapt and make it work. That team was stacked, but we didn't make the playoffs. (Tony) Romo got hurt. So many things came into play. I don't regret anything. It was fun while it lasted. The only reason I left to go to Kansas City was to play a position I had been playing since the third grade."