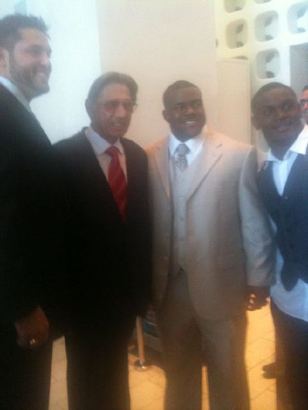 The life of a NFL player.

You just win a national championship. You're drafted to the league. Several months in and it looks like you're the starting nickelback. The coaches only have good things to say about you.

It doesn't stop there for Chiefs rookie Javier Arenas, the club's second round pick.

Arenas, along with Mark Ingram, Mike Johnson and other Alabama players, attended the ESPYs on Wednesday evening to represent his school for a number of awards they were up for including best team, best coach and male college athlete of the year.

While at the ESPYs, he takes a photo with Joe Namath.

Ever heard of him?

Since Namath went to Alabama, I gotta assume this isn't the first time Arenas has met him. So it's possible he's buds with Namath. Joe Namath!