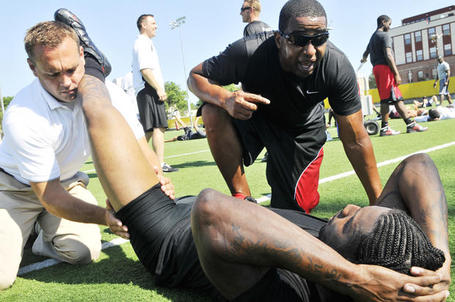 Dwayne Bowe and the Kansas City Chiefs were 4-and-12 in 2009, their third straight losing season. But with the help of some big time offseason acquisitions and a better feel for his teammates, Bowe thinks KC is ready to return to relevance...

That championship experience, along with the additions of former Jets Pro Bowler Thomas Jones and first round draft pick Eric Berry, has Bowe feeling very good about his team.

"I've definitely got my fingers crossed for the playoffs." Bowe said.

Bowe: 10 Wins And Playoffs For Kansas City from Keloland.com

My condolences go out to Yankee fans. It’s only right.

I know what they’re going through...

...When Lamar Hunt passed away in December 2006, the thing I remember most about the event was the sheer emptiness that I felt upon hearing the TV reports. I just couldn’t help it, like a lot of Kansas Citians couldn’t either. Mr. Hunt’s outstanding body of work made us feel that way. With all the time, effort, money and emotions that we as fans invest on our favorite teams, we just cannot feel but attached to these people.

Fantasy tip: You should feel comfortable taking Succop as your No. 1. Owners are typically drafting him as the 14th kicker off the board. If you want to secure your defense in the final two rounds, do that, then take Succop in the last round. We like him as a sleeper this year.

Fantasy tip: Jones, typically an eighth-round selection, passes as a No. 3 back but could post No. 2 numbers in standard scoring via his end zone nose. TJ is optimally drafted as a No. 4, though, and shouldn't trump options with less baggage strictly because of his '09 stats, which came in a carrier's utopia. The Chiefs can't prop up an aging back, especially with another talented - and younger - back. Jones' potentially touchdown-centered value could frustrate fantasy owners, a la LaDainian Tomlinson, 2009.

An NFL player and three state-trophy winning boys basketball teams are part of the 2010 class of the Canton High School Hall of Fame.

A total of five individuals and four teams will be enshrined July 31.

Grigsby, a 2000 Canton graduate, became the most decorated football player in the history of Illinois State University. He was a three-time national finalist for defensive player of the year at the NCAA Division I-AA level and was chosen in the 2005 NFL draft by the Chiefs.

If the opinion of some of the best receivers to play the game of football has any merit, then former Gophers receiver Eric Decker should have a bright future in the NFL...

Fitzgerald's camp draws NFL pros to U from MNDaily.com

Kansas City Chiefs: Business writer Jim Collins authored a book called "Good to Great", which is how Kansas City must think this year. The Chiefs need to find their identity and get back to fundamentals and execution. Schemes can't be changed each week as was the case last year. Hiring former Patriots coordinators Charlie Weis and Romeo Crennel will help, but they won't be able to overcome the lack of talent on both sides of the ball. The Chiefs drop too many passes on offense, and cannot win in short yardage. On defense, they are painfully slow and have little or no pass rush. The Chiefs continue to be a work in progress and might be able to beat a playoff team from time to time, but won't be consistent enough to make a postseason run.

Washington Redskins, Kansas City Chiefs, Dallas Cowboys, San Diego Chargers, New York Jets, Baltimore Ravens, Denver Broncos. The Texans will play all these teams this season. Challenging as that slate looks, it actually contains two of the easier games of the Texans season in my opinion: the Chiefs and the Redskins. But all seven of these teams carry with them a trump card against Houston.

They run the 3-4 defense, the new fad of the NFL that has tiny offensive linemen looking into the eyes of 360 pounders and brings confusion to quarterbacks by better disguising the intentions of the linebackers. There is no sugarcoating Gary Kubiak's career record as an NFL coach against this scheme: he's 6-9 against 3-4 defenses, with an astonishingly bad -148 point differential in those games. However, the caveat is that over the past two years, Kubiak has gone 5-4 against these teams. Has he improved significantly, or was this statistical noise?

Mythbusters: Gary Kubiak Versus The 3-4 Defense from SB Nation Houston

Derrick Thomas was one of those laid-back, cool cats...unless he was on the field, that is. Then you were screwed!

In the first round of the 1989 draft, the Kansas City Chiefs selected fourth, and they selected wisely.

Thomas broke several records while attending the University of Alabama, including the single-season sack record of 27, which still stands untouched.

"From the University of Alabama..." The Five Greatest NFL Athletes from Bleacher Report

Kansas City made moves that will improve their offense by keeping receiver Chris Chambers and signing running back Thomas Jones while improving the defense through the draft with safety Eric Berry and Javier Arenas. While the Chiefs are noticeably improved, it's questionable if they'll be ready for a playoff run.

Don't Sleep on the Raiders from The Washington Post

VYPE High School Sports Conference and Expo today announced that former NFL Cornerback and Triangle native Dewayne Washington will provide the opening keynote for the upcoming event on August 21st at 10am. Washington was a high school All-American at Northern Durham and an All-ACC performer during his senior year as co-captain of the N.C. State football team.

Washington was selected in the first round of the 1994 NFL Draft by the Minnesota Vikings with the 18th pick. During his 12-year professional career, he played for the Minnesota Vikings, Jacksonville Jaguars, Kansas City Chiefs and Pittsburgh Steelers where he was twice named Man of the Year. Washington played 10 straight seasons without missing a regular season game and played a total of 191/192 possible regular season games for his professional career.