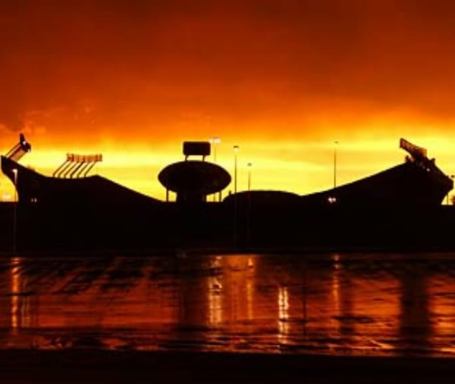 Thanks to a QB controversy, a youth movement, a decline in performance or even a discrepancy in value throughout the years, similar instances have arisen in Chiefs history. Other squads conquered new heights by reaping the benefits of the efforts of Lamar Hunt’s franchise. And even though we can always rationalize that different circumstances acted in every case – the price was not worth it or it just wasn’t meant to be – the fact remains that while the people that left the Red and Gold colors indeed enjoyed progress, the Chiefs, as a whole, stood still. It prompts us to always think about what might have been. And clearly, that’s the phase that they’re about to begin in Ohio.

Kansas City Chiefs running back Thomas Jones served as the keynote speaker. Jones, a Big Stone Gap, Va., native, was one of seven children raised in a coal mining family. His father, two grandfathers and mother were all coal miners...

..."I am a coal miner’s son. I’ve been proud of that my whole life," he said. "...My recipe for success has always been hard work. Some people think that’s clichéd, but it goes back to coal mining."

His NFL career has had its low moments, such as being released, Jones said. But he said he cannot complain after seeing his "courageous" family members work in underground coal mines...

...Jones said speaking at Sunday’s event was a "blessing and an honor" and that he felt like he was at home. He told family members he has followed their stories and admires the strength they have shown.

The 2010 NFL season is fast approaching, and perhaps no group of fans in the NFL have as much cautious optimism about what it will bring as the fans in Kansas City...

...Here are the 10 things to keep an eye on when training camp begins for the Chiefs, 45 minutes north of Kansas City in St. Joseph, MO on July 30th.

Kansas City will make progress in 2010 but with a new offensive coordinator and a complete realignment of the defense as well, Kansas City is definitely in the midst of a rebuilding year. The Las Vegas Hilton Superbook has placed the Over/Under win total for Kansas City at 6.5 wins. Kansas City should be able to win six to seven games in the 2010 NFL season in a rebuilding year.

It’s generally assumed since Stan Rome was a two-sport letterman at Clemson that his son, Jay Rome, is most likely to end up there.

Not so, says the man that should know best, Stan Rome.

..."The intensity of recruiting is no different today but things were a whole lot different back at that time," said Stan, who played for four years in the NFL with the Kansas City Chiefs. "Now they have a lot of NCAA rules and do’s and don’ts that didn’t exist back in that day. And back then the schools in the South were just integrating African-American students. So it was a situation where no one in my family had ever graduated from college. . . .

As time keeps ticking toward the start of NFL training camps to begin, David Olson continues to wait.

The former Rochester Community and Technical College linebacker was one of 80 players, and only eight linebackers, to go through an NFL tryout in the middle of June in Indianapolis...

...Olson has also sent out film to all 32 NFL teams. He said he has had the most interest from the Vikings, Dallas Cowboys and Kansas City Chiefs.

The future of testing for human growth hormone is shaping up to be a contentious issue in negotiations between the NFL and the players' union, with the league supporting blood-based testing and the union less convinced about its validity.

Hats off to former FAU running back Anthony Jackson, who was part of the staff of Prep and Sports, who pulled off another successful clinic and 7-on-7 tournament for their organization Saturday.
It doesn’t hurt when Kansas City Chiefs defensive back Brandon Flowers, a driving force at Prep and Sports, and Indianapolis Colts receiver Pierre Garcon are in attendance to talk to kids about what they need to do to succeed. Following their talk, 16 teams from around the area square off in a 7-on-7 tournament.
Sunday’s FAU Daily Briefing: Former Owl helps with successful camp from FAU Owl Access