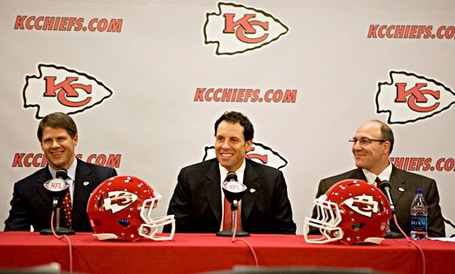 We first noticed this trend last year. In the offseason, the approval ratings for the Chiefs brass skyrocket.

Look at Todd Haley for example. Last December, he was at a 48% approval rating. By the next month, a few days after the Chiefs had beaten the Broncos to end the season, Haley was at 79%. And now he will finish at 92% for this month.

If our first year of approval ratings is any indication, all three will reach their peak in August 2009 and bottom out from October-December. It'll be interesting to see how the ratings look if the Chiefs start off winning.