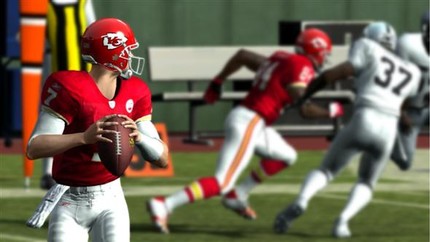 Good morning, AP. Thin news day. In addition to the Kansas City Chiefs news here, there is an article on Tom Condon (agent and former Chief) on the Indianapolis Star's website, but it keeps frezing up on me. Not sure if it's my computer, or the site. After watching the EA video preview of the AFC West, I have to wonder if they are right about our strength. Bill Williamson seems to disagree with EA. What do you guys think?

We've got the preview video and screenshots from EA Sports starring the Denver Broncos, Kansas City Chiefs, Oakland Raiders, and San Diego Chargers below along with team ratings.

Will from Lenexa, Kan., wants to know if I think the Chiefs' offense will be a pass-first or a run-first outfit.

Bill Williamson: I think it will be a run-first offense. But you have to be balanced to win in the NFL, so Matt Cassel will get plenty of chances to toss the ball. But the Chiefs brought in Thomas Jones through free agency to help Jamaal Charles because they want to run often. The Chiefs want to dominate games on the ground since great offenses have great run attacks. The run sets up the pass in efficient offenses. That’s what the Chiefs are aiming for.

Mailbag: Will Chiefs run or pass first? from ESPN

The New Arrowhead Stadium will debut at the end of August when the Chiefs host Philadelphia in a pre-season game.

Remaining within the stadium shell are memories of the hundreds of games that have been played there since the summer of 1972.

This article is pretty dense, but it does give a Niners view of our team.

When we arrive at week three, we face a crippled Kansas City Chiefs who are right in the middle of having a string of bad seasons. The Chiefs will get pummeled in every aspect and this will help the 49ers gain even more confidence going down the road. Michael Crabtree will snatch at least two scores in this one and it will resemble a Madden Video Game when it is all said and done for this one. Final Score- 42-3, Niners.

It’s all sunny and perfect for Darrell Stuckey.

The former Kansas safety lives in San Diego. About four times a week after practice, he sees a movie.

...The San Diego Chargers play the Kansas City Chiefs on Monday Night Football September 13, at Arrowhead Stadium’s season opener. To play in his hometown the first game of the season in that atmosphere, he said, is like a gift from God.

"This is what you wanted to become," Stuckey said. "And all you can do is cherish it and not take it for granted."

As many of you Kansas Citians know, President Barack Obama was in town this week. While at a speaking event, he had Oklahoma Joe's catered in.

The only thing more likely than politics to cause an argument in Kansas City is talk of the best barbecue.

I'm happy to report that Obama got it right this time. He chose OK Joe's, which is the best barbecue in the city (Cue 20 comments telling me I'm wrong).

BCarr39 Florida got some athletes!!!

GlennDorsey72 Goodmorning I have a weeding and my charity event on to do list today. Gonna be a long one!!!! Oh well #leggo

almighty31 I just found @HermEdwardsESPN on twitter. Follow him. He made a big difference in my life and I thank him for that.

GlennDorsey72 RT @CarlsonSwede: @GlennDorsey72 what kind of charity? A local version of dancing with the stars raising money for kids with disabilities...

JarradPage44 On my way to help out at my boy @thehawk38's youth football camp. About an hour and a half late #noalarmset. L!!!! U know J Page luv da kids

JarradPage44 Jus left the camp. Gotta love da kids but they DO NOT listen to intructions. Especially the young ones. Lol but (cont) http://tl.gd/2e9idt

BCarr39 Thinkin I'm goin to have a mini workout on the beach in the morn.

WhitlockJason Palin Nation. I cant make this stuff up RT @timyeah: I find it funny u r talking bad about ESPN, yet I see u on network every sunday morning