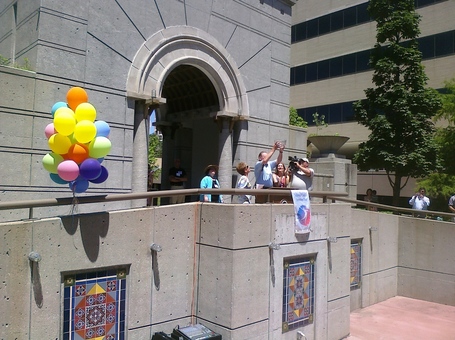 As I said earlier, I attended the 25th annual Kansas City Celebration of Life Rally at the Bloch Cancer Survivors Park here in Kansas City this afternoon.

The guest of honor was Len Dawson.

I've got a few more notes and pictures from the event including a visit from a couple of Chiefs players.

At the event, several local newscasters spoke beginning with Larry Moore of KMBC 9 News. Get this: Moore and Dawson have worked together since 1968. Amazing, isn't it? Moore is a cancer survivor himself. He described some grueling times he went through in the early 90s.

Annette Bloch -- wife of the late Richard Bloch -- spoke for a few minutes as well. There was one funny Chiefs-related moment. She told a story about her and a friend in 1969. Apparently, while at a party, she and a friend made an agreement that they would quit smoking if the Chiefs won the Super Bowl.

"And they won," she said this afternoon. "But that was the only one they won!" she said to laughter in the crowd.

(Side note: Richard Bloch was diagnosed with terminal lung cancer in 1978 being told he only had months to live. He died in 2004. If you're from Kansas City (or anywhere else, really) you're probably aware of the tremendous impact he's had on the community in his efforts to fight cancer.)

Gary Lezak -- an 11-year cancer survivor -- began asking folks in the crowd how long they had been cancer survivors. He started off at one year, then two years, then five, 10, 15 and so on. 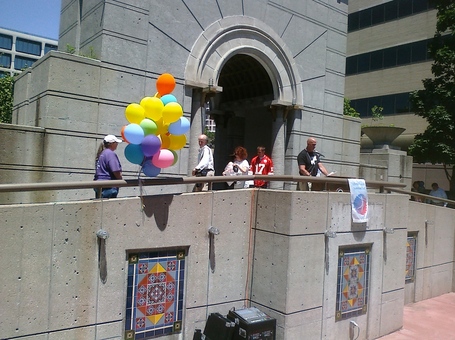 That is until he ended at a man who happened to be standing right next to me. 39 year survivor. The longest in the crowd. That accomplishment deserved some sort of award. And that award was delivered by none other than Chiefs WR Lance Long. 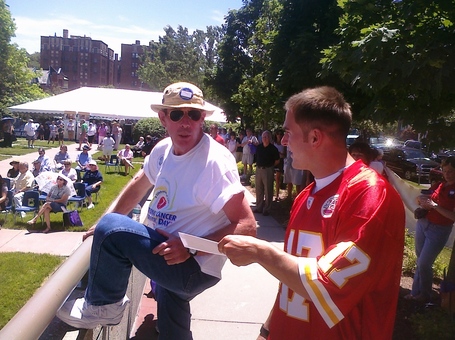 Joining Lance Long at the event was Tyler Palko, Chiefs backup quarterback. There was a raffle and Long and Palko were the two who were handing out the prizes to the winners. They were also signing some autographs as well.

After all the speakers were done, it was time for Lenny to speak. Here's his entire speech:

I came back from broadcasting a football game on a Sunday and she said, 'You know Senator Dole don't you?' I said, 'Yes,' and she said, 'Well read about him. He had an operation to remove his prostate gland.' He had all the symptoms for prostate cancer. I read it and said, 'Well, I'm glad that he's doing well. I hope he survives. He's doing a great job.'

Also on the newspaper, there's something there that says 'All men 50 years of age and older, if you haven't had this new blood test on the PSA, you should have it. It's free. You just have to make an appointment.'

Well, my wife made an appointment. And I explained to her, 'I'm busy and all this and that.' She said, 'Well, listen if you're not going to go then you call these people and tell them you're not going.'

I couldn't win that battle, ladies and gentleman, I knew that. Thank goodness for her because it saved my life, I think.

When I went to the doctor I thought he was going to take some blood and I'm gone. Well they took blood, and then the nurse said, 'If you step into this room, we can complete your examination.' Well I had an idea of what that was all about and I was not looking forward to it.

But thank goodness it happened because it was through the rectal examination that the doctor felt something was not right. He advised getting ultra sonic images and a biopsy. The long story is that the results came back and I did have cancer and it was malignant. I can assure you if she hadn't made that appointment, I wouldn't have gone because I felt fine and had none of the symptoms in the newspaper.

My advice is if there's somebody out there you care about, whether it be a relative or a friend, and they haven't had the examination, make them do it because it might save that person's life as well.

25 years of this organization going on. People, I know how hard the volunteers work. They do a wonderful job. I just want to say thank you to my wife and thank you to the people that are so concerned about this situation. I've traveled all over the country talking about prostate cancer. People are getting involved. People are now talking about cures and eliminating it. They're not just saying how to survive it. We're going to lick and it's going to happen. It can happen through the efforts of people like you.

Thank you very much. This is a great, great honor for Len Dawson and his family.