From the FanPosts. Bumped up the time to now. -Joel

The debate rages on. Fan A: You just don't understand the 3-4! If you don't have a NT the size of Montanna (the state, not Joe Montana) you simply cannot stop the run and you will get killed. Fan B: Not true! The days of the sluggo looking NTs in the NFL are passing us by (see Albert Haynesworth's recent complaint about having to be that guy). They are being replaced by smaller, more athletic blocking sleds that can give up some ground and still make a tackle or they can run loops and stunts and put fear into an opposing offensive line because they don't know what is coming next.

A bit of scrutiny applied to 3-4 defenses and how they have evolved over the last four decades in the NFL seems to indicate that a change is indeed taking place. Great football schemes mutate constantly in the NFL. The basic 3-4 scheme is classic. It will always endure. Like everything else, however, it has it's strengths and weaknesses. There is always somebody coming down the pike that has "a better idea" to add.

After the jump, I will include some prognosticating about the Chiefs shiny new 3-4 defense and where it fits in the grander scheme of defensive evolution in the NFL.

Trust me when I tell you that I am not a defensive guru. But believe me when I tell you that the two most exciting plays in a football game (for me) are the long runs or catches for scores (the more acrobatic the better), and the bone crunching, earth shattering, concussion generating hits that defensive players make. We've all seen the highlight reels and heard Tom Jackson's voice saying, "That's how Thomas Jones got JACKED UP!".

Actually Tom Jackson was part of a very successful 3-4 defense known as the "Orange Crush". Chiefs fans should be well aware of this defense, but it was a long time ago so a review couldn't hurt. 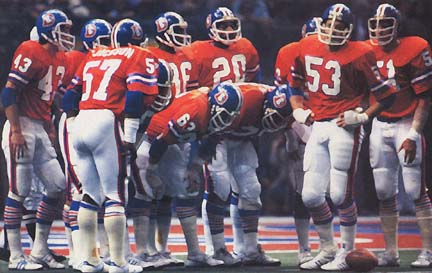 Orange Crush Defense was the 3-4 defense of the Denver Broncos during the 1970s.

It was one of the top defenses of its time with linebackers Randy Gradishar and Tom Jackson, with Gradishar as a potential Hall of Famer. Other key Crushers were defensive linemen Barney Chavous, Lyle Alzado, and Rubin Carter, linebackers Bob Swenson and Joe Rizzo, and defensive backs Billy Thompson and Louis Wright.

During the time that Red Miller was coaching this team, another familiar name was also involved during the 1978 season. That was the year that Bill Belechick was the assisstant special teams coach and the defensive assistant. This was his first exposure to the 3-4 defense and he has obviously been a proponent of it ever since.

The Orange Crush was wildly popular, and being named after a well known soft drink probably didn't hurt either. When it came time to solidify it's place in NFL history though, it could not overcome. They lost in Super Bowl XII to the Dallas Cowboys. Why? I think the answer is this:

In their Super Bowl XII season in 1977, The Crush had the NFL's number-one defense against the rush though the Broncos were 27th out of 28 teams against the pass.

This lack of ability to stop the pass would haunt other 3-4 defenses going forward. It even hung around the neck of one of Marty's teams.

Moving into 1980 you find another example of this same kind of 3-4, bend but don't break defense. This time it would be with the Cleveland Browns, their head coach Sam Rutigliano and their DC, a guy that a few people in KC have heard of--Marty Schottenheimer. 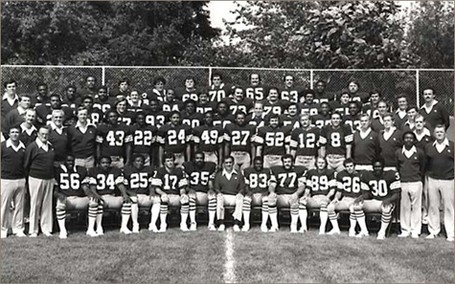 If you have been reading my posts you will remember one I did about the 1980 Kardiac Kids and how they might be a peek into the future of the 2010 Chiefs. Basically, that defense was the epitome of the "keep me in the game until the end so we have a chance to win" theory. Twelve of their sixteen regular season games were decided by seven points or less and ten were still in doubt in the final two minutes of regulation.

What is the comparison of this defense to the Orange Crush? Lack of ability against the pass. The Browns were much better against the run than the pass. They were sixth against the run giving up just over 110 yards per game on the ground but dead last against the pass, giving up an average of over 241 yards in the air. Is there a pattern developing here concerning teams not being able to finish big games because of a lack of stopping the pass? Does anybody of relevance in the NFL notice this?

Let's follow Marty for a few years here. He took over in '84 as HC of the Browns and then in '89 as HC of the Chiefs. Marty basically had so much success with this defense that he continue to tinker with it for years. Over that fourteen year period, Marty amassed a combined record of 145-85-1 (.627 winning percent). During that time he had eleven play off appearances, 6 division titles and three times was in the AFC Championship game.

How can it be that this awesome coach never made it into a super bowl game? Here are Marty's rankings:

Based on this information, I think Marty GOT it. In a fourteen year period he reversed the trend for what had been the biggest detriment to the classic 3-4 defense. His average for that time period is nearly a top ten finish in BOTH categories. Now, during that time I don't know if it is fair to characterize those defenses as classic 3-4 because many players came and went and alot of different things were tried, but I believe that Marty knew that to win it all you simply must be effective against the pass as well as the run.

Two times during this span, Marty fielded a top ten defense against both the run and the pass and not surprisingly both of those seasons ended in Divisional Championships. Unfortunately, both seasons also ended in playoff losses. Even so, I think that Marty was a part of the evolution of the 3-4.

While all this Marty stuff was transpiring, something else pretty exciting was going on with the old 3-4 defense. A guy by the name of Dick Lebeau was adding his own 'better idea' in Cincinnati. It ultimately came to fruition in Blitzberg.

Lebeau's history is way too long to include in this post. Suffice it to say that the man started playing in the NFL in 1959 and he is still coaching it today. That, in itself, should make him a hall of famer. At least you can't argue with the fact that he knows a little about defense.

In 1984 he was promoted to the Bengals DC after having been their secondary coach since 1981. From then until 1998 he ran what has become known as the "Fire Zone" or "Zone Blitz" defense. He bounced back and forth between Cincinnatti and Pittsburg having very good success with this scheme of the 3-4.

As an assistant coach he is credited with inventing the "Fire Zone" or "zone blitz" defense, which employs unpredictable pass rushes and pass coverage from various players. His defenses typically employ 3-4 sets, with any of the 4 linebackers and frequently a defensive back among the pass rushers, while defensive linemen may drop back into short pass coverage zones to compensate for the pass rush coming from other positions. The design is intended to confuse the opposition's quarterback and frustrate its blocking schemes, as the offense may be unsure on each play of which defenders will rush the passer and which will drop into coverage. While often described as a "blitzing" scheme (implying more than the typical number of four pass rushers used by most defenses), the call on any particular "zone blitz" play may involve only three or four pass rushers but from unpredictable positions and angles

Defensive linemen drop back in short pass coverage zones? Horror of Horrors! I don't think that too many 330+lb guys are going to be covering any 200lb WRs for more than about a blink! Herein lies the issue with those on the chunky side that want to play DE. You still have to be able to run to be effective in this scheme.

Kinda interesting when you listen to Jerheme Urban talking about a Haley summer camp where running is as much a part of the overall practice as scrimmage is. Todd Haley has had many opportunities to be exposed to Dick Lebeau. How much (if any) has Lebeau influenced Todd's thinking on defense? We won't know that for a while, but it sure will be fun watching what happens.

Without a mountain of a NT on our D Line this year, could we see some of this kind of defense? Possible. For those of you that think DJ is under utilized, and Hali is on the verge of being very good, this could spice up an otherwise ordinary 3-4 defense. Throw in Arenas and Berry and you suddenly are looking at Tropical Fruit flavored kool aid. You are never sure what fruit you are tasting, you just know it's GOOD.

Finally, we must turn to the DC who is actually running the show in KC. Romeo, Romeo what kind of {)*(Y&+_*()$Y {%JPO*YRP(FGYH defense are you planning on running Romeo? 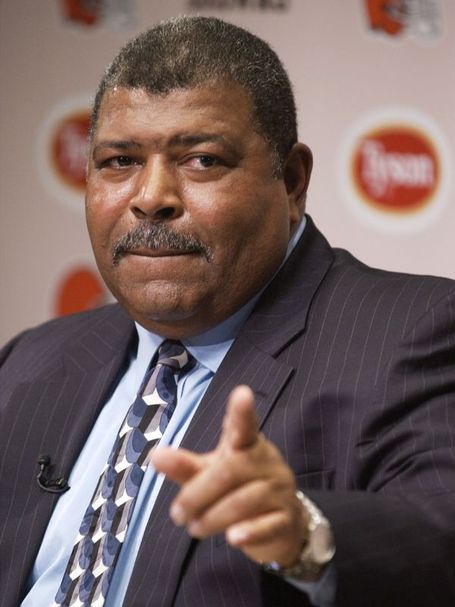 The '01-'04 Patriots Defense was more of the classic style than any mutation, but with less emphasis on any one player. Indeed, the emphasis was on the TEAM and not the ME (God help TO when he reads this). The difference between that defense and it's predecessors was that it won Super Bowls. So has the Dick Lebeau "Fire Zone".

Romeo had the advantage of some very good linebackers and some very athletic linemen. He has shown the ability to use what he has. Wasn't it "Dandy" Don Meridith that used to say, "Dance with the one that brung ya"? Romeo seems to accept the validity of that. If you add that to the fact that the recent draft has gone down in a very similar fashion to the one that happened in the 2001 version of the Patriots (in terms of areas addressed), well maybe the ingredients for success have just been ordered. All Romeo has to do is bake the cake.

It has been six years now since Romeo won that last Super Bowl. He ran off to Cleveland and tried wearing the big hat for awhile. It didn't work out well. He went from riches to rags. Last time things went swimmingly for him was when he just did the best he could with what Belechick and Pioli handed him. Then he went off and left the cake out in the rain...

Now it's Haley and Pioli and the uniforms are red and white with Arroheads on the sides. The "Sweet Green Icing" is the gridiron. Will Romeo ever have that recipe again? I don't know about everyone else, but if he does, I think it's a pretty strong argument for the fact that the 'classic' 3-4 defense has been one-upped. The secondary is the most important? I can hear all the Giant Nose Tackle afficianados out there right now--"This guy is full of ____". Maybe. Then again, it has happened before.

***For those who don't remember Donna Summer you missed one of the sexiest singers in Disco history. Arrowhead may not be MacArthurs park, but if Donna was there, I wouldn't know the difference. Maybe we could get her to sing at half time of the Super Bowl?