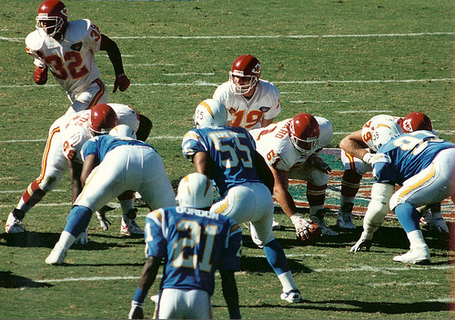 Good morning! This should be the last tweet-free post for a bit. I finally get to stay home for awhile. Today's Kansas City Chiefs news includes a warning about big name free agents (though the picture above reminds you that they sometimes work out) and some updates on player's offseason activities. Enjoy.

...There has always been one caveat with free agency, actually it’s caveat emptor, Latin for buyer beware. The Chiefs have become part of the majority of NFL teams that have learned that big free agency money should go to keeping their own players, rather than importing high priced talent from elsewhere.

There are those around the NFL who say that the Kansas City Chiefs are running a halfway house for aging stars on their way down. But the evidence at K.C.'s Arrowhead Stadium last Saturday afternoon was all to the contrary. Three players older than dirt—37-year-old quarterback Joe Montana, 33-year-old running back Marcus Allen and 36-year-old kicker Nick Lowery, a triumvirate with a combined 41 years in the NFL and 15 Pro Bowl selections—were as young as hope in fashioning a stirring 27-24 wildcard victory over the Pittsburgh Steelers in overtime.

Youth, of course, will be served. Later. In the meantime, the Chiefs' senior citizens are showing why experience counts.

A Trio Of Chiefs For The Ages from Sports Illustrated

Here is the 2nd part of my interview with former Kansas City Chiefs offensive lineman Kyle Turley. This is probably the juiciest of the 3 part interview.

Kyle was with the Chiefs at an interesting time. He was there for the team’s last playoff appearance as well as for the 4-12 season that followed. Kyle has some interesting things to say about Herm Edwards and Carl Peterson and he provides a insight in to what got the Chiefs in to their current state of suckdom.

I would love to hear your thoughts in the comments.

The Pope is coming back to Southwest Georgia.

No, not the one from the Vatican. The tight end for the Kansas City Chiefs.

Leonard Pope, a four-year NFL veteran and former University of Georgia star, will be in Americus Saturday, promoting the fight against childhood obesity with his annual "Kids Day" event in his hometown, featuring a "Fitness Walk," football drills, lunch and talks from NFL players about staying in shape.

"Basically, (we’re hoping for) the whole town (to come out)," Pope said. "We’re looking for a good turnout, because it’s a chance for the kids and the community to come out and have a little fun. Just for once to be able to exercise and have fun all at once."

With America's John Isner finally defeating France's Nicolas Mahut at Wimbledon on Thursday in the longest-ever tennis match, here are some epic encounters from other sports:

The result came after the regulation 60 minutes, a first 15-minute overtime and more than half of another.

Garo Yepremian kicked a 37-yard field goal to give Miami a 27-24 triumph.

The University of Arkansas and The National Football Foundation (NFF) & College Hall of Fame announced today that they will jointly honor Ronnie Caveness with an NFF Hall of Fame On-Campus Salute Sept. 25, 2010 as the Razorbacks host Alabama in Fayetteville...

...Drafted by the Kansas City Chiefs in 1965, Caveness spent one year with the franchise before spending the remainder of his five-year professional career with the Oilers and Patriots. Following his playing days, he became a sales manager and also served as president of the Little Rock Razorback Club. Caveness has been named to the Arkansas All-Century Team, the Arkansas Sports Hall of Fame and the Cotton Bowl Classic All-Decade Team for the 1960s. He and his wife Teresa have two children and reside in Little Rock, Ark.

The clinic is the brainchild of NFL player agent Joe Linta, who represents Ducasse. There were 11 NFL players, all represented by Linta, helping out with the clinic. Linta works with Kurt Evans of Shelton to make it a reality every year. Evans is the NFL marketing manager for Reebok, which sponsors the event...

The event begins at 7 p.m. and $10 tickets are still available by calling the Monterey Peninsula Foundation at 655-5507 or can be purchased at the door.