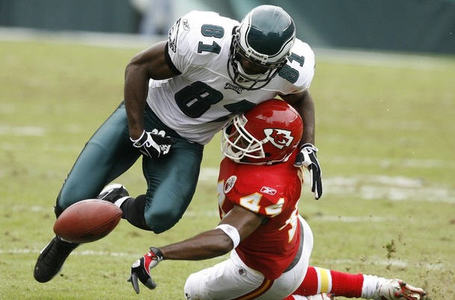 Good Morning, AP! A pretty good news day for you. There is another OTA, so look for updates later (besides, what else is Joel doing all day?). Enjoy!

E-mails to Page and his agent, his brother John Edward Page have gone unanswered all spring. Page signed on with his brother after leaving veteran agent Eugene Parker who handled him for the previous four seasons.

Page was given a tender offer by the Chiefs some three months ago of $1,759,000. That number kept the Chiefs rights for compensation had some team been interested in signing Page. He would have brought a second-round choice.

But no team signed Page, and as far as is known, no team made him an offer. The deadline for another team to make an offer was April 15th.

So essentially, Page has no leverage at all in dealing with the Chiefs. On Tuesday, the Chiefs had to extend the tender offer to maintain their exclusive rights to him. Whether or not the Chiefs did so is not something they would announce, but it doesn’t make much sense for them to pull the offer at this point.

Leonard Pope made a tough catch over the middle during the Chiefs’ offseason practice Tuesday, and most of Pope’s teammates cheered the acrobatic play. Two of those teammates, Brad Cottam and Tony Moeaki, couldn’t do much other than watch and clap.

Pope’s play Tuesday was a source of optimism for the Chiefs’ tight ends, but the presence of Cottam and Moeaki on the sideline kept the enthusiasm in check. Cottam is still recovering from neck surgery, after he fractured a vertebra during a game against Cleveland last December. Moeaki, a third-round pick in April’s NFL draft, has an undisclosed injury that has kept him out of recent team drills.

"It’s terrible. It’s hard to watch," Cottam said. "I’m trying to help the new guys and pay attention as much as I can, but you want to get out there."

"That's a clear-cut goal of ours of an area that's got to improve, to at least get pressure on the quarterback," Chiefs coach Todd Haley said. "Not necessarily getting sacks and that statistic, but we've got to create pressure and ultimately create minus plays."

Kansas City made no significant offseason acquisitions on the line and have gone with the same front seven through the first few weeks of offseason workouts. The Chiefs also will be playing under their third defensive coordinator in three years, with Romeo Crennel taking over for Clancy Pendergast, who had replaced Gunther Cunningham of the Herm Edwards era.

Look a little deeper, though, and there are glimpses of hope for hounding the quarterback.

Chiefs looking for more sacks under Crennel from The Stamford Advocate

When the R. A. Bloch Cancer Foundation began its work 30 years ago, cancer wasn’t something anyone talked about in public. My, how times have changed!...

...We helped the National Cancer Institute make the mountains of information on the latest treatment options available to doctors who were far removed from cancer specialists. Today that information is available online to patients, too, on the NCI website: www.cancer.gov.

And in 1985, we invited Kansas City area cancer survivors to a very public party to celebrate their victories over cancer. That began a tradition that continues on Sunday at the 25th annual Celebration of Life Rally, where Kansas City Chiefs legend Len Dawson will be honored as a 19-year prostate cancer survivor.

Our rally is always a very powerful experience both for cancer survivors and for those who are presently going through treatment.

As I See It: Annette Bloch on dealing with cancer from KC Star

According to a news release, former NFL players who will coach the children in the camp are: Gary Lee of the Detroit Lions, Darryl Holmes of the New England Patriots, Corey Harris of the Kansas City Chiefs, Ben Young of the Atlanta Falcons, Anthony Sessions of the Washington Redskins and Andy Gross of the New York Giants.

Also coaching will be Buddy Curry, co-founder of the skills camp and former Atlanta Falcons player.

The camp will be held Monday-June 10 from 6-9 p.m. at Tanner Park on Carl Vinson Parkway in Warner Robins to help teach children ages 7-13 football skills. Local coaches will be on hand as well to help teach.

Austin Riggs remembers looking up to the sky and thinking: "Let’s do this."

His mother, Melanie, passed away when he was in eighth grade. His uncle, Tommy Riggs, died after his freshman year of high school.

And now, just before the final athletics event of his high school career, Austin thought of them and was inspired.

State championships in three different track and field events, and all in one afternoon...

...Football — and Pittsburg State — have always been in Riggs’ blood. His father, Mitch, coached at Chetopa while Austin was in grade school. His uncle, Kendall Gammon, graduated from the university and went on to play football for the Pittsburg Steelers, New Orleans Saints and Kansas City Chiefs, even earning an appearance in the Pro Bowl in 2005. He returned to the area two years ago and began working as a major gifts officer for PSU’s athletics department.

Channeling inspiration from The Morning Sun

...No matter, Moreno, released in the off-season, will not be replaced easily. There was a sting when linebacker Cory Greenwood, selected third overall, signed with the Kansas City Chiefs.

Ten Questions facing the Boatmen from The Toronto Sun

Football fans can hear Gridiron tales right from Coach Don Shula and other NFL greats on an upcoming Crystal Cruises sailing in the Mediterranean. And the pros will be projecting "picks" for the upcoming NFL season too.

Shula, who holds the record for most career wins in NFL history, and led the 1972 Miami Dolphins to the only NFL perfect season ever, will be joined by Marty Schottenheimer, former head coach (the Cleveland Browns, Kansas City Chiefs, San Diego Chargers) and ESPN contributing analyst; Larry Csonka, Hall of Fame running back for the Miami Dolphins (and Super Bowl VII MVP in 1972); and Jim Tunney, the "dean" of NFL referees and now a motivational speaker.

Starting with the World Cup’s opening match on June 11 and running through the final match on July 11, the Summer of will feature every match of the 2010 FIFA World Cup™ shown live in the KC Live! Living Room at the Power & Light District in downtown Kansas City. The Living Room’s video screen is the largest of its type in the Kansas City metropolitan area, and the location is ideal for fans, with bars, restaurants, shops and many other surrounding amenities...

...The Kansas City Bid Committee is comprised of Kansas City Business, Community, Government, and Professional and Recreational Sport leaders to bring the FIFA World Cup™ to Kansas City. The Committee is Co-Chaired by Kansas City Chairman of the Board Clark Hunt and Cerner Corporation’s Chairman and CEO and Kansas City Wizards co-owner Neal Patterson. Arrowhead Stadium would serve as host for all games in Kansas City. To support Kansas City’s effort, visit www.goUSAbid.com/KC.

World Cup Game to be Shown Downtown at "Summer of Soccer" from WIBW.com

Eric Berry -- As the fifth player taken in the NFL draft, UT's former safety is not only assured of big bucks. His fan club membership is about to get a huge boost.

Despite playing in a small market, the Kansas City Chiefs always rank among the NFL leaders in attendance. Their fans should fall in love with Berry, who plays the game with such flair and passion, and is a solid citizen as well.

Saban on top of hot list from American Chronicle

BCarr39 Messin around wit @Royal_Flyness, I ordered the wrong wings..mouth on FIRE! #thanks

GlennDorsey72 Blanktrip... Might as well check out this sushi spot...

BCarr39 Out shopping for the lil one! #spoiled

Adam_Schefter Please help a great longtime ESPN employee, Leah Siegel, in any way you can. Thank you in advance. http://is.gd/cyDh6

Adam_Schefter As of midnight as expected, S O.J. Atogwe became a UFA. Rams still trying to re-sign him but Miami, Dallas, Minn also might be interested.