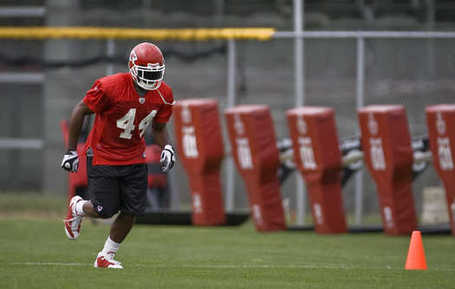 Happy Friday, AP. Not a lot of Kansas City Chiefs news out there this morning. Here's what I could find. Have to go tweet-free this morning. Sorry. Also, be sure to tune in to watch USA play in the World Cup this morning. I believe the match starts at 10am Eastern time.

There’s one name to keep in mind when it comes to the situation between the Chiefs and Jarrad Page, their unsigned restricted free agent safety: Bernard Pollard.

Wondering why the Chiefs don’t cancel their tender offer to Page and allow him to find another place to work? Bernard Pollard.

It is unlikely there would ever be a public confirmation of the mistake the Chiefs made in slicing Pollard last season as part of the final cutdown before the regular season. But, bet on the fact that internally the organization knows that situation wasn’t handled very well.

No Mistake This Time … Friday Cup O’Chiefs from Bob Gretz

Brad Cottam, once thought to be the heir apparent to the TE throne of former Kansas City Chiefs great Tony Gonzalez, is now struggling just to make the team.

The 2010 training camp could be Cottam’s final stand.

Drafted in the 3rd round (87th overall) by the Herman Edwards regime, Cottam was brought in to shadow Gonzalez as he entered the twilight of his career. Things went as planned for in 2008, with Gonzalez leading the way and Cottam playing sparingly, racking up a meager 7 catches for 63 yards.

The camp, which began Monday and ends today, is being conducted by the Gaffney coaching staff.

Former Kansas City Chiefs and New England Patriots wide receiver Willie Scott also made an appearance following Thursday’s drills to speak to the players about the importance of academics and being disciplined.

The Newberry native and former University of South Carolina standout spent eight seasons in the NFL from 1981-88.

A partnership between the University of Tennessee and AstroTurf to build a $1.5 million research center dedicated to athletic field safety has the support of a familiar face in former Vol Eric Berry.

Berry, a UT football standout and NFL safety for the Kansas City Chiefs, will be on hand Friday for the groundbreaking of The Center for Safer Athletic Fields.

The ceremony will be at 10 a.m. at the UT Institute of Agriculture's East Tennessee AgResearch and Education Center at 3209 Alcoa Highway.