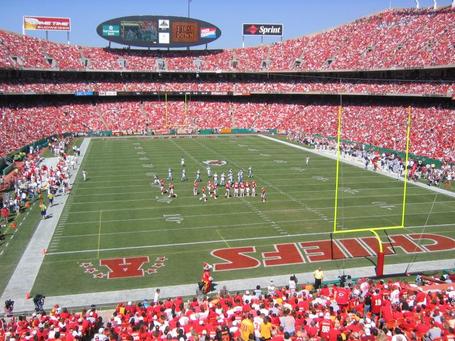 I can't believe it's already June. A light day for Kansas City Chiefs news, but there should be more as the day progresses with OTAs kicking in again. Enjoy.

There’s one thing we know for sure about Dexter McCluster – if he’s going to fit in with the other little guys that played for the Chiefs over the years, the rookie needs a nickname.

Ever since the game of football was organized into teams and then leagues, it has attracted physical freaks. Not the type from the carnival, where there’s a guy with three arms and the bearded lady. No, these are remarkable bodies that are usually big, sometimes close to 300 pounds, but with 8 percent body fat and the ability to dunk a basketball or run 40 yards in a blink of the eye.

Sometimes those unusual bodies are on the opposite end of the height/weight scale. They are quite small, yet powerful and sturdy enough to take the beating that comes from playing a game that is one collision after another for 60 minutes every week.

Just look to the Dallas Cowboys who are reportedly going to give Australian speedster Josh Ross a tryout. Ross, who competed in the 100-meter dash in the 2004 Olympic Games, is set to show the Cowboys what he can do.

According to Charean Williams of the Fort Worth Star-Telegram, Ross told The Age, an Aussie publication, that he will work out for the team...

...At the same time Hayes was finding success on the gridiron with the Cowboys, Jimmy "Oops" Hines had a failed run with the Miami Dolphins. The first man to break the 10-second mark in the 100 meters, Hines was a sixth-round draft pick of the Dolphins in 1968. He appeared in two games in 1969 and caught two passes. Hines’ career ended after one game the next season with the Kansas City Chiefs.

Cowboys Feel the Need for Speed from The National Football Post

Dexter McCluster was an exciting player to watch in Houston Nutt’s offense at Ole Miss. A second round choice for the Kansas City Chiefs, McCluster should combine with Jamaal Charles to make one of the more electric offensive tandems in the AFC.

Chief’s head coach Todd Haley was very high on McCluster out of college, rating him as one of the best running back and wide receiver prospects in the entire draft.

It’s not hard to see why.

Solari made sense as a candidate to replace Chris Foerster as offensive line coach. To start with, he has a strong resume that includes time under McKittrick for the 49ers from 1992-96 and 11 years with the Chiefs, nine as offensive line coach (1997-2005) and two as offensive coordinator (2006-07). He spent the past two seasons coaching the line in Seattle. He’s had Pro Bowl blockers at every stop.

"They’re gonna play with an attitude," Solari promised. "Whenever you see a line coached by myself, I think you’ll see an effort, an intensity by the offensive line that will exemplify that on the football field. But again, with Coach Singletary, it’s something that he looks for, that he expects from his teams. And he allows that, as far as the plays being called."

8. Branden Albert, Kansas City, T: Albert is a work in progress. But he is a talented player. The Chiefs clearly think he can be the answer at left tackle or they would have taken Russell Okung instead of safety Eric Berry at No. 5 last month.

Ranking offensive linemen in the AFC West from ESPN

3. I think the one thing that really bugged me about the NFL putting the Super Bowl in New Jersey in 2014 was this drumbeat late in the campaign that the NFL wanted to recognize and contribute to the post-9/11 recovery of the region. Puh-leeze. This was about doing a favor for the Jets and Giants owners, who went out on a limb and built a $1.6-billion stadium, and to a lesser degree about the novelty and marketing buzz of holding the game in the New York metropolitan area. It's not about helping the diner in lower Manhattan who's been struggling since the towers were felled. Awarding a game that won't be played for 13-and-a-half years after 9/11 and drawing any sort of connection to such a grave national tragedy cheapens is not appropriate.

almighty31 I want to wish the Valdosta state university softball team good luck on their game today. Bring another title back to title town.

GlennDorsey72 Jus killed tha cardio... Goodmorning and Happy Memorial Day to you all!

almighty31 The girls fought hard but fell short... U r the best in the main land still

BCarr39 @ the lake. Didn't kno it was soo dirty lol

GlennDorsey72 The best part on #footloose is on!!'

almighty31 I'm takin it in I guess. Don't want to but I got to. Unless I am entertained lol

WhitlockJason If you like rap music and you like to drink, check out @therealbigscoob and his party anthem "Salue" http://bit.ly/cs1FaR

JaredAllen69 Happy Memorial Day. Let's tip our hats to all...

JPosnanski In St. Louis to write about great Stan Musial and relationship to city. Have a Musial story? Send to musialstories@gmail.com

HermEdwardsESPN They did a good job of picking players that fit the sys.RT @SammyMojito: @HermEdwardsESPN how much do u think the KC improved in offseason.