With The 38th Pick In The 2010 Arrowhead Pride Mock Draft, The Browns Select...

Share All sharing options for: With The 38th Pick In The 2010 Arrowhead Pride Mock Draft, The Browns Select...

Sports fans, the man has me working around the clock on some top secret shit.  This greatly reduces the time I have to tell you chucks that you're fools for wanting some chump like Gerhart and that Blount is going to Carmeloize the NFL (where you at Malik Harrison?).

Lucky for me not only is my targeted guy still on the board, but I've got some eyes and ears out west that are already prepared to give the Hall of Fame induction speech for my pick.  So I'll toss this breakdown out to my man in the Bay.  The only one brave enough to wear a Marcus Allen Chiefs jersey into Oakland Coliseum.  A Cal alum far too smug to post here at AP but a man who knows his football none-the-less.  Take it away, Ge-Off...

As everyone knows, the Dawgs need playmakers. With the addition of frosted-tipped-Clausen, and the team's dedication to Cribbs, Cleveland is in a position to majorly upgrade their offense. We all have seen how speed has started to dominate the NFL (note Chris Johnson, Percy Harvin, Jamal Charles, etc.) This player will show the world that he is a first round talent, and will embarrass teams like the Chargers who overlooked him. With the 39th overall pick, the Cleveland Browns select: 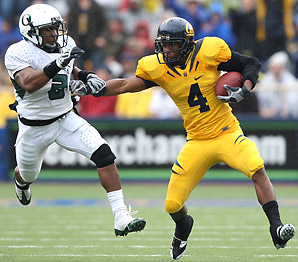 Jahvid Best, out of crunchy socialist hippyville California, Berkeley. Jahvid's name is a combination of Jah and the last syllable of his father's name, David (thought I'd throw that in there for you Rasta Arrowdread.) Best will join former Cal Bear's Alex Mack (currently is and will be the best center in the world for the next decade)[1] and Scott Fujita (who everyone loves).

I know what you all are thinking, "the last time we saw this dude he was practically paralyzed being carted off in a stretcher." 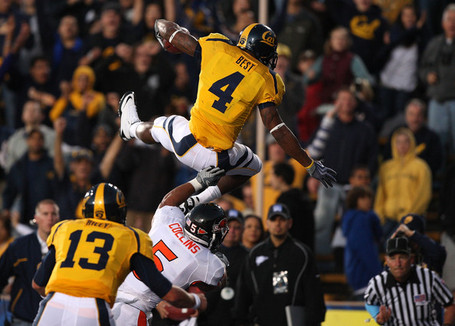 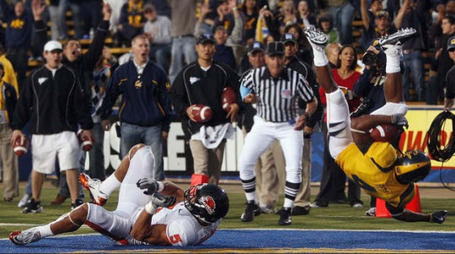 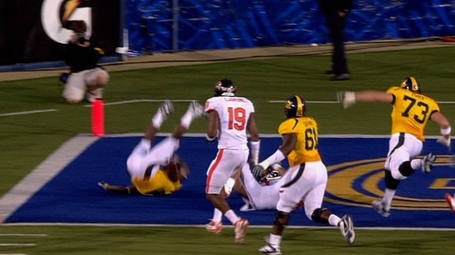 Yes I am well aware figuring I was about 20 yards away when it happened. Although it broke my heart as a diehard Cal fan, Best did the smart thing and shut it down for the year. He has passed all medical exams with flying colors and is ready to make a huge impact in the NFL.

Jahvid is extremely versatile and will be a valuable asset to the running, passing and return game. He possesses an excellent inside quickness that enables him to hit holes in a hurry. He has a special talent for cutting back in traffic, and gets to top speed as quickly as any back in the country. He is fast enough to get to the corner before the defender arrives, and Best owns a second and even a third gear in the secondary. Jahvid posted a 4.35 second 40 yard dash and a 6.75 second 3 cone drill at the NFL Combine (both fastest times posted for running backs). As a high school junior, he won the 100 meter dash at the Arcadia Invitational with a time of 10.39 seconds on an injured foot.

As a senior he won the 200 meter dash with a time of 21.40 seconds. Also during his senior year, Best won the California Interscholastic Federation state championship in the 100 meters with a time of 10.31. So yes, the man can flat out fly. He is able to break tackles on the outside and is elusive in space with shifty hips and has the ability to shake off defenders. He has great overall balance well after making a move or running through arm tackles. Best is a tremendous receiver out of the backfield with natural hands.

Best will serve as a change of pace back alongside Peyton Hillis (no one should believe Hillis is going to even remotely relevant) and Jerome Harrison (who has had exactly one big game). He also will be deadly and practically impossible to guard when he lines up in the slot with Cribbs and Massaqui on the outside.

Records:
Cal record for most rushing yards in a single game at 311, achieved on December 6, 2008 against the Washington Huskies (he was yanked early in the 3rd quarter because the game was getting out of hand. He could have easily set the all time NCAA mark had Tedford let him finish)

Set a modern era Cal record for most rushing touchdowns in a single game with five scored against Minnesota on September 19, 2009.

If I had to define Jahvid Best's collegiate career and his pro potential with one video, it would have to be this one:

Just don't pay too much attention to this one. 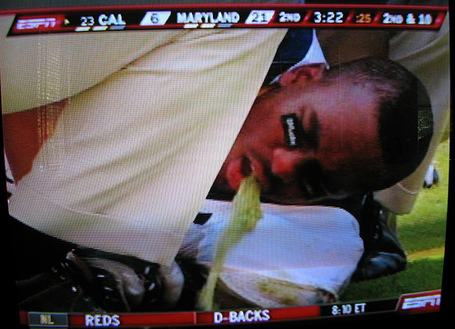 Jahvid Best and Alex Mack were both selected to the 2008 Pac Ten's First Team Offense. Jahvid obviously has the best stats in the conference and should have been hands down player of the year. But midget man Jacquizz Rodgers had one solid day against USC and the voters were convinced.