Looks Like Chiefs QB Matt Cassel Has Been Hitting The Weights 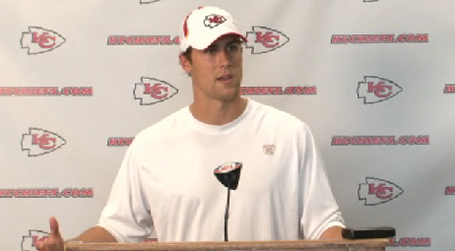 Josh Looney of KCChiefs.com mentioned earlier that Chiefs QB Matt Cassel looked "beefed up" at his press conference this afternoon.

The Chiefs have a new strength and conditioning coach in Mike Clark. He's gotten good reviews in his first few weeks with the players, including WR Chris Chambers who said they were doing some things he's never seen before.

A "beefed up" Cassel said the program appears to be working.

"There's a lot of different stuff going on and I don't know exactly how to explain everything that we're doing," he explained, "but I'm sore in places that I haven't been sore before. I'm walking around a little gingerly."

"We're doing a lot of almost like circuit training, they call it complex training. It's where you put a lot of different exercises together and it works not only your cardiovascular system, but it also works your muscles."

Cassel also had some positive words on Chambers. As we explained before, the two had stayed in touch during the Chambers one week foray into free agency.

Compared to last year, it sounds like things are going much better.