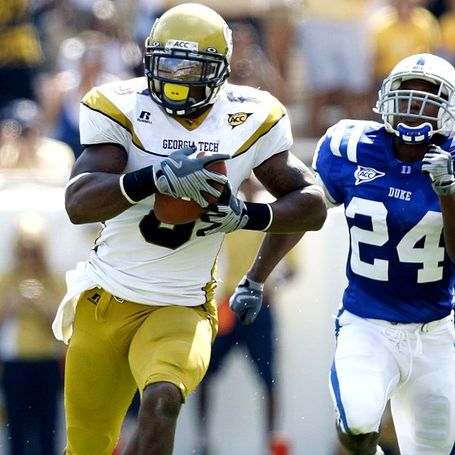 There are a lot of holes for the Rams to address this offseason. When your team is bottom five in offense and defense, the only upside is that when draft time comes around, you have a lot of versatility in who you can pick up. In fact, you can pretty much go "best player available" at any position because, let's face it, when the team's in the crapper there isn't a player on the roster who should be comfortable with his job. And in a deep defensive draft many projected that the Rams would probably try to rebuild their defense, especially considering the history of head coach Steve Spagnuolo as a defensive mind.

But this time the Rams have really lucked out. In addition to being able to select franchise QB Sam Bradford with the first overall pick, a perfect weapon for Bradford, Georgia Tech's Demaryius Thomas, has slipped through the first round and dropped onto their laps...just in time to upgrade one of the most wretched receiving corps in the NFL. You're not going to win a lot of games in today's NFL when your best receiver (Donnie Avery) led the team in receiving with 589 yards and a woeful 12.5 yards per reception, and Thomas brings the Rams just what they need to bring back the glory days of the Greatest Show On Turf. At just a shade under 6'4" and 220+ pounds, with solid top-line speed and leaping ability, Thomas will be able to get separation from coverage and elevate over defenders in the red zone to provide the Rams with the best receiving threat they've had since Torry Holt took his game on a one-season vacation to Jacksonville. With a solid record of durability in college (only one game missed due to injury) and no history of off-field problems, Thomas should be able to be slotted almost instantly as the starter at WR, allowing star running back Steven Jackson to face fewer men in the box and loosening the coverage on Avery. And with St. Louis' very solid offensive line protecting Bradford and Jackson keeping the run defense honest, Thomas should have plenty of opportunity to thrive in the Gateway City and St. Louis should be able to improve greatly on their bottom-feeding offense, while still being able to address defensive issues later in the draft. Which is why Demaryius Thomas will be St. Louis' top pick of the second round.