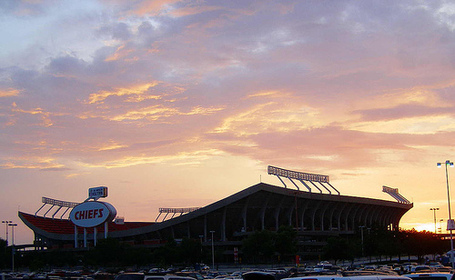 Happy Easter, AP!! Very best wishes to you and your loved ones. Here is your Kansas City Chiefs news. Not much out there this morning.

The moment that both the Chiefs and Broncos voiced their off-season opening statements through the frequency of free-agency, I sensed that an old-fashioned face-off between these ball clubs was bound to occur, in order to eventually determine the new challenger to the Chargers’ four-year old stranglehold of the division. The swiftness in their actions implied that they were serious about that notion, and that lone disposition undoubtedly gave them a simultaneous head start over the rest of the pack. But just when I thought that the next news of relevance could be expected until the day of the Draft and/or straight out of San Diego, the "information" regarding the Raiders’ interest for the one-time undisputable franchise quarterback of the Eagles made me reflect on a terrible omission committed on my part.

I had forgotten about Oakland.

THE RIGHT 53? – One of those roller coaster type players and personality, who has boom or bust stamped all over him, Hardy has shown a sensitive side to criticism from coaches. He did not handle things well when he was the object of Ed Orgeron’s demanding ways; doesn’t figure to be able to thrive under Todd Haley.

What he said – "I would hope everybody has a unique personality," he said. "I’m just me. I mean, there are just things I like to do that people don’t do here, like wear skull caps in the summer. I wear long clothes. It’s just — I don’t talk to many people, I’m not real talkative."

THE RIGHT 53? – The oldest of three brothers, Troup lived in seven different places in high school. He was the father figure in the family. During the summer, he had to walk to football workouts. "Every day I’d walk to practice and it was super hot out. I lived outside of the city and it’s not like Florida where everything is flat. I’d have to go up and down hills, but I never thought of it as a bad thing. I love football and was willing to walk the extra steps for it," said Troup. That type of dedication and desire are traits every coach loves.

THE RIGHT 53? – Saffold showed toughness in playing most of the ‘08 season with a lower back problem; he ended up missing two games with a sprained knee. Over four seasons, he was always available. Scouts think he could play both outside at either tackle, or inside at guard; Chiefs love that versatility.

What he said – "I’m a nice guy off the field, but I have a whole different persona on the field. I’m very rough. I feel that I have a swagger about myself. If I do something good, I feel good and I’m gonna show it. I don’t do a lot of talking, but I love putting people in the ground and that requires a certain intensity."

Having drawn comparisons to Reed, Berry came to the combine with his sales pitch on why he should be No. 1.

''I don't think something like a position should keep you from [being] up there,'' Berry said. ''I feel like I'm the best player in the draft because I can do pretty much anything the coaches ask.

''I can play free or strong [safety] or nickel corner. I had three TDs in college. I also broke the SEC [career] record for return yards that hadn't been broken for [59 years]. I almost broke the NCAA record for return yards. If you want to compare the big play-making ability, I did it all throughout my college career. I was a starter for three years. Never missed a game due to injury. Never missed a snap.''

almighty31 bout 2 do a lil shoppin

almighty31 Mr. Holmes walked in the theater. He still looks like he can still play

almighty31 Ppl here I tell u

Jay_Glazer To clarify, there was more than just mild interest from Skins for McNabb. Heard they even talked players http://myloc.me/5AvBF

HoltzyRoyals The #Royals have landed in KC! It is officially time to kick off the 2010 campaign.

WhitlockJason Would a Butler-Duke finale be be the Anti-Tattoo Championship? A white national holiday? I ain't bitching. Just asking.

mitchholthus Did u know Buddy from the movie Hoosiers went to college in Kansas. His real name is Brad Long and he played. @Southwestern College Winfield

eliburrell @ArrowheadPride Joel, just remember how you told me this was inconsequential a month ago. TOLD YOU something was up. Flowers/Berry