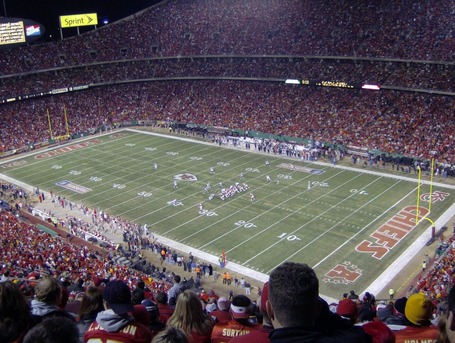 Good morning AP! Here's today's Kansas City Chiefs news from across the internet. We've got some pretty good articles, including an interview with an unsigned UDFA that thinks he has a shot at being our kickoff specialist. Discuss. Also, Thomas Jones is now on Twitter and wants followers.

Over this past weekend, the local media got caught up in the character issue. Despite the fact it’s been repeated ad nauseam since they arrived in Kansas City, it seems the Chiefs 2010 Draft class finally convinced the scribes and golden throats that this is truly the Pioli/Haley approach.

They regurgitated the mantra of character and the "right 53″ so much in their stories from the Draft that Pioli felt obliged to mention that the team did select some guys who could play football.

"We want to make sure it’s understood that we went out and got good football players here too," Pioli offered to the media.

Two home-town and national icons, the Veterans of Foreign Wars National Headquarters and the Kansas City Chiefs, have joined forces to highlight and honor the service and sacrifice of the millions of military members who have, or are fighting, to preserve our freedoms and liberties at home and abroad.

The Kansas City Chiefs and the Veterans of Foreign Wars Foundation’s "Salute to Military Families " patriotic program is expected to unite thousands of Kansas City residents in publicly displaying their support of America’s men and women in uniform during a host of events at Arrowhead Stadium and select military bases and VA medical facilities. The partnership was launched during the Chiefs’ ‘Draft Day’ on April 22 at Arrowhead Stadium.

"We’re thankful to the Kansas City Chiefs’ organization for its interest and concern for our nation’s service members, veterans and their families. Moreover, we’re especially appreciative of the incredible enthusiasm they have for showing our troops and their families that patriotic Kansas Citians care about them and are not going to forget about them," said VFW national commander Thomas J. Tradewell Sr., a combat-wounded Vietnam veteran from Sussex, Wi.

One of the agents for defensive tackle John Henderson, released Monday by Jacksonville, confirmed that Henderson will visit with the Chiefs on Wednesday. He is a two-time Pro Bowler.

The Jaguars tried to dump Henderson, an eight-year veteran, during the draft but got no takers and decided to part with him. Henderson’s production has dipped in recent years

The Chiefs will win nine or 10 games next year.

They might. I don’t know. A lot is going to depend on how well Cassel plays, that’s for sure.

Peter King on D&H: McCourty ‘will work harder than anybody else’ from WEEI.com

Some 45.4 million people viewed at least some part of the 2010 NFL Draft over the weekend on ESPN, ESPN2 and the NFL Network. That was a 16 percent increase from last year’s telecasts

A record 32.9 million viewers watched at least six minutes of the draft broadcasts.

Wrapping Up The 2010 NFL Draft from Bob Gretz

Back in January, Scott Pioli was one of those NFL types that couldn’t imagine using a high first-round choice on a safety. Todd Haley was pretty much the same, especially based on the personnel background of his youth with his father. Those great Steelers teams had at safety an undrafted college free agent (Donnie Shell), an 11th-round choice (Mike Wagner) and an undrafted college free agent (Glen Edwards.)

But the evolution of the pro game changed their minds. They studied the trends, they parsed the statistics, they split the hairs and they came to a conclusion that everyone saw when they grabbed Eric Berry with the fifth choice. That’s SAFETY Eric Berry.

Was It Too High For A Safety? from Bob Gretz

Whether Signor has to take a roster spot from Succop remains to be seen.

"I can tell you his strength," the EIU product said. "He made 24 out of 28 field goals. His kickoff it’s not his main strength but he is a good kicker."

While Signor made 14 of 22 field goals including a 48-yard last season for Eastern’s Ohio Valley Conference championship team, his forte might be on kickoffs where his 27 touchbacks led the nation.

"They do have a kicker already who had a good year," Signor said. "Hopefully something works out. I actually did already have the mini-camp offer before the draft. Coach Steve Hoffman is the special teams coach. He let me know he liked me a lot. Since they had a kicker who did so well he couldn’t offer me a free-agent contract yet."

While Tennant’s NFL prospects were helped by the popular perception of BC as "O-Line U," Gunnell was probably hurt by the Eagles’ inability to put much receiving talent into the league. Gunnell finished his career as the all-time leading receiver in program history, but, despite blowing past the athletic USC secondary in the Emerald Bowl, had to answer questions about his speed. Kansas City Chiefs GM Scott Pioli didn’t have any qualms bringing Gunnell into the fold, though, and with very little proven NFL talent behind Dwayne Bowe and Chris Chambers, Gunnell stands a decent chance at sticking with Kansas City.

Tennant Leads Eagles-Turned-Pro from The Heights

I'm probably not as down on the Chiefs draft as a lot of fans seem to be. I'm puzzled, like a lot of you, by some of their moves and apparent neglect of certain defensive positions, but I also believe in drafting good players because they are always useful regardless of position.

Here are my thoughts on the Chiefs draft, pick by pick.

Thoughts on the Chiefs draft from The Red Zone

The bar has been set for Tim Toone.

Who's Tim Toone? The Weber State receiver is Mr. Irrelevant - the 255th and final pick of this year's NFL Draft.

The previous holder of that title, former South Carolina kicker Ryan Succop, proved himself to be quite relevant.

Succop not only made Kansas City's roster, but won the starting kicking job before training camp began.

GlennDorsey72 Great workout... Shoutouts to Mike Sweeney and his family for stopping by the house today great family....

GlennDorsey72 KC yall my people but yall have the most #random weather here..

BCarr39 Ok so how do I get tickets for the concert tonight...?