Chiefs GM Scott Pioli Talks About The Value Of A Championship

Share All sharing options for: Chiefs GM Scott Pioli Talks About The Value Of A Championship 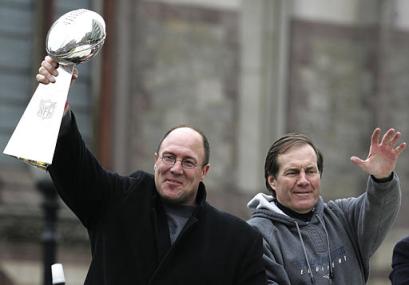 Chiefs GM Scott Pioli appeared on KCTV5's Off The Bench with Michael Coleman last night. The entire video is interesting but there was one passage that I thought was pretty cool.

At one point, Pioli was asked about his 'Individuals go to Pro Bowls, teams win championships' line and broke off into a passionate tangent on what happens when you win a championship.

Here's what he had to say:

"Later on, when I was coaching in college, I saw the impact it had on another community [and] then in my time in New England.

"We get into this because winning championships is something you can share with someone. You can share with a large group of people. Individual awards and honors is...I don't want to call it seflish but it's something that only one person can live with. It's great you collect those things but....

"I have this saying: Individuals go to Pro Bowls, teams win championships. That saying is based on, what we wanna do here is build a championship.