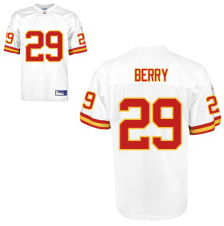 It's hard to say Eric Berry wasn't an exciting pick for the Kansas City Chiefs in the 2010 NFL draft. Early returns are showing that fans like the newest No. 29 jersey in Kansas City.

He said on 810 WHB last week that it was to honor a former teammate of his, Inky Johnson. I asked SB Nation's Tennessee Vols blog, Rocky Top Talk, about Johnson.

Inky (Inquoris) is beloved by Vol fans. A few years ago, he made a tackle against Air Force and lost the use of his arm in the process. Nerves were torn, and it was apparent almost immediately, although we wouldn't find out for quite awhile b/c they were keeping it confidential, that he'd not only not ever play football again but probably not use his arm again. He had several surgeries at the Mayo Clinic, but he apparently still doesn't have any real use of it and carries it in a sling, although I haven't really read anything on him in over a year.

That kind of injury in service of your school will always endear the player to fans of the team, but Inky's gone above and beyond that. He's got a truly infectious smile and personality, and all he'll really say about the whole thing is that he's blessed. He was Jerod Mayo's roommate Mayo's senior year, and Mayo's commented on how much the friendship has meant to him. Inky's still affiliated with the team as a Graduate Assistant, and everyone absolutely loves him. Including Eric Berry.

Thanks to Rocky Top Talk for the story (and thanks for Eric Berry).