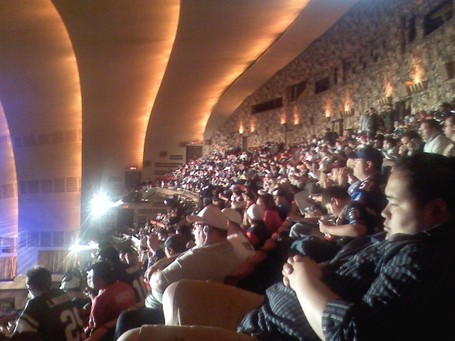 From the upper balcony of Radio City Music Hall on Day 2 of the draft.

Wow! Long post today. I apologize if I repost anything that's already been linked. There's been so much content over the last couple of days that it's hard to keep track of. Here's today's Kansas City Chiefs news from across the internet.

But any team’s draft does not go down in a vacuum that is apart from the roster that those players are about to join for the ‘10 season. Where those players fit and what holes they may fill are also important. So are the holes that remain.

The 2010 draft class was considered incredibly deep, particularly on the defensive side of the ball. But after failing to address the entire front seven through the first three rounds, the Chiefs traded up late on Friday – and took a tight end?

Is there something we’re missing here? Are there future starters sitting right under our nose and we don’t know it? Is the team so confident in young backups Andy Studebaker, Jovan Belcher, and Pierre Walters that they felt no major upgrades were needed?

Even if we put on our rose-colored glasses and assume that to be the case, it still doesn’t help fill the spacious chasm the Chiefs currently have at nose tackle. If there was one position everyone was certain the team had to find in the draft, it was a big-bodied tackle to plug up the middle.

There’s only one thing that generally smells worse than a day old diaper in the garbage can: a mock draft a day after he real thing has gone down.

A close second is handing out grades for a team’s draft class 24 hours after the selections are made.

But newspapers, magazines and websites are filled on Sunday with evaluations of the 32 teams and their 255 selections in the 2010 NFL Draft. Not a single one of those players has actually played a snap, so it never made sense to me how a team could pass or fail with its picks.

Thoughts On The 2010 NFL Draft from Bob Gretz

Chiefs No. 5B Profile: Cameron Sheffield from Bob Gretz

ESPN broadcast of the NFL draft has drawn the most viewers ever.

With the first two rounds held in prime time for the first time, ESPN's three-day telecast had 3.7 million viewers, up 27 percent from 2009. It also attracted 2.85 million households, second most in draft history and up 24 percent from last year, according to Nielsen Media Research.

Heading into this year’s pro-football draft extravaganza, which not-coincidentally puts the NFL flush in the sports spotlight despite being deep into what there is of its offseason, there was historical concern among the local faithful that the Kansas City Chiefs would once again disappoint and underachieve in its draft decisions. Being one of those naysayers myself, I am happy to report that the long-standing, disastrous Kansas City draft-history mold just may have been broken.

We won’t know for sure, of course, until we see the Chiefs’ 2010 draft selections in real-game action next season, but on paper, the work of general manager Scott Pioli and his band of player personnel brethren over the weekend appears to address some important team needs that could make the Chiefs a better football team come this fall.

After the draft ended Saturday evening, the Chiefs along with their 31 NFL brothers went about the business of signing undrafted players as college free agents.

The Chiefs announced 11 of those signings on Sunday. Here’s the first part of that group.

Brown played in 47 games with 33 starts for the Golden Gophers, with 99 total tackles, 12.5 tackles for loss and five sacks. He was a two-year starter and team captain in ‘09. Brown graduated in January with a degree in sports management. He played three years at Fairfield Prep in Conneticut, racking up 315 tackles and 21 sacks. Before that he had not played football, participating in hockey and lacrosse.

"I haven’t been playing football very long, but I’ve developed a love and passion for the game," Brown told the Stamford Advocate newspaper. "It’s something that I pride myself in. I would love to play football at the next level, instead of sitting at a desk every day. The last seven years have been incredible. I’m completely committed to becoming a Kansas City Chief now. Hopefully they have faith in me to play on Sundays."

It's a long way from Old Town to Kansas City, but that's where Tyler Eastman is heading.

The University of Maine offensive lineman signed a free agent contract with the Kansas City Chiefs at the conclusion of the NFL draft.

His signing set off a flurry of deals for the Black Bears: On Sunday wide receiver Landis Williams signed a free agent deal with the Denver Broncos.

Teammate Jordan Stevens, a former Mt. Blue running back, was invited to a Detroit Lions minicamp with a shot at earning his own contract. And running back Jhamal Fluellen signed with Hamilton Tiger-Cats of the Canadian Football League...

...Eastman, at 6-foot-6, 310 pounds, was the most touted prospect to garner NFL attention this offseason.

"I was pretty nervous. I wasn't sure what to expect," said Eastman, an Old Town native. "I had talked to a couple of teams during the day. A coach with Atlanta and St. Louis during the draft. No one from Kansas City though. But they were at my pro day."

As the final few picks of the NFL Draft ticked away Saturday afternoon, Garrett Brown didn't stray far from his phone. The Minnesota captain and nose tackle knew it would be ringing shortly.

Fifteen minutes after the draft concluded, Brown got the call he'd been waiting for all his life.

It was from the Kansas City Chiefs and, within hours, the 6-foot-2, 320-pound defensive tackle had signed a two-year, free agent contract with the NFL club. He leaves for Kansas City on Thursday.

"I'm definitely excited," said Brown, a two-time Connecticut Post All-Star at Fairfield Prep who started two years as a nose guard at Minnesota. "It's a dream come true. I'm ready to start a new chapter in my career."

Austin Signor was admittedly a little disappointed after the NFL Draft ended Saturday.

"I was really hoping to be able to sign a contract," said the kicker, who received an invitation of the Kansas City Chiefs' rookie mini camp, which begins Thursday.

Unlike Otis Hudson, who was drafted by the Bengals, and Chris Campbell, who signed a free agent contract with the Packers, Signor has to tryout to get a chance to attend Chiefs' training camp this summer. But while he said he was disappointed to not sign a contract, he's happy to still have a chance to make a team.

NFL Draft: Campbell, Signor catch on with NFL teams, as well from DenNews.com

Cole, who was signed by the Kansas City Chiefs, said he was disappointed about not being drafted, but looks forward to proving his worth in a professional venue.

"I'm definitely excited to go to camp and play with a chip on my shoulder," Cole said.

Cole added that he wants to give the other 31 teams a reason to regret not picking him up.

A pair of South Carolina players have latched on with NFL teams as free agents after getting passed over in the draft.

Offensive lineman Lemuel Jeanpierre signed a free-agent deal with the Kansas City Chiefs, the team announced Sunday, while a representative for Darian Stewart said the strong safety is headed to the St. Louis Rams.

Jeanpierre, who went to high school in Orlando, Fla., appeared in 36 games at USC, including 21 starts. After beginning his USC career as a defensive lineman, Jeanpierre switched to offense and played guard and center.

"LSU churns out players, but they aren't living up to expectations," a headline in the Kansas City Star read last week. The very well-reported story pointed out that, "LSU has produced 35 NFL draft picks since 2003, but there are more stories of failure than success. Of those 35 players, nine of whom were first-round picks, only one has been selected for a Pro Bowl: Indianapolis running back Joseph Addai's appearance as a reserve in 2007."

Actually those numbers are since the 2004 NFL Draft, but let's not get picky. The story addresses the hometown Kansas City Chiefs' misfortune with LSU first rounders -- wide receiver Dwayne Bowe in 2007, defensive tackle Glenn Dorsey in 2008 and defensive end Tyson Jackson in 2009.

The story fails to point out that the Chiefs have had problems at quarterback, which tends to retard a receiver's development. Just ask Demetrius Byrd and Brandon LaFell. And it also avoids mentioning just how bad the Chiefs have been over the last decade or so. Bad teams can tend to make very good and even great players look average. Also, the Chiefs' draft war room may have been wise to consider what many knew about Dorsey. He had some injuries. And some say the Chiefs were the only team that thought so highly of Jackson.

He wasn't the most highly touted athlete ever to enter St. Laurence High School, but by the time he left the Burbank school, Tim Grunhard had cemented his name in the annals of Vikings lore.

Grunhard, the former Kansas City Chiefs center who played 11 seasons in the NFL, was a member of St. Laurence's Class of 1986.

Thanks to his long tenure in the trenches at the prep, collegiate and professional levels, he now can claim the title of the greatest Viking of them all, as selected by the SouthtownStar .

The product of St. John Fisher Grammar School in the Beverly community is remembered fondly by his former coach, Mike O'Neill.

"He was just a great kid, a real modest kid," O'Neill said. "One of the things that stood out about him was that he was involved with more than just football. He was in student government and helped out with a lot of community outreach programs that we had, too.

BCarr39 Just laying around with my lil lady reading books

GlennDorsey72 Thinkin bout Gettin a blackberry is there a new one? Had one a while back that was horrible..

Jay_Glazer RT @rockchalk1985: @Jay_Glazer I know it'll really take 2-3 years to determine but how do you think my Chiefs did in the draft?>Berry is, in my opinion, the absolute safest pick in draft. Gonna be a stud immediately