Day three of the NFL draft at Radio City Music Hall was far and away the most exhausting day.

After day two (Friday night) was over, I went out with Brad Wells of Stampede Blue, Patrick Allen of Arrowhead Addict and NJ Chiefs Fan of, well, Arrowheadlines. The bar we went to -- the Village Pour House -- had a local flavor. 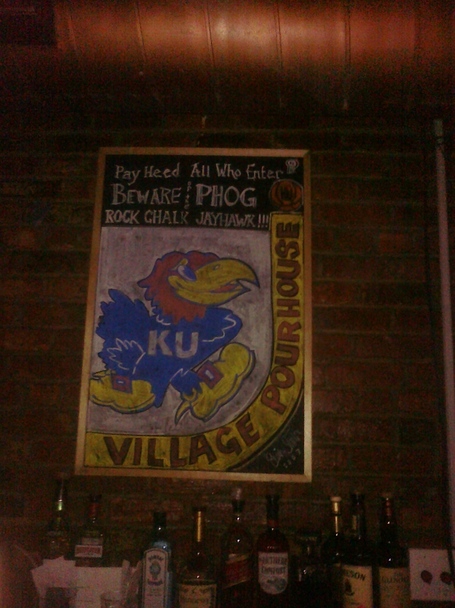 If you've read the site long enough, then you know how hard it is for me to post that picture.

The Village Pour House is a bar in New York where Patrick Allen and other Chiefs fans gather on Sundays. As legend has it, a few years back the entire back room was filled with Chiefs fans (and they got all 5 TVs).

After a couple of beers there, we left and got home around 12:30 AM....and had to be at Radio City Music Hall by 9:00 AM the next day. Suffice to say, we were a little drowsy in the morning. But, the work had to be done (and it's a stretch calling blogging and watching the draft "work", however exhausting it may be).

So we arrived at Radio City Music Hall the next morning, loaded up on coffee and began plugging away at our work.

We eventually made our way downstairs where it was a little quieter so that we could record some video podcasts. Basically, each of us talked about what happened on the first two days, gave our quick thoughts on how it went and what we thought was coming in day three. That went smoothly. .

We made our way back to our seats and, coffee in-hand, began plugging away again.

A little later we were invited to talk with Commissioner Goodell for a few minutes.

I found it interesting that most of the people we talked to just called him the Commish. How cool of a name is that? Might be better than Primetime.

I'll have the full Roger Goodell interview transcribed and posted on Monday. It went very well and I think you'll enjoy it.

From a Chiefs perspective, day three was very boring. They only had two fifth round picks and didn't make any trades.

What's interesting is that you've got all these fans there -- and on day three these are the die-hards -- who don't have laptops in front of them so they're not aware of what's going on in the NFL like we are. I'm sitting there obsessively checking various news outlets and what not so I know what's up.

So, all of a sudden, the announcer who does the picks goes, 'The Washington Redskins have traded quarterback Jason Campbell to the Oakland Raiders for an unannounced future draft pick.'

There were definitely some gasps after that.

I heard two reactions to the Jason Campbell trade from some of the media folks. 'Poor Jason Campbell' and 'Lucky Jason Campbell' -- if that makes any sense. You feel bad for him because Oakland is not a good place to play but he's lucky because it's one of the few teams in the NFL where his arrival instantly makes him the best quarterback on the team.

The announcer also announced the Leon-Washington-to-the-Seahawks trade. That was surprising. There has to be a connection. Veteran players like that aren't traded on draft day very often unless there is someone on the team who is familiar with the player and his make-up.

By the end of the fifth round, things were pretty much dead for the Chiefs. They had already drafted a tight end so there was no reason to jump back into the seventh (again) giving up future draft picks (again) to draft some tight end (again).

At the end was Mr. Irrelevant. We met Paul Salata, the founder of Irrelevant Week. He was a very nice man. He is the one who announced the pick. I'll have more on the Irrelevant stuff in a separate blurb at some point in the near future.

At the conclusion of the draft, folks were starting to pack up, saying their goodbyes and head home.

Me? I'm thinking, 'It's undrafted free agent time'. This is where we shine. I started tracking the UDFAs while Brad caught up with the Colts picks and Jason tried to process the 155 trades the Eagles made on draft day.

Eventually, we had to wind down. They were starting to boot us outta there. Since we hadn't had anything to eat since breakfast, we made our way to a place across the street. I can't remember the name of it (Brad said it was a New York staple) but I do remember I had a Bison burger, well-done with mushrooms, onions, cheddar cheese and bacon. The guys had a couple beers while I drank Coke -- I needed the caffeine.

After a good meal, we made our way back home and began transcribing interviews (Goodell for me and Mike Florio of PFT for Brad).