Share All sharing options for: 2010 NFL Draft: Todd Haley On Drafting a Returner: "It Was a Must" 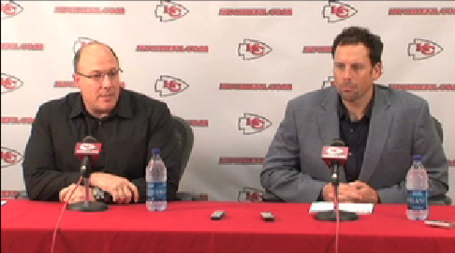 Scott Pioli and Todd Haley's post-draft press conference is up at the mothership and they both had some interesting stuff to say.

We'll be pulling more stories out of this press conference but one of the actual definitive statements that came out of it was from Todd Haley.

When asked about addressing the need for a kick returner, Haley said, "It was a must in my opinion. There are musts and there are needs and that was a must."

After watching WR Bobby Wade and WR Quinten Lawrence return kicks, I have to say I agree with Haley. Third round pick Alabama CB Javier Arenas figures to fill that returner void. When asked about Arenas, Haley had one of the cooler compliments I've heard. He said, "Something that sticks in my head that was said by one of our scouts is he acts like it is the Super Bowl every day."

I'm keeping a close on undrafted free agents for now so check out the full video and transcript of the press conference at the mothership. Both Haley and Pioli seem pretty happy with the draft.