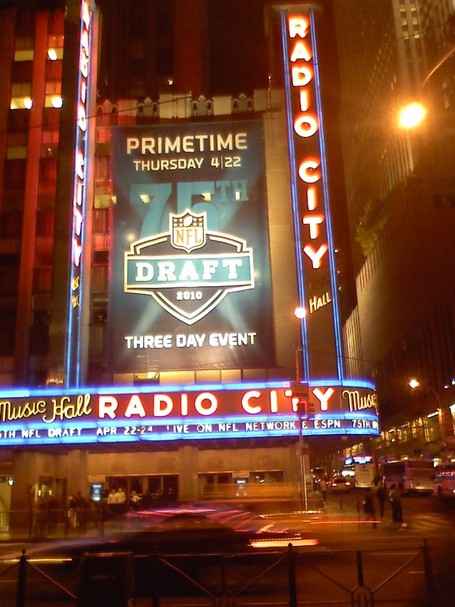 Took this pic as I was leaving the Draft last night. (Photo Source)

Oy. Got back from the draft and drinking too much hanging out with Joel and Patrick (from Arrowhead Addict) at about 3 this morning. Gonna do this post and go back to bed. Now your Kansas City Chiefs news.

The Chiefs stood up for the little guys with their two choices in the second round of the NFL draft.

Between them, Mississippi running back Dexter McCluster and Alabama cornerback Javier Arenas weigh just a few pounds more than 335-pound offensive lineman Colin Brown, the heaviest of the Chiefs.

The Chiefs are hoping McCluster and Arenas make up for their small statures with outsized impacts and dynamic play. Both were fast, productive players in college.

There’s so much to talk about with all the decisions that went down on Friday in rounds two and three of the 2010 NFL Draft.

The Chiefs alone produced plenty of discussion points, but we’ll save those for the next few days as they have two more picks to make and heaven knows what else might happen. You’ve got to hand it to GM Scott Pioli: he loves to trade picks so he can draft tight ends.

Why take a running back/third receiver when the Chiefs have Jamaal Charles and a gaping hole at No. 1 receiver?

The pick seemed odd at the time.

With the 68th pick, Pioli tabbed an offensive guard, Illinois’ Jon Asamoah. Wow. After the offseason acquisition of Ryan Lilja, guard is one of the strongest positions on Kansas City’s roster.

And finally, after trading for a late third-round pick, Pioli picked an injury-prone tight end from Iowa, Tony Moeaki.

The common thread connecting all the players is high character.

Character counts for Chiefs at draft from KC Star

FAMILY – Dad is Marcus McCluster, Mom is Wendy Hall. He has a three-year old daughter.

Chiefs No. 2A Profile: WR/RB Dexter McCluster from Bob Gretz

FAMILY – Son of Facunda Arenas. He has four brothers: Jeno, Armando, Michael and Marco and one sister Jetta. His older brother Armando Murillo played for two seasons as a defensive back with Nebraska, starting 24 of 25 games during the 2007-08 seasons. His cousin is NBA player Gilbert Arenas.

Chiefs No. 2B Profile: CB Javier Arenas from Bob Gretz

Three of the four picks were known as "playmakers" in college.  McCluster was a tremendously underrated SEC running back during his time at Mississippi.  Arenas was one of the leaders of Alabama's top-ranked 2010 national championship defense who is also an elite special team player.

Asamoah is a tough, mean-spirited guard that carries a warrior's mentality onto the field, while Moeaki was shooting up everyone's draft boards.  The Sporting News has Moeaki rated as the #2 tight end in the draft.  They compare him favorably to the Houston Texans Owen Daniels, one of the best pass catching tight ends in the NFL.

Berry gave a nod to the Troy Polamalus, Ed Reeds and Darren Sharpers who have changed the safety position from late first-round afterthought to valued impact player.

Sharper, with the Saints and Pittsburgh's Polamalu each played for the last two Super Bowl winners.

"I think other guys helped me to get to this position because a lot of GMs and coaches have seen those guys and how they performed on their teams and how much they have affected outcomes of games. They pretty much paved the way for me in the draft.

The Kansas City Chiefs picked Tennessee safety Eric Berry in the first round of the NFL Draft last night. Here's six reasons to be excited.

Two days into the three-day NFL draft, the Kansas City Chiefs have become quicker and more athletic and probably quite a bit better at returning kicks.

They're also better led. Everybody the Chiefs took with their first five picks were known as leaders on their college teams.

"One of the things we set about to accomplish when we took this team over," second-year general manager Scott Pioli said Friday, "was to improve our team speed. We became a faster football team today. Along with team speed ... all four guys we drafted today and the player we drafted yesterday happened to be captains at the school they played at."

Chiefs stock up on speed, quickness in draft from The Associated Press

"Watching each selection was excruciating," the Rich East High School and University of Illinois graduate said. "I had to leave the room and go sit on the porch.

"I'm glad the wait is finally over. I'm glad I got to share this family moment at home with my family members and close friends.

"I was hoping to get drafted by some team in the Midwest, so Kansas City is pretty close. But I really didn't care what team drafted me. I was ready to go anywhere."

Asamoah bound for Chiefs from The Southtown Star

Arenas was projected as a third-round choice by most draft services, but ended up being a second-round choice and the third Alabama player chosen in the draft.

Efforts to reach Arenas were unsuccessful.

Arenas ranked third on the team in tackles last season with 71, starting 13 games. He made 12 tackles for loss, including five sacks, and ranked second on the team in interceptions with five.

Arenas goes to Chiefs, Johnson to Falcons from TideSports.com

Congratulations! You've just made the wonderful decision to draft Tony Moeaki! Like most new Moeaki owners, you're no doubt filled with questions about your new family member. We here at Black Heart Gold Pants will try our best to answer any questions you might have.

We drafted Tony Moeaki. That's a good thing, right? It certainly is, just as long as you pay no attention to that giant honking IF: his injury status.

BCarr39 Just remember: there is a method to the madness. When the dust settles, you'll see ;)

JarradPage44 RT @RosaAcosta I wonder how many couples met on twitter?<<Probably close to none. Lol

JarradPage44 RB's too if y'all think y'all runnin or catchin the rock. Ppl say I been quiet. Well I'm talkin now chiefs fans

kentbabb FYI: The Chiefs will officially list McCluster as a wide receiver.

JoshLooney Already getting excited about the versatility the Chiefs offense can utilize with Charles, Jones and McCluster on the field at same time

kentbabb Good strategy, Chiefs. Way to not address your needs in the second round.

JoshLooney Asomoah is rated by many as the 2nd best Guard in the draft behind Iupati...I consider Iupati a tackle

JoshLooney Pioli hinted at possible center time as well RT @ryanjames28: @joshlooney I wonder if asomoah will play RG and lilja move out to RT

ChiefsPR Another productive day at Arrowhead . . . All five players the Chiefs have picked thus far were all team captains a year ago.