I know I'm a little late wrapping up day one but things have been very busy around here.

(If you define "busy" as eating bagels and drinking coffee in sweatpants three feet in front of the TV all morning.)

I'm just going to give a quick rundown of my day yesterday...

I left Kansas City very early. In fact, it was so early Ms. Primetime would not give me a ride to the airport and Old Man Thorman had to hook me up. I was in New York and in my cab by 10:30 AM so things worked out pretty well.

I'm staying in Brooklyn with BigBlueShoe (a/k/a Brad Wells) of Stampede Blue. Very cool neighborhood with little shops all around. Very busy, too. A little change compared to Kansas City.

After a bite to eat -- we ate at Teddy's on Berry St. -- we packed up our things and headed to Radio City Music Hall. 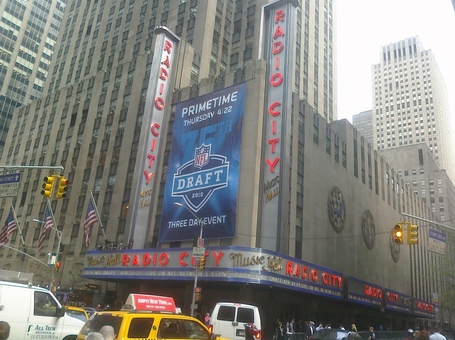 We walked around to the side to enter the media entrance when we got. As I turned the corner we bumped into the Commissioner. 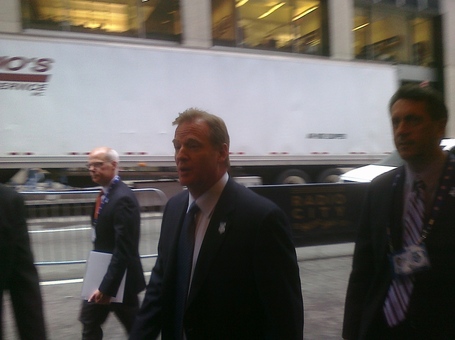 Side note: Later in the day I literally bumped into the Commissioner. I was walking back into the building from the red carpet and saw a gentleman from NFL security come walking down the hall. I had remembered seeing him from the Super Bowl in Miami. He was memorable because he was always with the Commissioner. Sure enough, a second later as I opened a door to walk back into Radio City, I bumped right into the Commissioner. We both said excuse me, I got a pat on the shoulder and we were on our way.

Moving on into the building. The lobby was like a movie theater lobby. There was a concession stand with popcorn, snacks and drinks. They were also capitalizing on all these die-hard fans coming by putting out a bunch of hats, shirts and other things like that.

After checking out what was on the menu for later that night, I got to my seat. Here's my view: 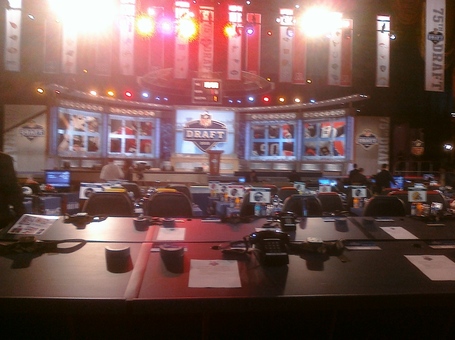 After that, it was all blogging, all the time. I was updating AP, doing some work for SBNation.com and generally pretty busy the entire time.

The fans started to congregate in the upper-level seating at Radio City and some started chants and cheers. Overall pretty tame stuff (until the Steelers pick -- more on that later).

The Chiefs came on the clock and I was very nervous to be honest. I wanted to know who the next Chief I'd be covering was. After the Chiefs 15 minutes was up, the announcer in the building said, "Kansas City's pick is in. Seattle's on the clock."

Fans started cheering. There were a contingent of Browns fans there who really wanted Eric Berry and they were cheering for him loudly.

About a minute later, as Roger Goodell was preparing to walk on the stage, NFL Network showed Eric Berry in the green room getting a phone call. Of course now we know that call was from Clark Hunt, Scott Pioli and Todd Haley.

Eric Berry was the newest Chief.

I ran up to the front of our seating (and was told to step down by security) so I could snap this photo. 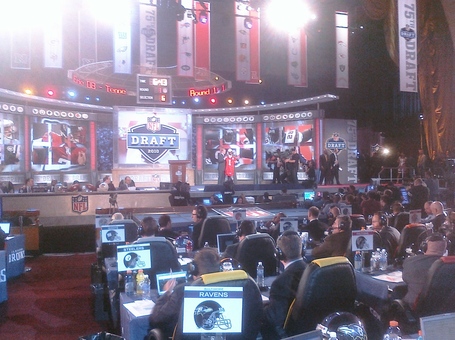 Once he was selected, I made my way downstairs to where the press conferences are held. I got into the room as the third pick, Gerald McCoy, was finishing his up. A few minutes later and in walked Mr. Berry. 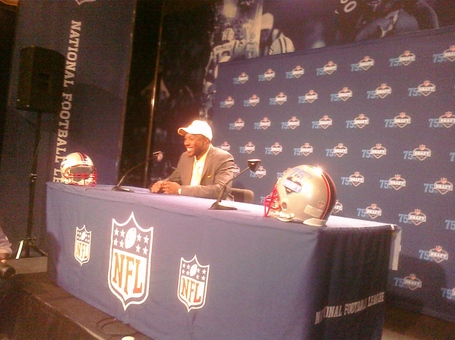 He had some very good things to say. I was only able to get one question in. He had mentioned that he worked out with Brandon Flowers so I asked him what Flowers told him.

After that was over, he signed a few things for military folks who were there. 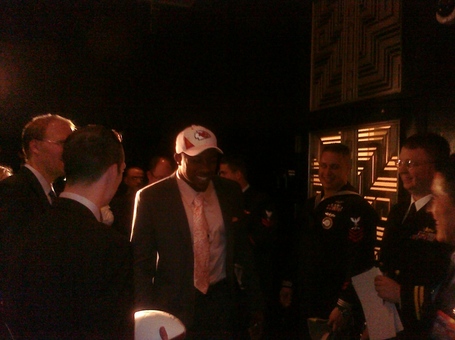 I was able to relax a little more for the rest of the draft.

By far the most bizarre moment was the Steelers pick. So, Roger Goodell comes on the stage to announce the pick and along comes a little boy who was there with the Make-A-Wish foundation. The whole set-up seemed a little strange particularly when you know the Roethlisberger situation.

So, Goodell walks to the stage with this young kid in a Steelers jersey. The fans reaction?

Goodell was clearly embarrassed. I was a little surprised myself.

After that, the rest of the round really went by pretty quickly and, after we wrapped it up, I headed out. 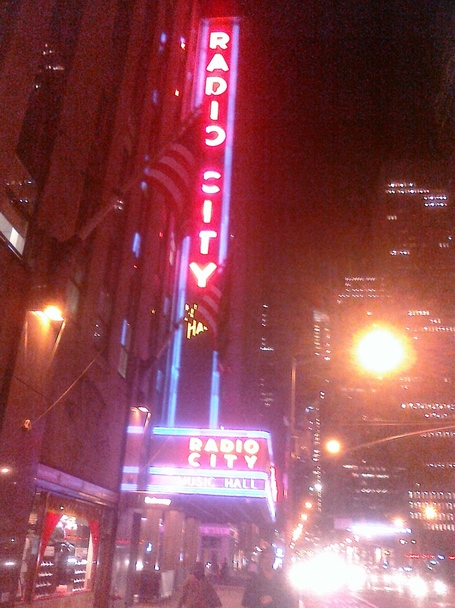