With The 60th Pick In The Arrowhead Pride Mock Draft, The Seattle Seahawks Select...

Share All sharing options for: With The 60th Pick In The Arrowhead Pride Mock Draft, The Seattle Seahawks Select...

Matt Conner with the pick...

The Seahawks continue to have a lot of needs, even after using their two first-round picks to shore up their roster. Grabbing Brian Bulaga and C.J. Spiller ignite an offense that's in need of lots of help, and now the team has a star RB and left tackle to take things to the next level. While it might be wise to go defense and grab some pass rushing capabilities, the team's biggest hole still remains on the offensive line. 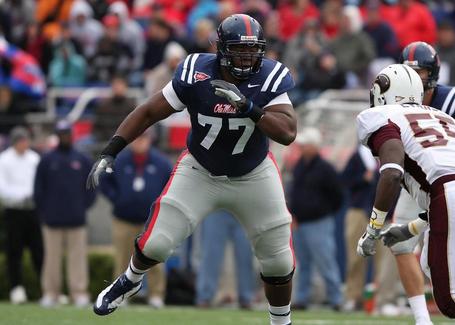 After trading guard Rob Sims to the Lions, needs are still there on the front five. And because a guy like John Jerry is available here in the second round, it's wise to go ahead and continue to add to the offensive trench since the team is counting on Charlie Whitehurst or the fragile Matt Hasselbeck as its primary signal caller.

Here's what Wes Bunting from the National Football Post has to say about the versatile Jerry:

A king-sized lineman who plays RT on the Ole Miss offense, Jerry simply lacks the athleticism to consistently reach the corner vs. speed off the edge. He showcases good lateral mobility and redirection skills for his size but lacks the quickness to hold up on the outside in the NFL. He has the makings of a physical inline guard at the next level where he can use his power and strength to maul defenders in the run game. Jerry possesses long, strong arms and powerful hands. Once he locks on in the run game, he does a great job pumping his legs and driving defenders off the ball. He can certainly anchor at the point of attack in the pass game, and once he gets his hands on an opponent, the battle is over. He is a Leonard Davis-type guard at the next level.