With The 59th Pick In The Arrowhead Pride Mock Draft, The Dallas Cowboys Select...

Share All sharing options for: With The 59th Pick In The Arrowhead Pride Mock Draft, The Dallas Cowboys Select...

Matt Conner with the pick...

Seeing as how I'm making this pick (which is different than round one), I can't believe the Cowboys wouldn't go with an offensive tackle in the first round after releasing Flozell Adams and then relying on a safety in round two. However, since the choice was flipped around, the Cowboys simply must address the offensive line in this round in the draft.

The Boys line got exposed in this year's playoff game versus the Vikings and the line in general quite experienced. That's good news if they can still perform at a high level (which they might), but we all know how quickly age can set in for a player, or even a group of players. Because of this, the Cowboys should look to get younger on the line and at the tackle position if at all possible.

With that said, there's definitely been a drain at the tackle position in this draft and even in the interior positions as well. But one name often-mentioned around these parts still hasn't been taken: 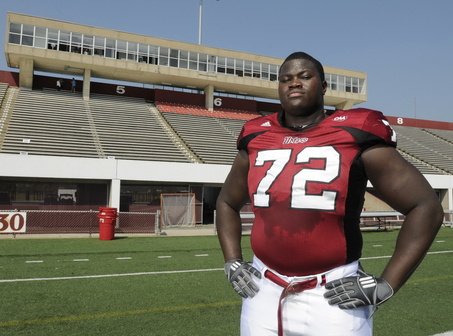 From Mocking the Draft:

After just six years of playing organized football, Vladimir Ducasse has developed in to one of the more intriguing prospects in the 2010 draft class. An AP All-American, the Haitian native showed glimpses of being a dominant force within the trenches while participating in the Senior Bowl down in Mobile. It is easy to notice how raw of a player he is, as his technique in space is very inconsistent and he does not always appear to be comfortable on the edge.