Over the course of the next few days, we're going to be posting official predictions from the Arrowhead Pride staff. That includes myself, Joel Thorman and Matt Conner.

Matt was first and now, obviously, it's to me.

I haven't been able to comment as much as I've liked to recently, but that doesn't mean I haven't been reading nearly all of the comments on AP. Like you, I've read (and probably heard) it all - left tackle, safety, linebacker, defensive tackle, wide receiver...the list goes on.

When we put this idea together, the whole concept of having to make an "official" prediction for the Chiefs' first pick really made me think long and hard about who to choose. Joel's thinking Alabama LB Rolando McClain as of late. Matt chose Oklahoma St. WR Dez Bryant with the first edition of this post. I think I can probably speak for all of us when I say that the ideal situation is to have the Chiefs trade back and select virtually any of those positions I mentioned before. It's wide open if that happens.

So, who did I choose as my official selection for the Chiefs' first draft pick? 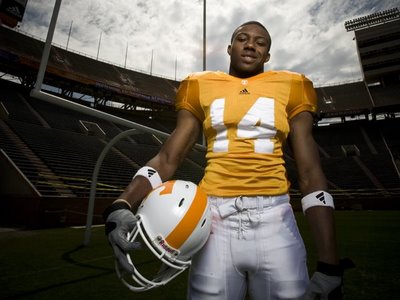 Okay, the last thing I want to do is start another thread about drafting Eric Berry. I'll simply say this - I think he's a special player and I don't think Scott Pioli and Todd Haley will be able to ignore a player of his caliber.

Keep in mind I chose Berry because I think there is a legitimate chance that the Chiefs draft him at #5, if they're forced to actually make that pick after not being able to trade down.

So. How about that? Eric Berry. Let's talk about that.