Share All sharing options for: Royals May Have To Re-Schedule To Make Room For The Chiefs

The Chiefs are scheduled to host the Chargers on Monday Night Football on September 13th at 9:15 PM.

That same day night, the Royals are scheduled to host the A's in Kauffman.

If you don't understand why this might be a problem, then you probably haven't visited Arrowhead. 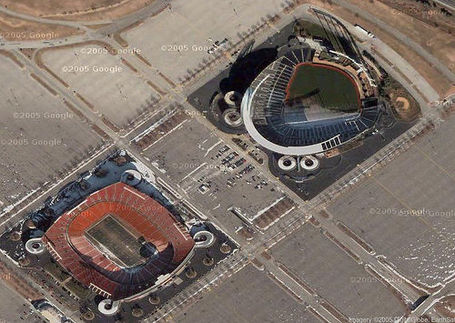 ...They share a parking lot. It would be pretty intense if both games were played at the same time (Insert Royals attendance joke here).

Adam Teicher of the Kansas City Star says the Royals will have to have some movement on their game time to accommodate the Chiefs.

I seem to recall years back that the Chiefs played a preseason game at Arrowhead at the same time the Royals played in Kauffman. Anyone else remember that?