With The 56th Pick In The Arrowhead Pride Mock Draft, The Green Bay Packers Select...

Share All sharing options for: With The 56th Pick In The Arrowhead Pride Mock Draft, The Green Bay Packers Select...

In the first round the Green Bay Packers addressed their issue (as Craig in Calgary stated) with Aaron Rodgers being knocked on his ass early and often by taking OT Charles Brown. Additionally the Packers have resigned Clifton and Tauscher their starting tackles from last year solidifying the group for the near future. They are two tackles that while older have a ton of value to them. So far in free agency they have managed to keep the bulk of their roster intact while avoiding the trap of over-paying mediocre and injury risk players.

Positions that the Packers GM Thompson appears to be targeting for upgrades or depth are guard/tackle, safety, outside linebacker and corner back (nickel back).

This draft has excellent depth at many positions. When the Packers second pick was coming up I scoured the draft prospect rankings looking for a player of need that had tumbled to the bottom of the 2nd round. A few players I was targeting were scooped up before I had a chance but one name kept showing up that intrigued me. 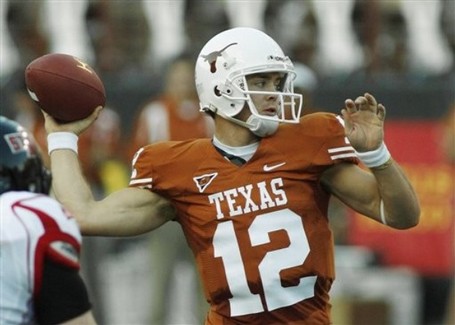 Colt McCoy QB from the University of Texas.

I know it isn't a position of need for the Packers so I thought the chance of Green Bay picking him would be slim but then I thought back and remembered that the Packers did this previously. In 2005 Green Bay selected a QB who had slipped to them at 24.  Even though they had Brett Favre slinging the ball all over the place they realized the potential of letting a QB mature behind a future HOF on the bench.