With The 27th Pick In The 2010 Arrowhead Pride Mock Draft, The Dallas Cowboys Select...

Share All sharing options for: With The 27th Pick In The 2010 Arrowhead Pride Mock Draft, The Dallas Cowboys Select...

Well, well, well...looks like Jerry Jones has a big decision to make here. This is the first top-end draft pick in two years for the Dallas Cowboys, so this pick really has to count. This pick, like most first round picks, especially has to be somebody that can come in and start, or at least compete for a starting job.

When you take a look at the Cowboys roster, this team is pretty well loaded with solid starters both on offense and defense. The real "problem" with this team is their depth, that I am sure will be addressed in the later rounds.

The very few spots where first string talent is lacking is safety(pretty much both positions with the recent release of Ken Hamlin), offensive line, and some would even say wide receiver. Unless Dez Bryant falls to number 27, I doubt there is any WR that Jerry would consider drafting with his first pick. (I personally believe that situation will be dealt with via trade before the draft.) An offensive lineman COULD be drafted, but so far all the top lineman prospects have been scraped clean so I doubt JJ will spend his #1 on a top second round lineman. It's just not his style.

So that leads me to the 2010 Dallas Cowboys' first round pick... 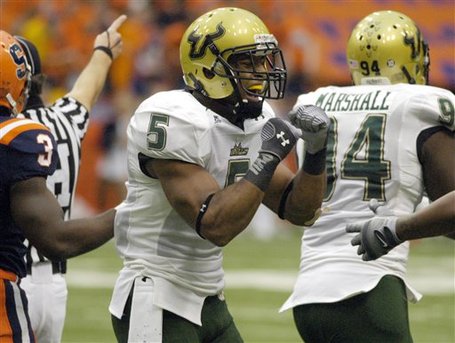 I know what you may be thinking. WHAT? No Taylor Mays?

If anything, Jerry Jones does not want history repeating itself with a pick such as this. You may remember such a person named Roy Williams that was VERY similar to Mays coming out of college, if not MORE hyped. A very athletic, quick, hard-hitting safety that his only problems come in his COVERAGE ability. Uhhh hello? Coverage is what the safety position is all about! Save the hard hitters for your linebacking corp. Even though Mays may be considered MORE athletic than RW, he is still a liability in coverage and was always looking for the "big hit" instead of just pulling his man down, and Mays' last year in college magnified this fault. Jerry may love him some athletic individuals, but he's no Al Davis. I think the Cowboys actually want to WIN games.

Nate Allen is a very underrated prospect coming out of South Florida, has good size and very nice speed, good hands, and most importantly fills a huge void in the Cowboys' secondary.